First Landing State Park, located on Cape Henry just north of Virginia Beach, has 2,888 acres of camping, cabins, hiking, biking, swimming, fishing, shelling, boating, trails, and overall wonderful relaxation with a 1.25 mile beautiful beach on the shores of the Chesapeake Bay. There is also an air-conditioned nature center that tells the story, in large relief, of the first landfall of the Jamestown settlers on April 26, 1607 after a 144-day voyage from England. 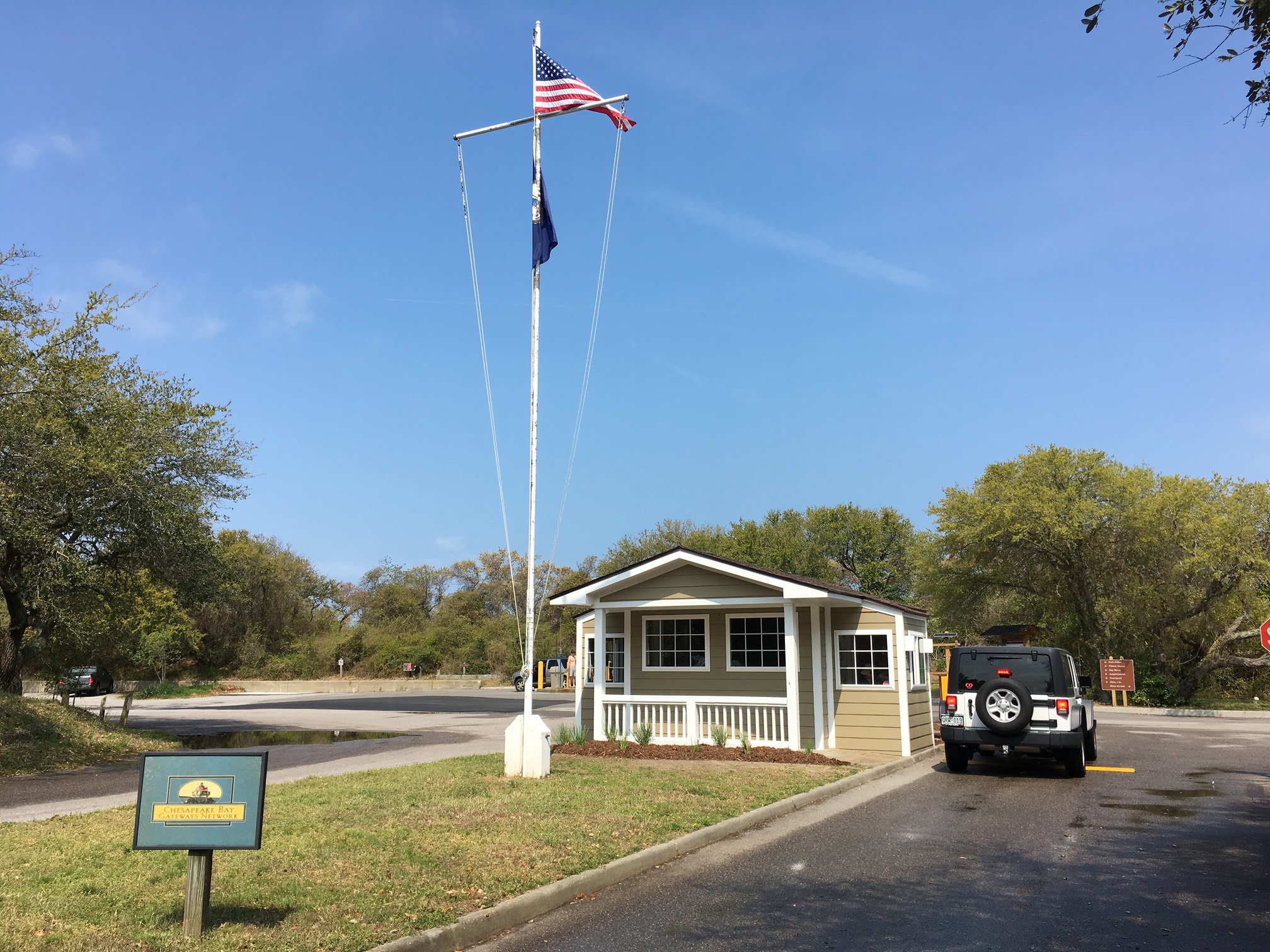 Driving north to First Landing from one of the hotels along Atlantic Avenue on Virginia Beach is easy; it’s only eight miles each way. The address for First Landing State Park is 2500 Shore Drive, Virginia Beach, VA 23451; the main entrance is located off of Route 60/Shore Drive which leads to the information center plus the bay beach. The entry fee for out-of-staters, per car, is $5 on weekdays and $7 on weekends. 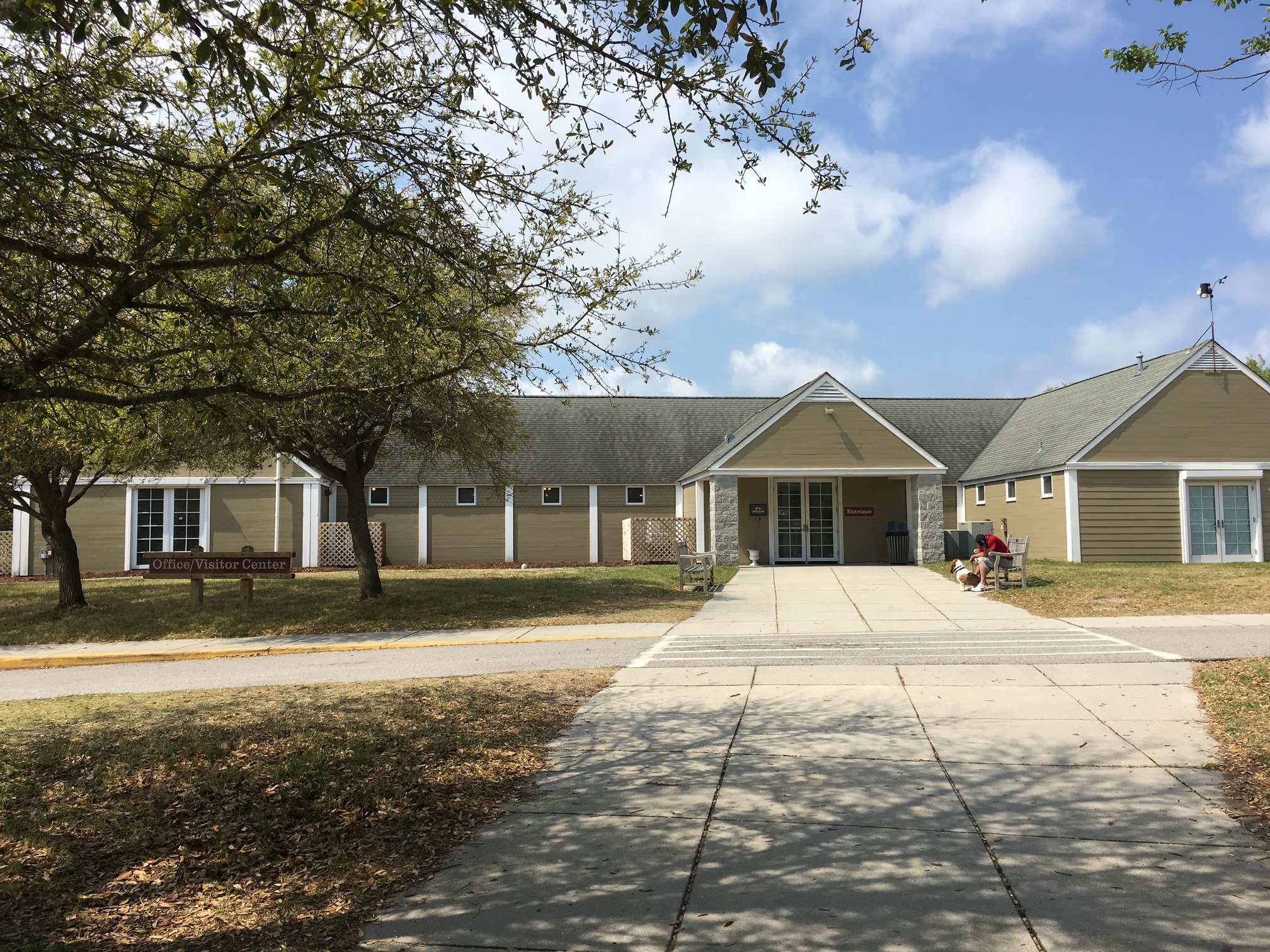 A little background: this state park is named for the First Landing of English explorers at Cape Henry in April 1607. Their voyage actually began on December 20th, 1606, departing from Blackwall (now part of London), England, with Captain Christopher Newport in charge. The three ships involved finally reached the West Indies (Martinique) on March 23rd, 1607. 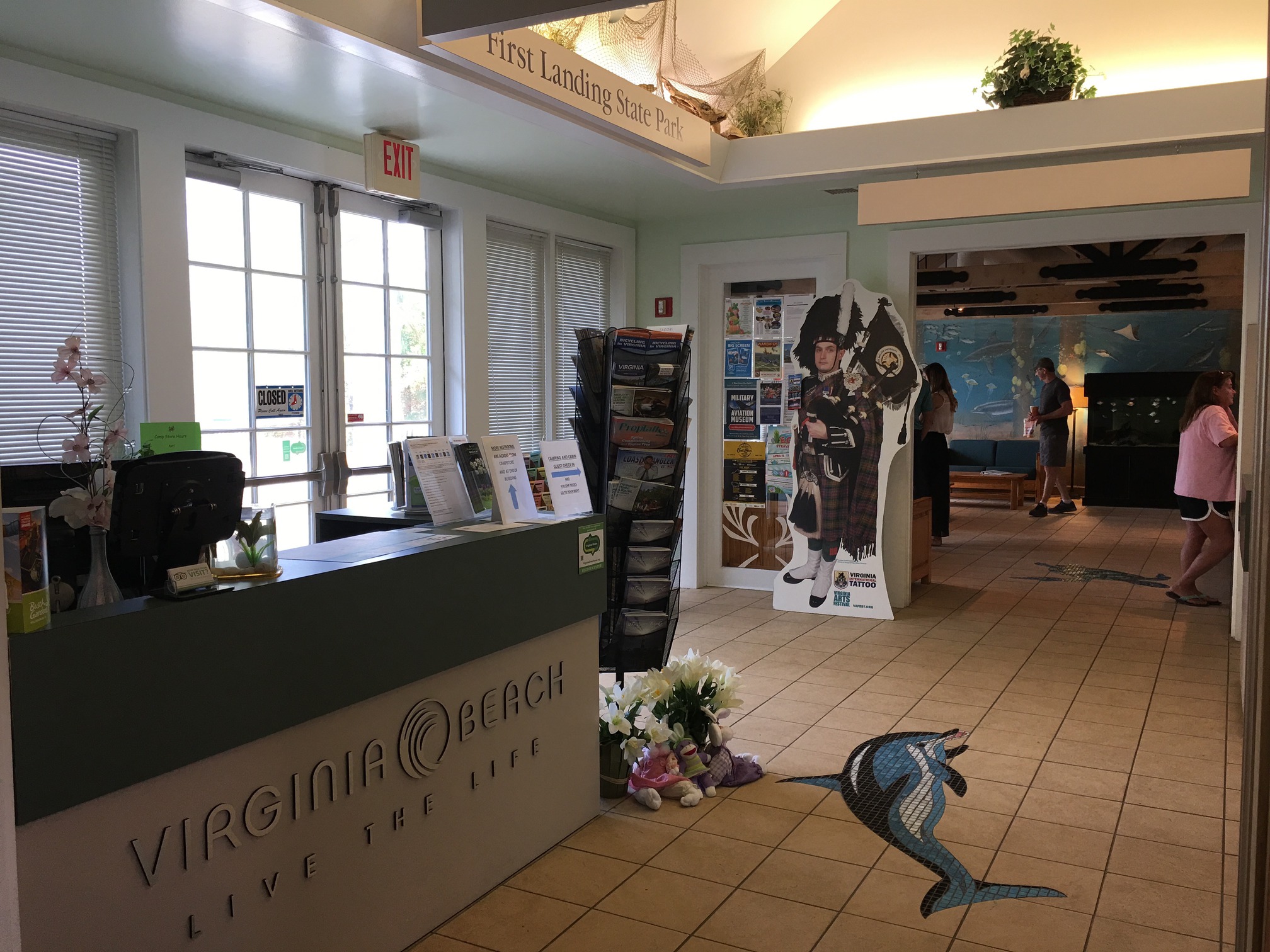 The three ships—Susan Constant, the Discovery, the Godspeed—stopped at Puerto Rico on April 6th, 1607, to get more supplies. The 140 Englishmen and the ships landed in Virginia twenty days later to create the first permanent English settlement in the New World, Jamestown. 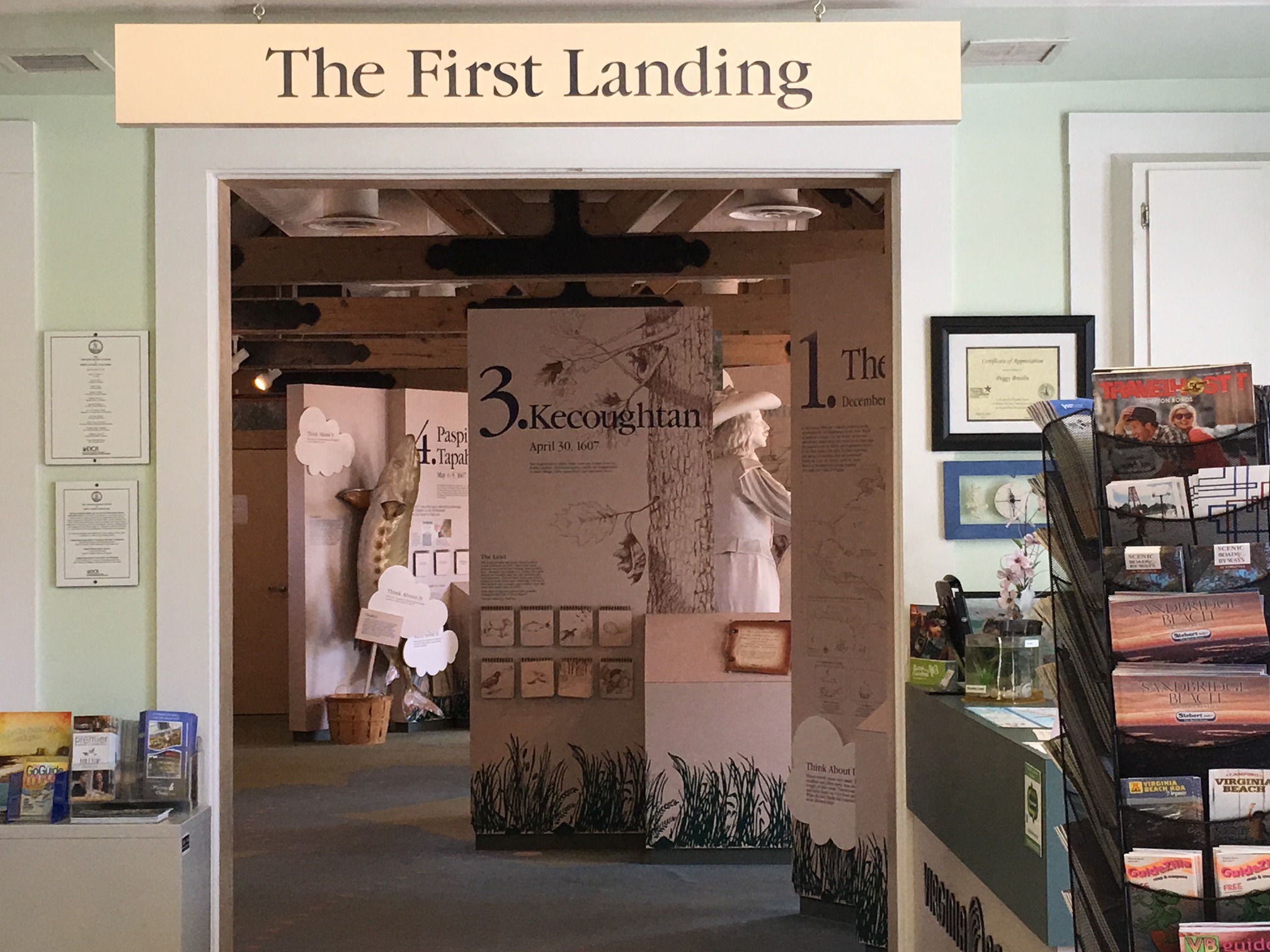 The First Landing story is told in great detail here, and is fun for all ages; an hour is adequate time for this section of the Visitors Center. Nearby Cape Henry is named for King James I’s elder son, Prince Henry Frederick Stuart, the site of the first landfall. A cross erected in 1935 by the Daughters of the American Colonists marks the site near the Cape Henry Lighthouse. 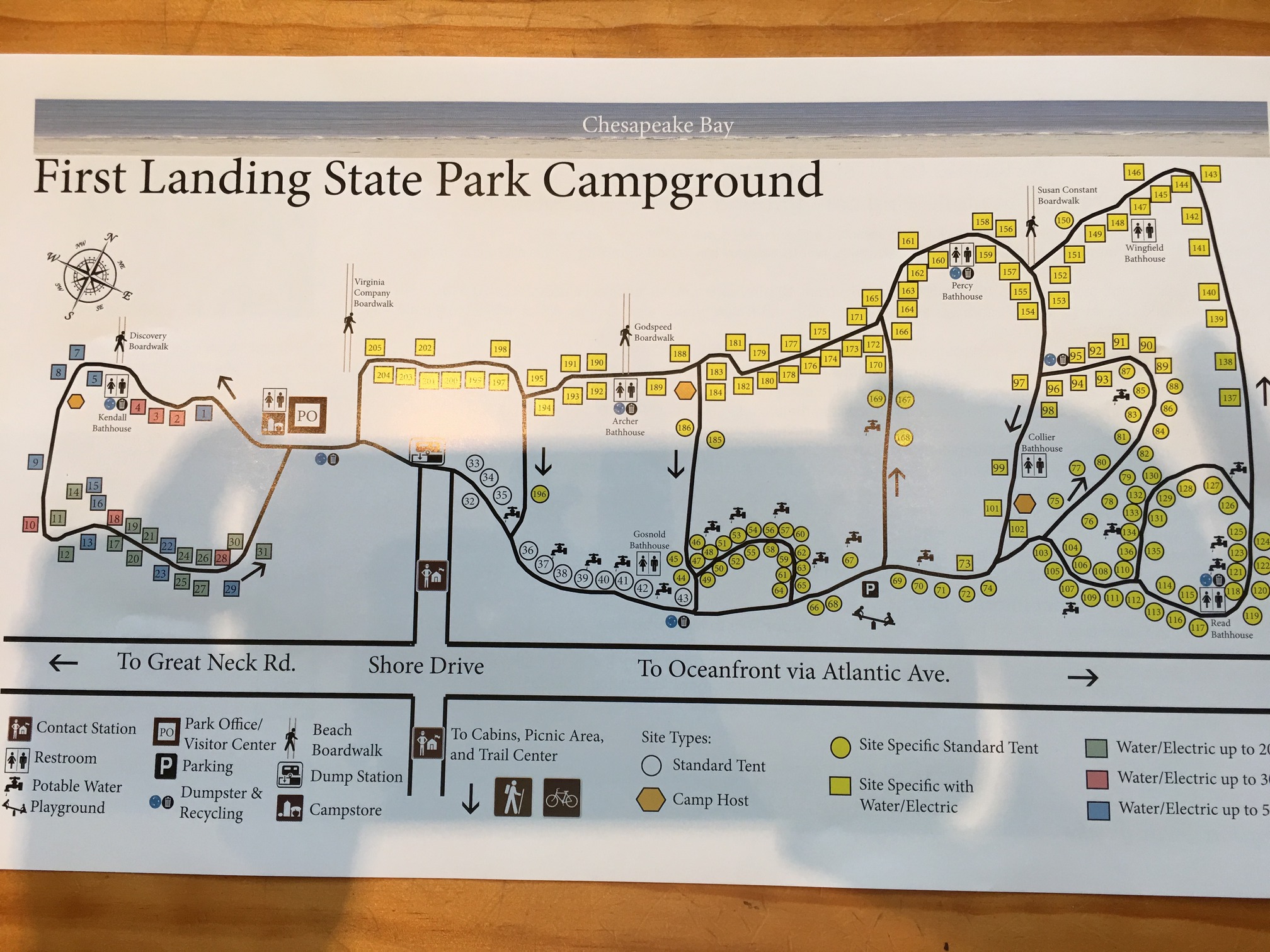 This campground map at First Landing State Park is the most up-to-date map available and is in the visitors center. Also in the visitors center, in addition to the walk-through timeline, are a wonderfully large fishtank and a very comfortable couch, a camping coordinator, and helpful rangers. There is lots of parking here, and at the far end of the lot are a water pumping station for campers and a drinking water source.

This beautiful boardwalk leads straight to the Chesapeake Bay Beach. It is called the Virginia Company Boardwalk in honor of the Virginia Company of London, which in 1606, provided the funds that launched three English ships to the New World to establish colonies in North America. Fun fact: the voyage was also an effort to locate the lost colonists of Roanoke. 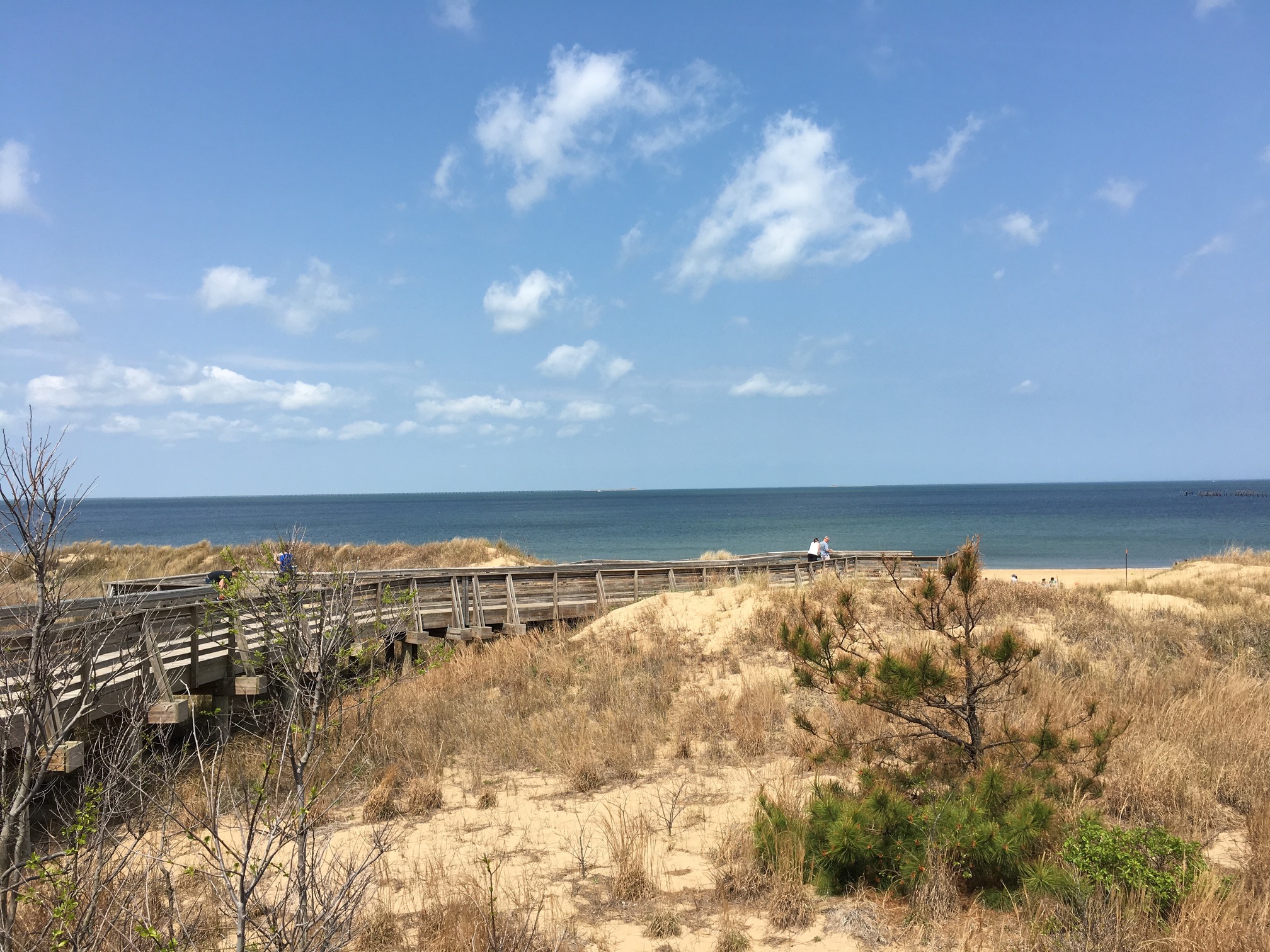 There are three other boardwalks at First Landing: the Susan Constant is the easternmost, between the Wingfield and Percy bathhouses near camping units 150-157; the Godspeed, a few paces west of it, and the Discovery to the far west. These are named after the ships that the Virginia Company set sail in December 1606. Godspeed leads to restrooms at the Archer Bathhouse near camping units 189-190, and the Discovery Boardwalk leads to restrooms at the Kendall Bathhouse near units 4 and 5. 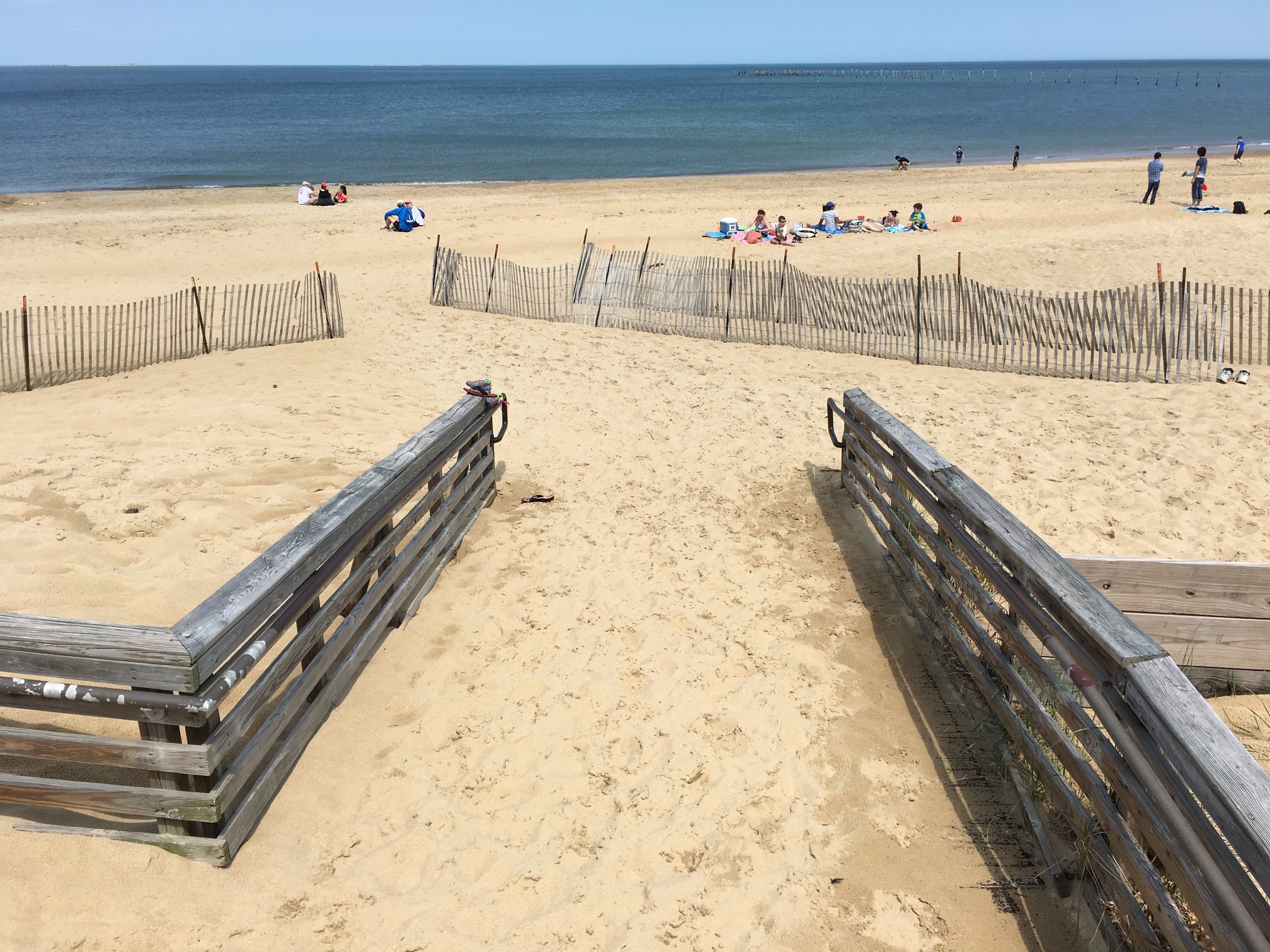 The far north end of the Virginia Company Boardwalk provides a spectacular view of the Chesapeake Bay. According to the Virginia Institute of Marine Science, the Chesapeake covers 4,480 square miles, has a shoreline of 11,684 miles, and holds 15 trillion gallons of brackish water. 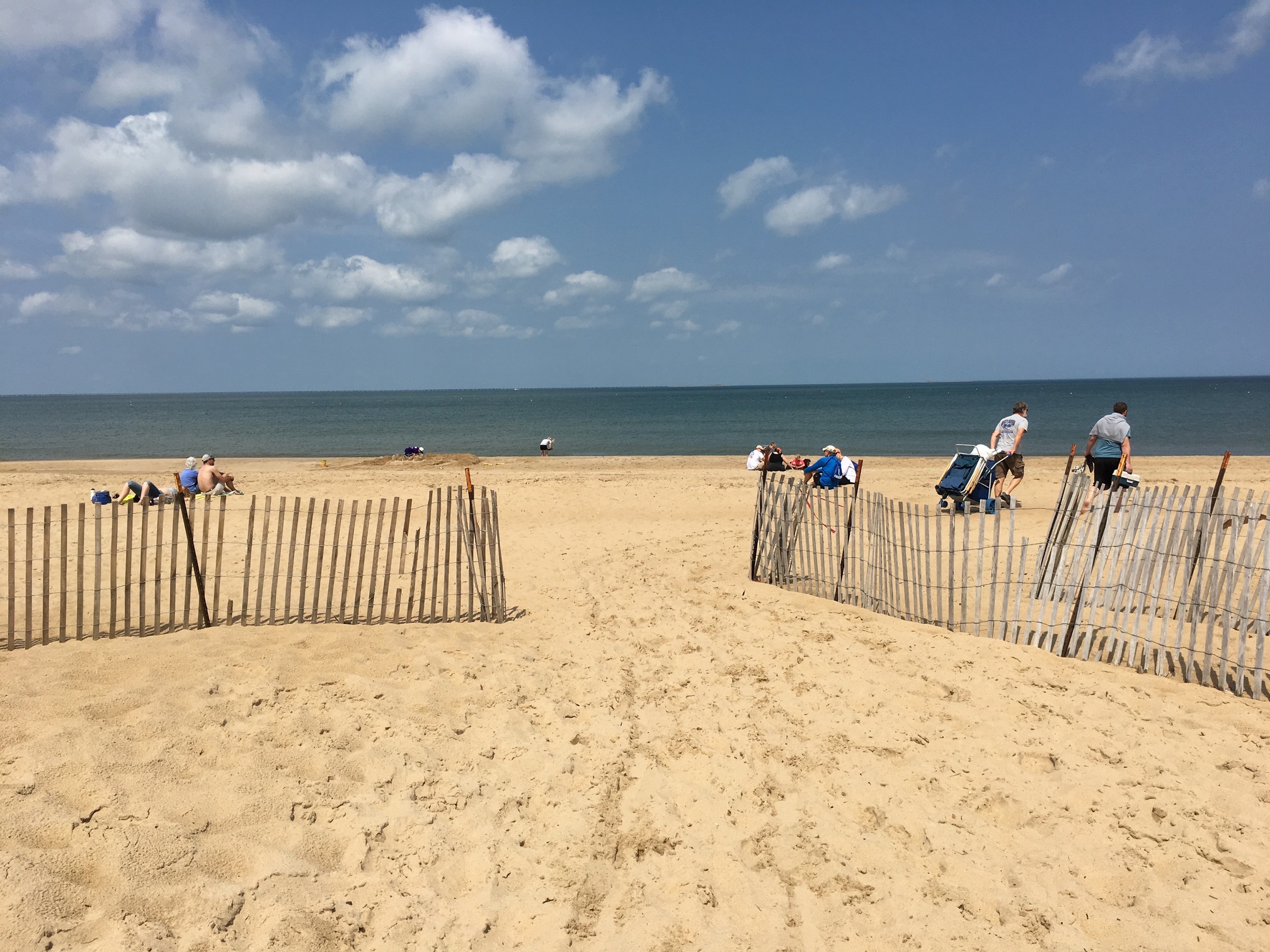 The “Chesapeake” in Chesapeake Bay comes from a 16th century Algonquian word of similar spelling; many Native American tribes spoke Algonquian. While many Old World explorers used Native place names on their maps and the like, they did not write down what the words actually meant. The actual meanings have been lost to history. 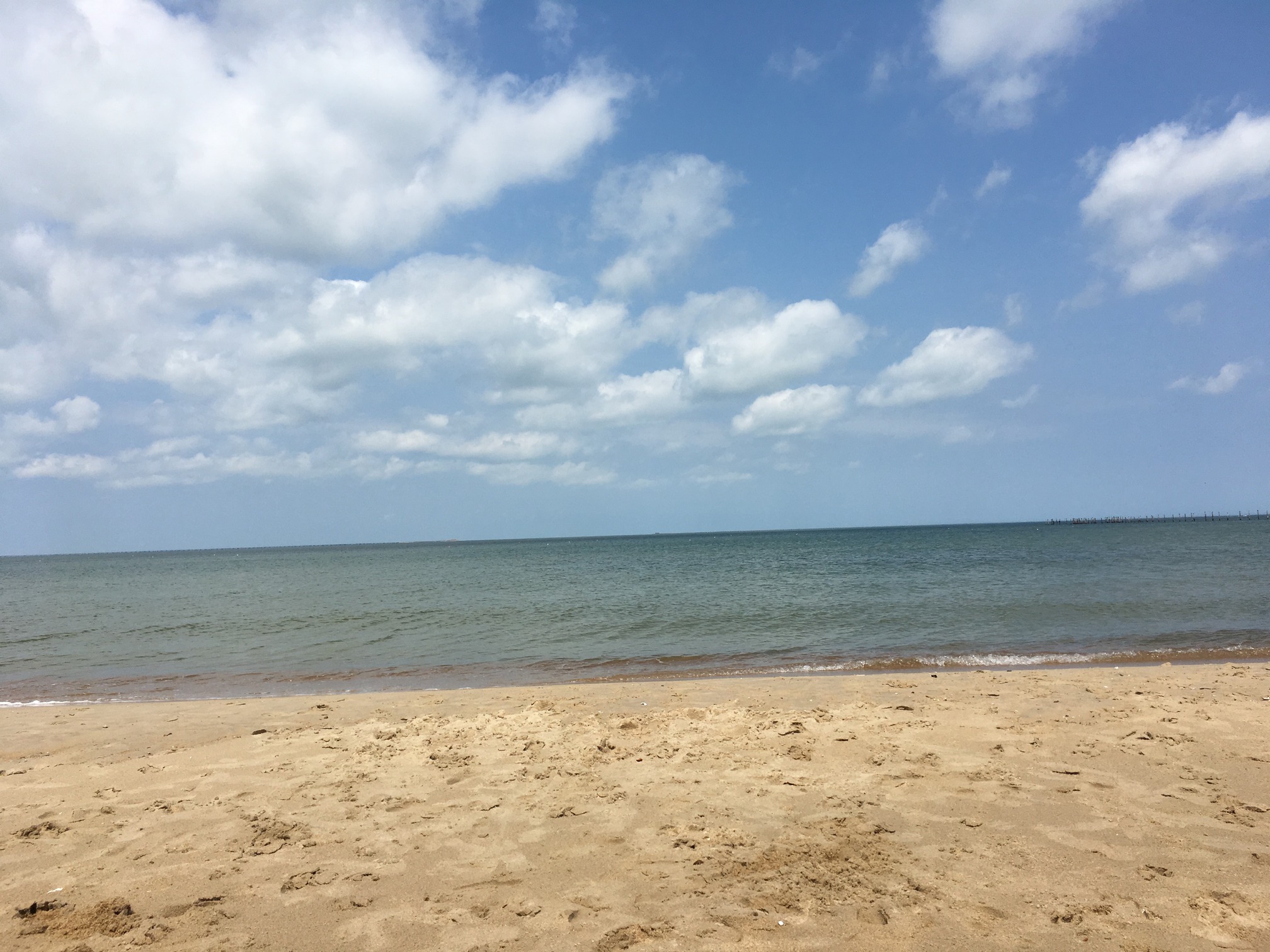 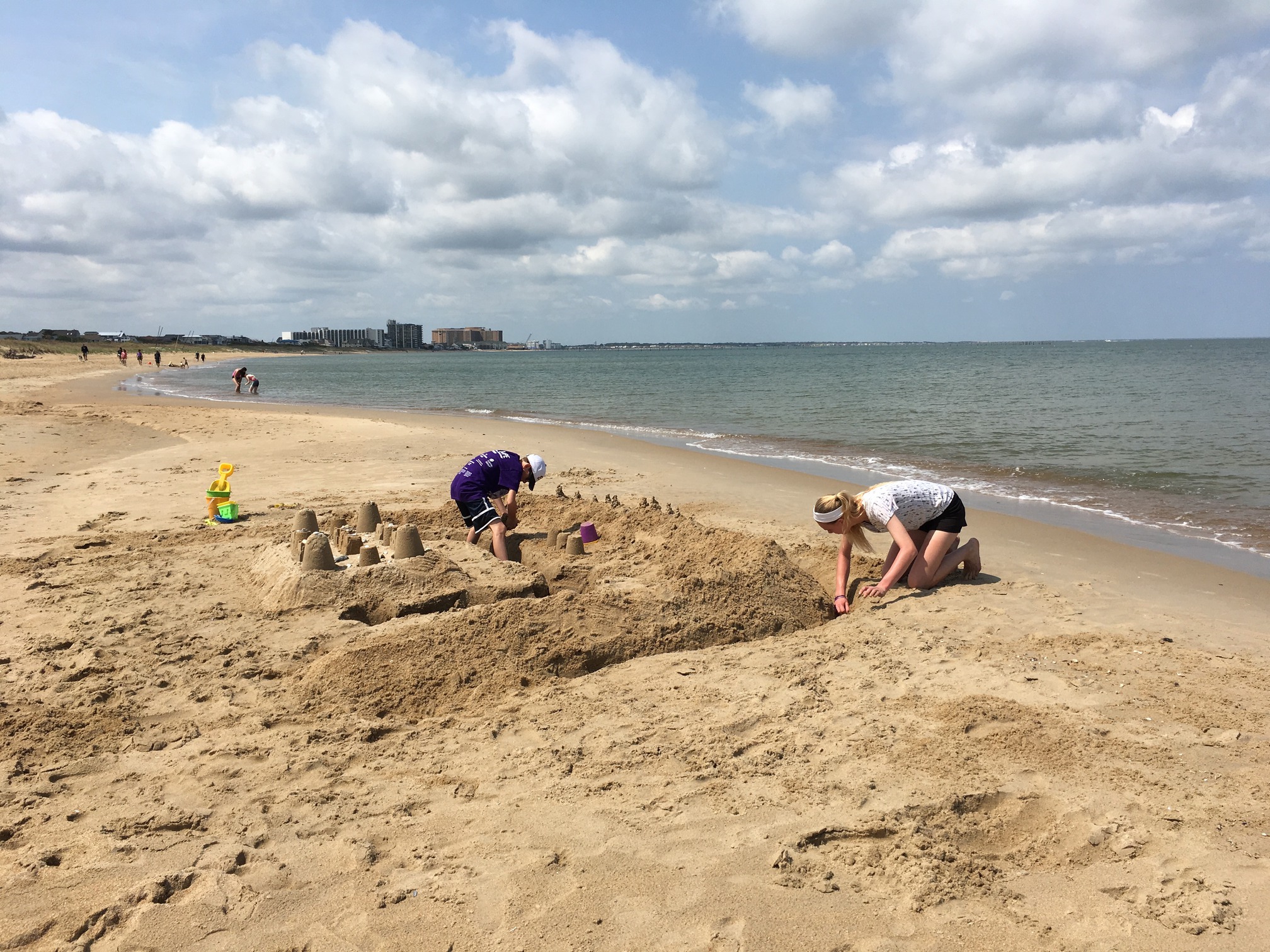 These ambitious castlebuilders took advantage of the low tide to create their masterpiece; their work was the envy of many passersby. This pair of beachgoers incorporated many types of shells into the towers of their sculpture. 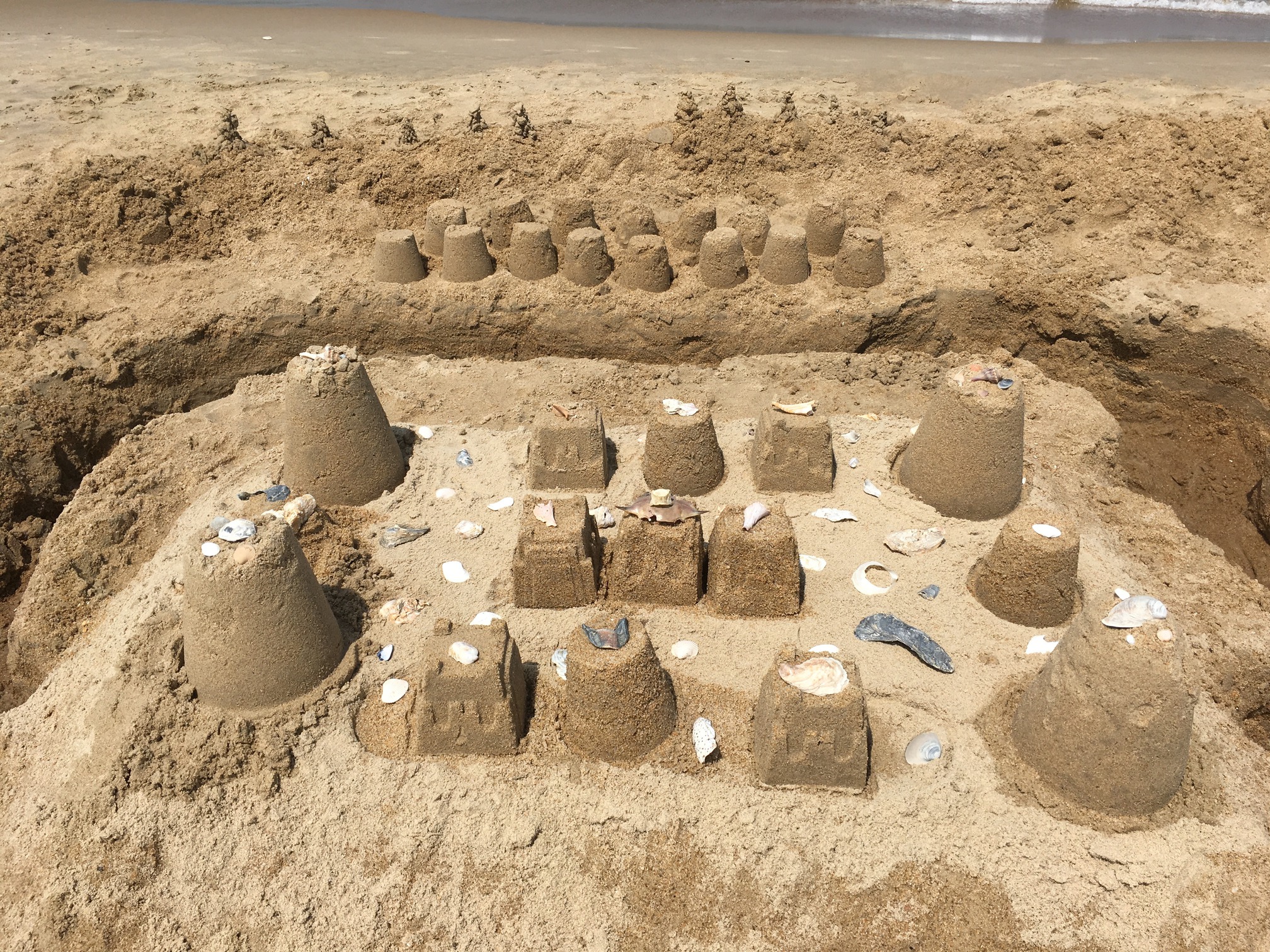 This castle contains the three most common types of shells found in the Chesapeake Bay: bivalve shells and the spirally univalve shells, plus oyster shells. They also used a bluecrab, which is set right in the middle of this image. According to the website for the Chesapeake Bay Program, the Bay is considered healthy at this time due to the increased numbers of adult female bluecrabs and underwater grasses. 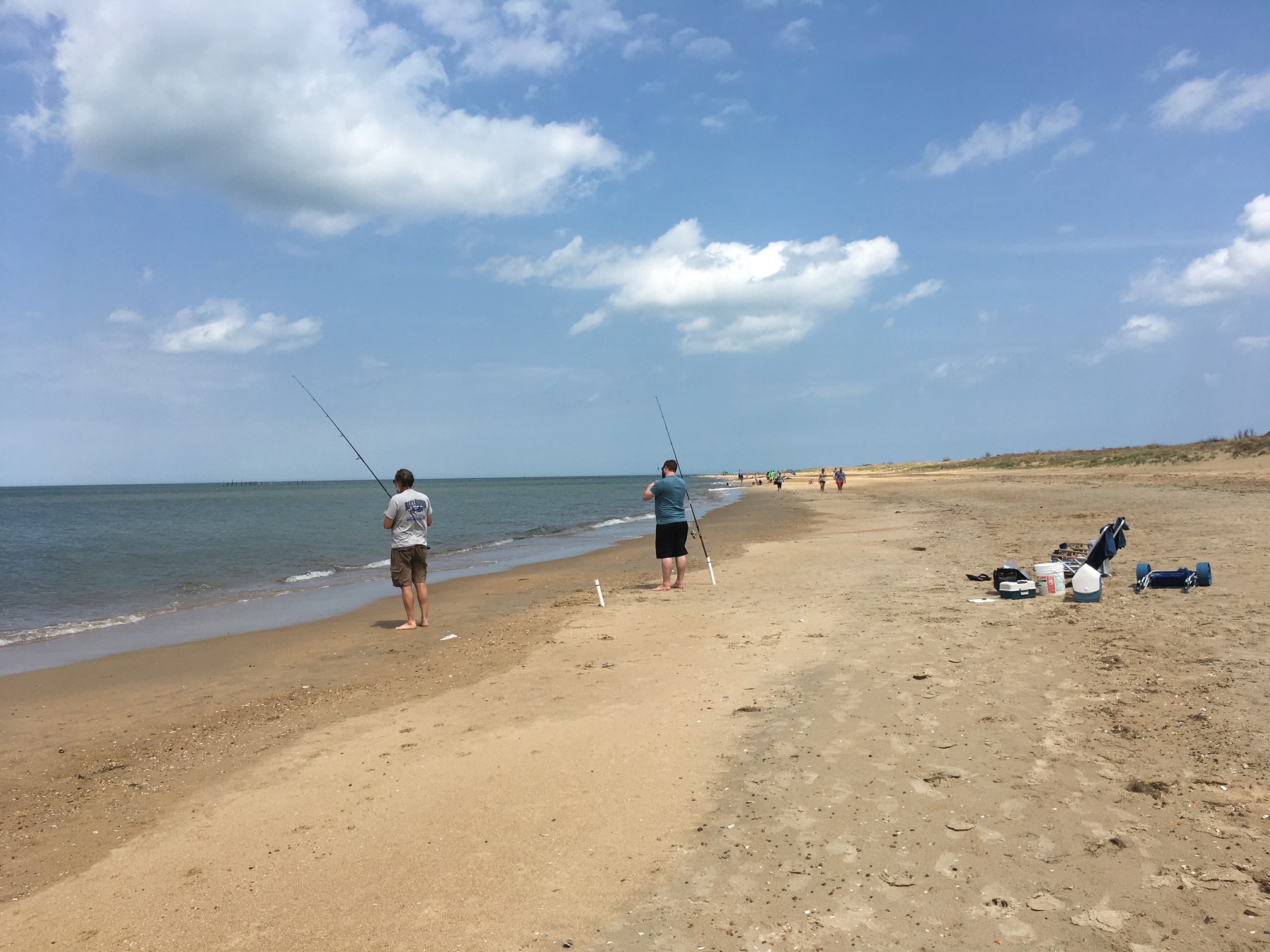 So what’s in the water today? According to chesapeakebay.net, there are more than 350 species of fish in the Bay. These include the alewife, the Atlantic sturgeon, the tiny Bay anchovy, the hogchoker, the lined seahorse, the mummichog, striped bass, tautog, winter flounder, and yellow perch. 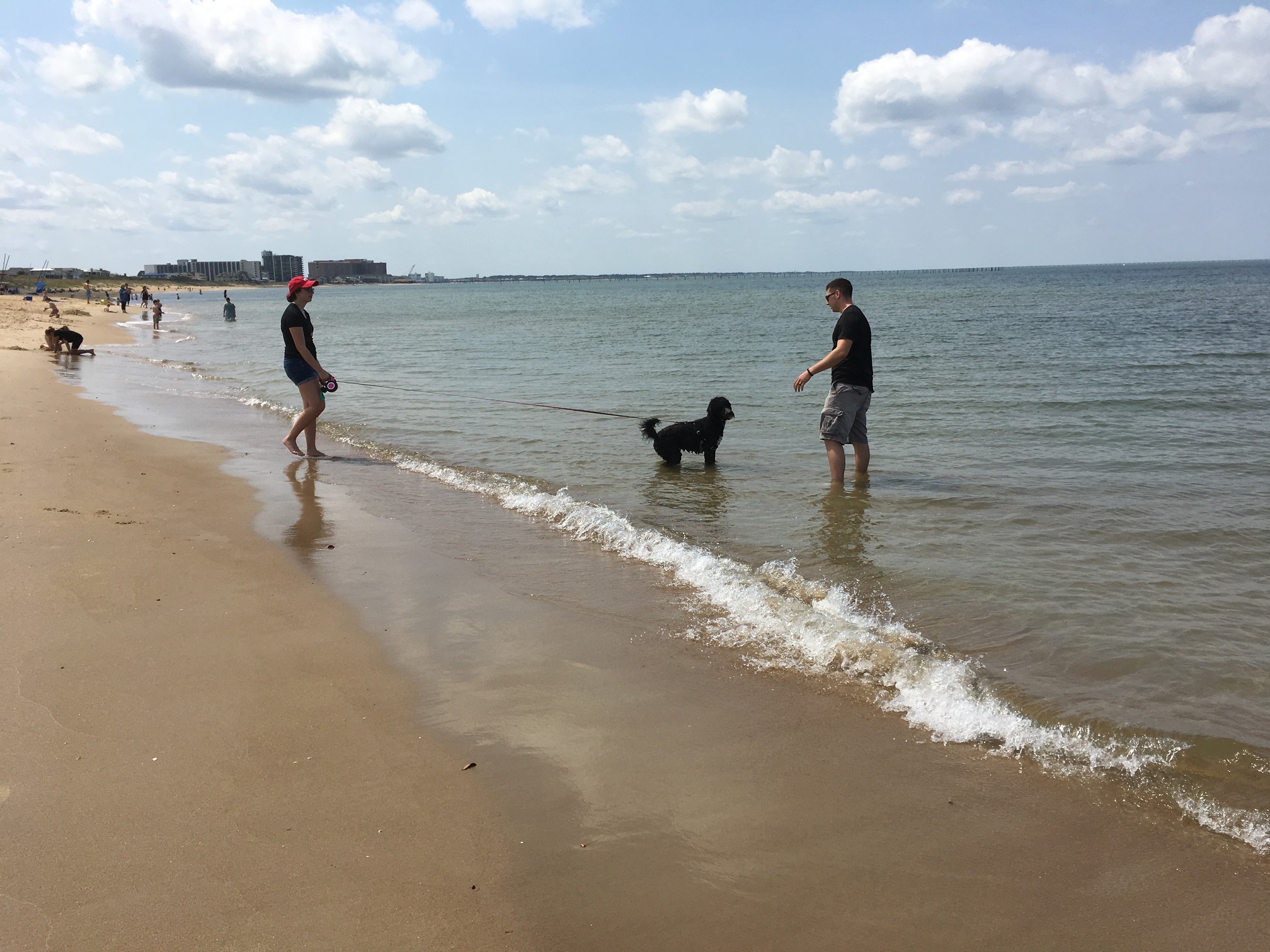 Dogs love this beach as much as people do. The water here in the Chesapeake Bay is noticeably warmer than along the Virginia Beach Boardwalk; the waves are also gentler. The shelling here is very good, as is the likelihood of a chance encounter with a bluecrab or a starfish. 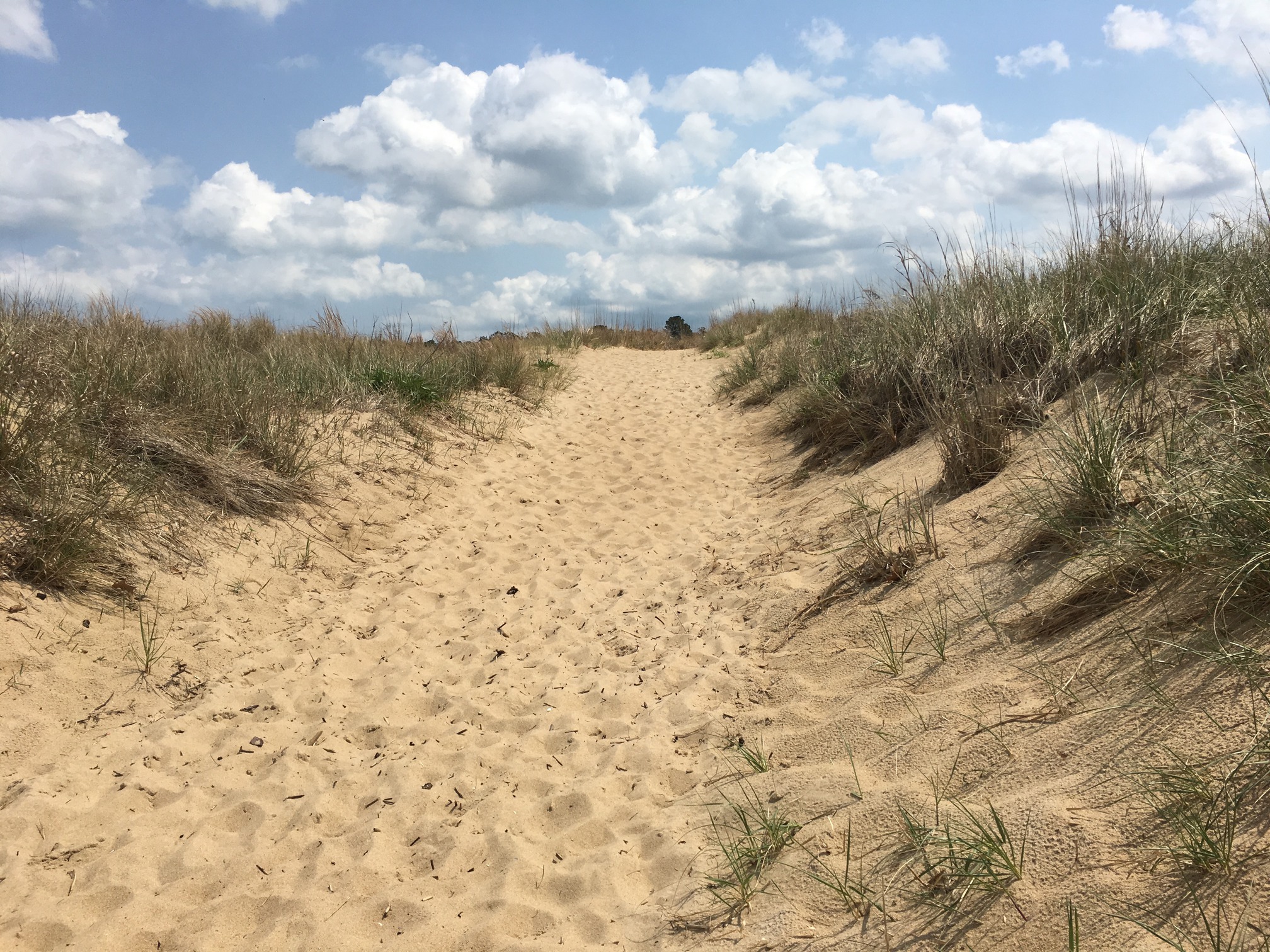 This dune is a fun diversion from the beach, and there is a lot of wildlife here to observe in the grasses, the shrubs, the pine trees and the sky. It’s best not to wander off the trail, as foot traffic can cause erosion of the grasses that hold the sand in place. This path leads straight back to a paved road, which in turn leads to the visitors center. 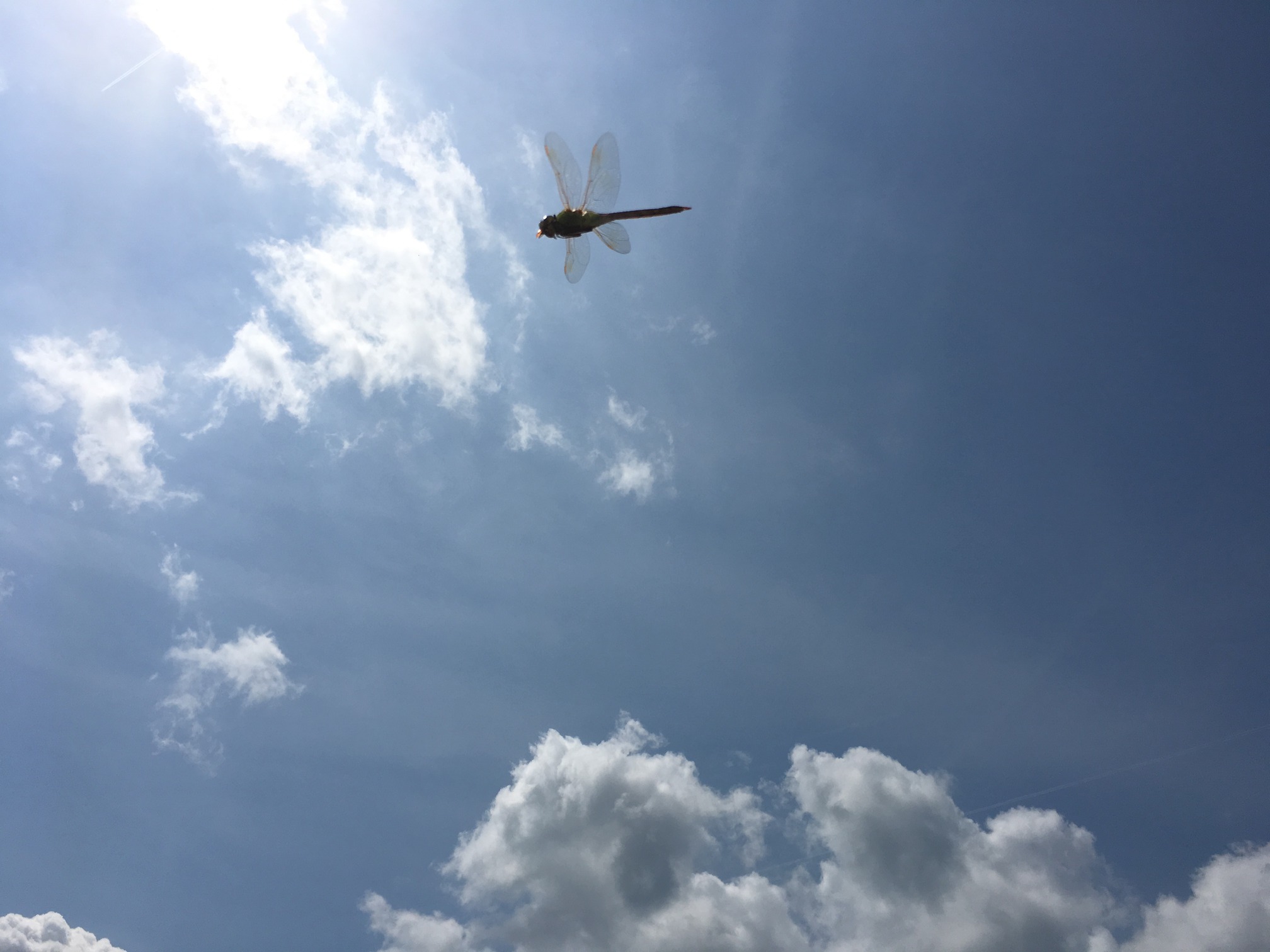 Didn't see any dragonflies at the Virginia Beach Boardwalk, but there were plenty of them, including some enormous ones, buzzing around here at First Landing. They were flying in the water, along the shoreline, above the dunes, and zipping along the grasses and shrubs. This arthropod is harmless and beautiful, but may fly close. Dragonflies begin as nymphs in the water, and live for seven months, feeding off mosquitoes among other insects. 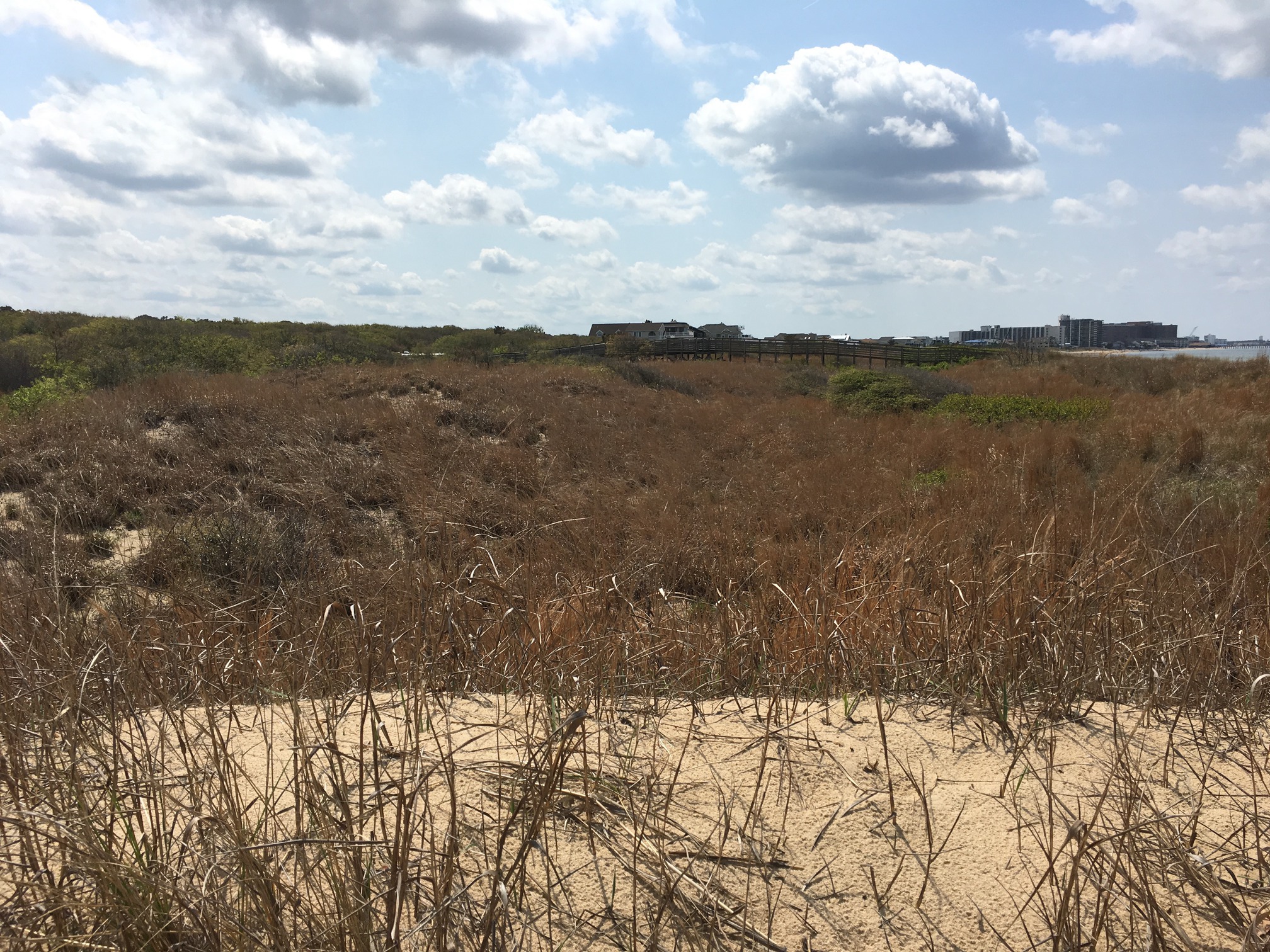 Beyond the dunes, shrubs and trees is the Discovery Boardwalk, and west of that are the farthest camp loop and Kendall Street, which mark the westernmost edge of First Landing State Park. Condos and other beachfront properties stand shoulder to shoulder here, with dozens of shops and eateries. There are a lot of ships, including some ginormous naval vessels, that are easily viewable in the distance. 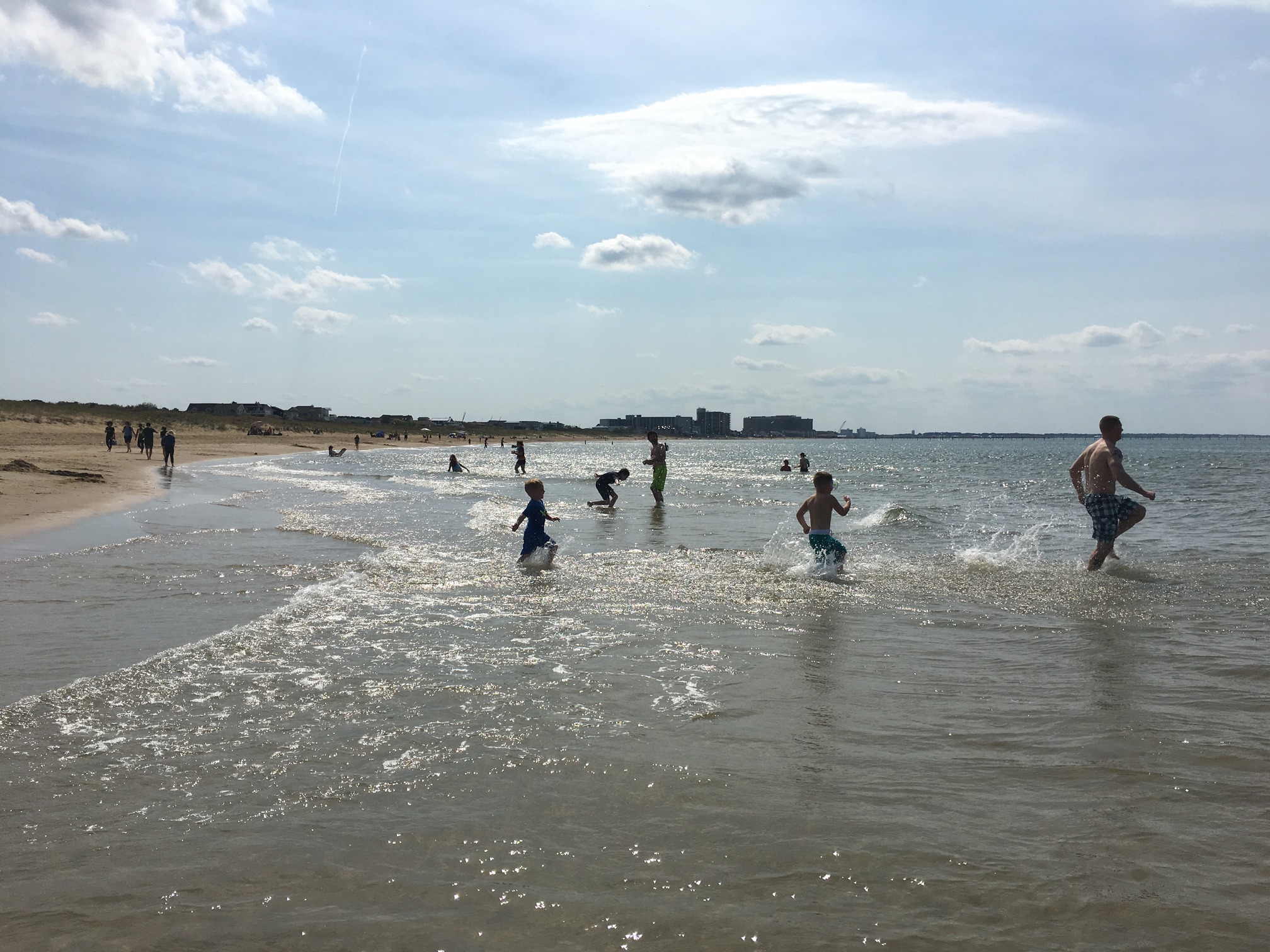 This daddy is leading his two ducklings into the Bay. Alas, there are no lifeguards here, and the beach is not groomed as is the sand at the Virginia Beach Boardwalk. There is a lot of seaweed that washes up, but this beach is closer to nature than the hotel beach. It’s also a lot quieter, and even the fighter jets are fewer and further between. There is very little litter, and the remnants of old docks are fun to look at. 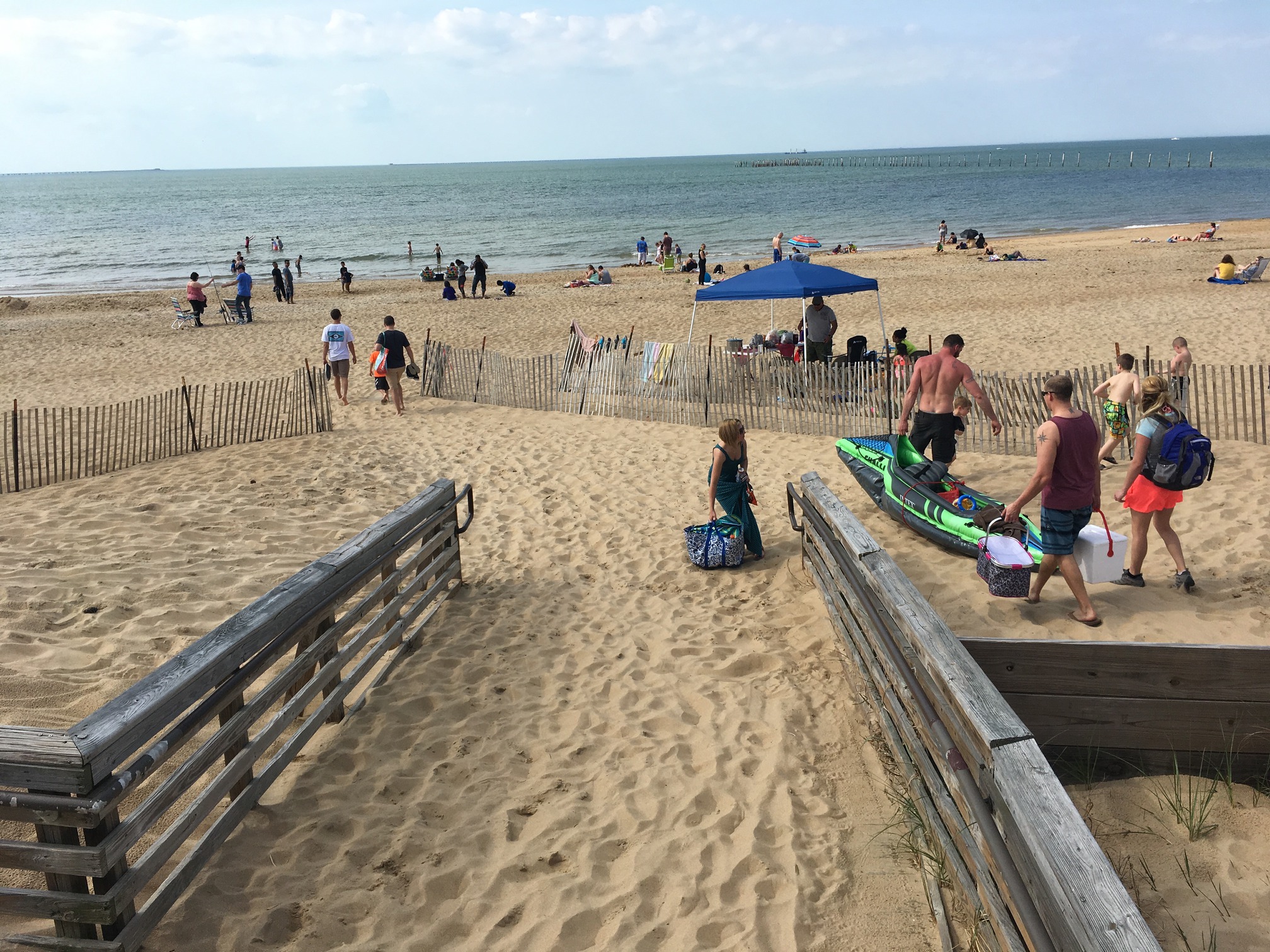 Old remnant pilings are visible at the top right of this photo, taken later in the day as people are both leaving the beach and just coming in. The sun is starting to go down and the air is getting a little cooler, now that it’s after 4 pm. Sunset would come at 7:40 pm. 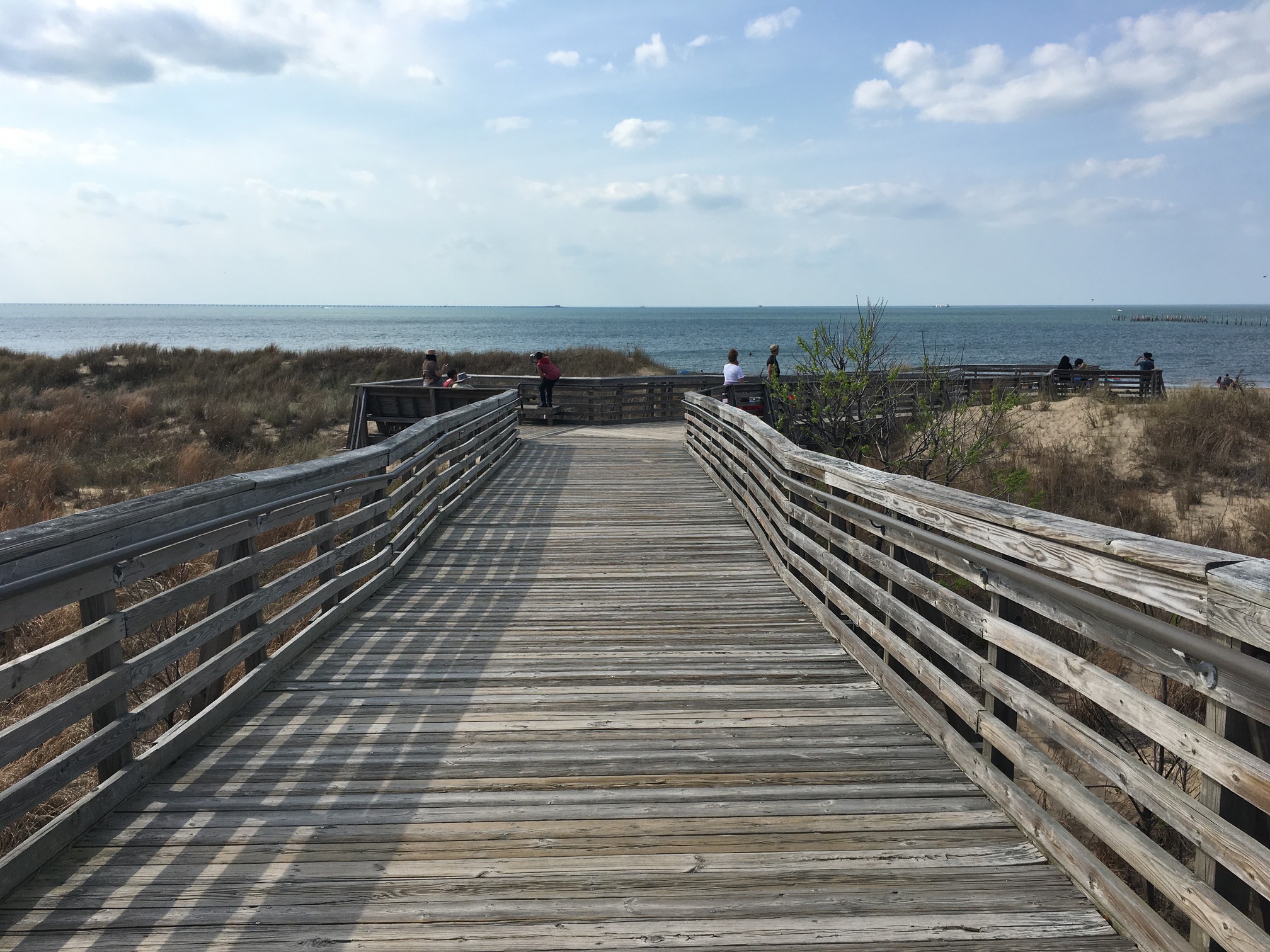 After one last look at the Virginia Company Boardwalk, it’s time to head back toward the visitor center, which closes at 5 pm. Outside the visitor center are a drinking fountain and a footbath, trash receptacles, and to either side are the bathhouses, which have amenities. This is a great place to visit, whether for an afternoon, a day, a weekend, or even a week. The Cape Henry Lighthouse is a short drive east, as are many tourist hotspots to the west past Kendall Street along Shore Drive/Route 60.