The quarter-mile-long Jacksonville Beach Fishing Pier closed for construction in November 2019 and will reopen in early 2022. Hurricanes Matthew and Irma destroyed large swaths of the pier a few years go, but Jacksonville Beach is otherwise open for beach-goers to enjoy. Surfing, shelling, lounging, bicycling, strolling, boogie-boarding, volleyball, and angling are all still here, on both sides of the pier. 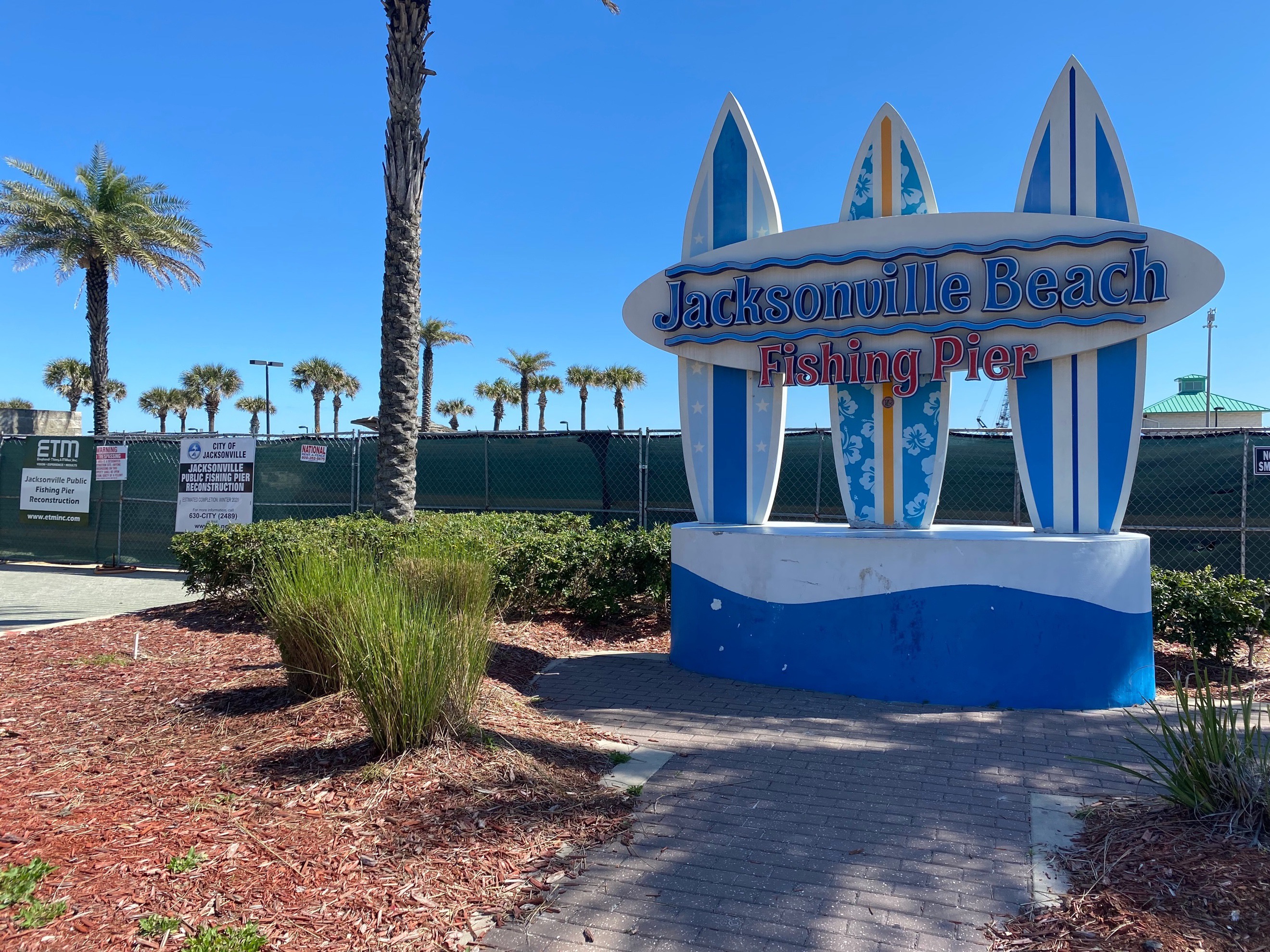 The temporary fencing at the Jacksonville Beach Fishing Pier is the first indicator that this beach isn’t business as usual. As of March 2021, the latest news is that construction will be finished early next spring, after several delays including that of federal wildlife permitting. While this pier is in Jacksonville Beach, the City of Jacksonville owns it, and with funding for the re-construction coming from the city, the Federal Emergency Management Agency (FEMA) and insurance. The new pier, which will be eight feet higher at the end than previously, will cost $8 million.

In 2016 and 2017 respectlvely, Hurricanes Matthew and Irma wiped away the easternmost 300 feet of the Jacksonville Beach Fishing Pier. This is why the pier parking lot is closed off with construction fencing, and a few of the nearby restaurants are too. This lot, once filled with land-yachts of all makes, are now filled with construction workers’ pickup trucks. The Pier, a Jacksonville Beach eatery, is closed and the doors to the porch around back are padlocked. The Wreck Tiki Bar & Lounge is also closed. 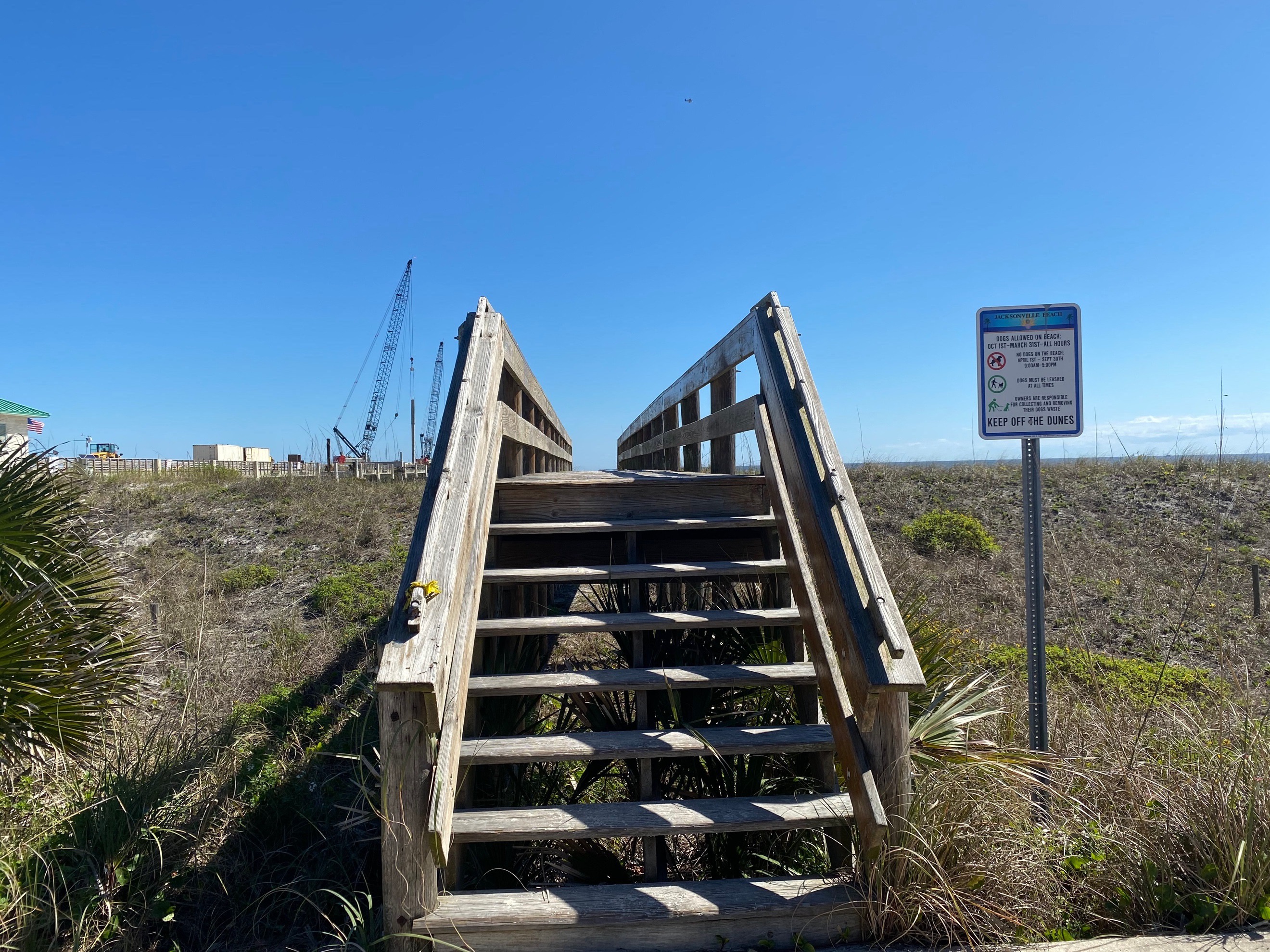 Although it is very important to stay away from construction sites, especially this one with a 200-ton crane, this access point is still open and is a great place to view the on-going construction safely from a distance. This access point will take beach on-lookers close to the area near where the pier’s bait shop used to be. There is still some discussion about whether there will still be a bait shop when the pier re-opens. 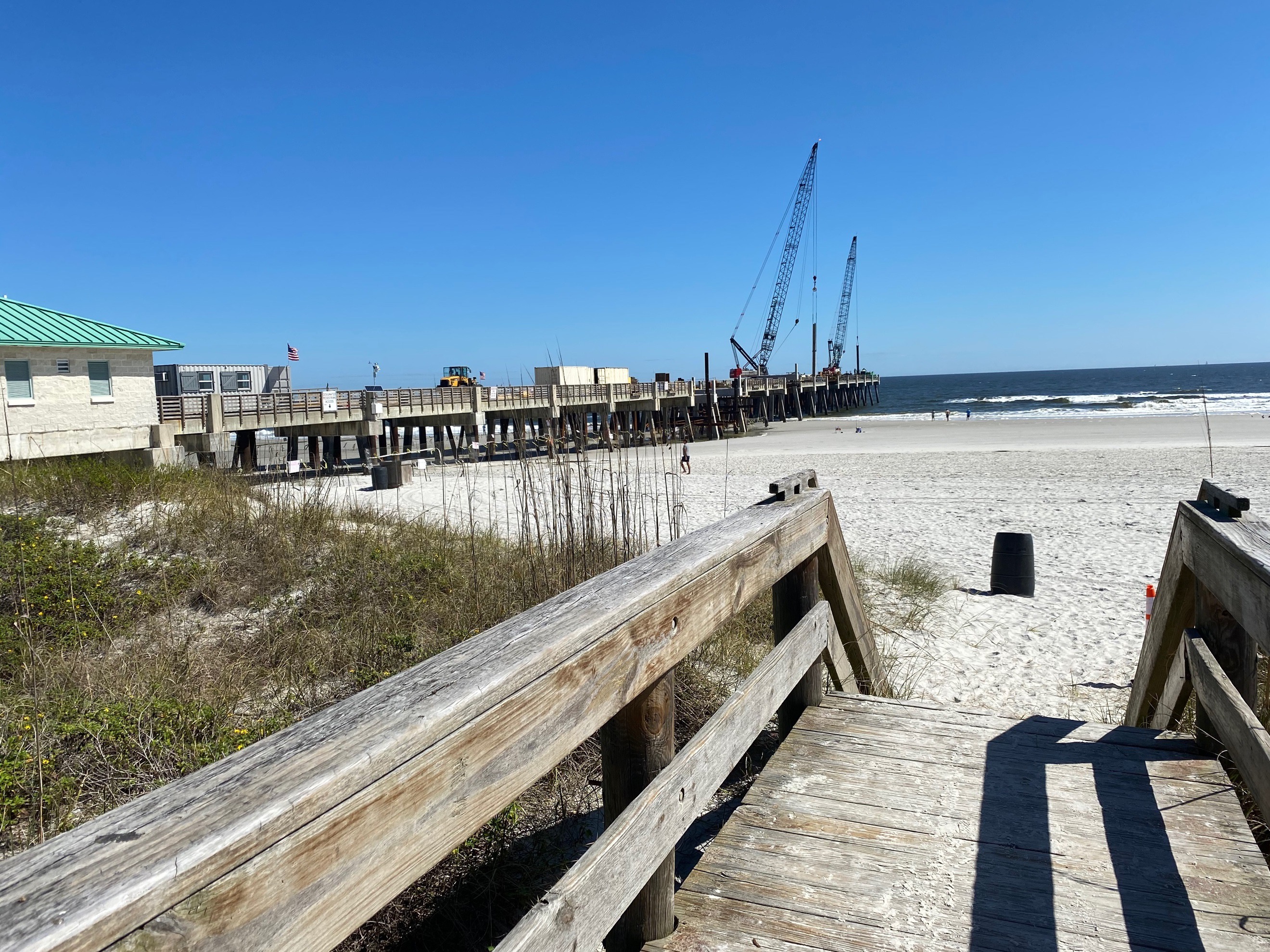 Just the first 600 feet of the Jacksonville Beach Pier were open in March 2018, with countless pier-strollers and anglers coming up to the back fence to peer at the closed-off section. Now, the entirety of it is closed, with a second, parallel pier under construction that is strong enough to hold the massive cranes and supply tonnage to support the hardening of the Pier to withstand a fifty-year storm. 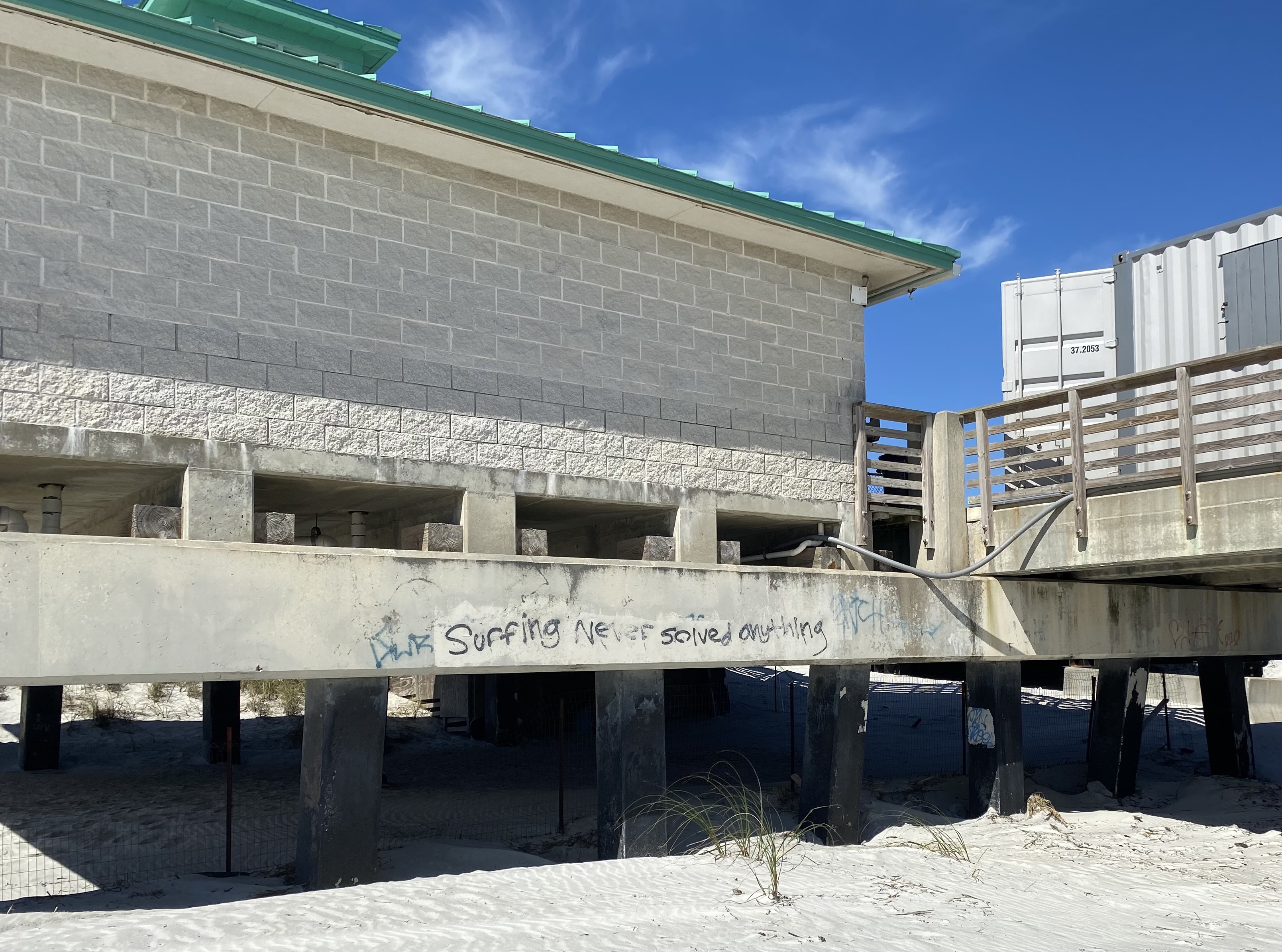 Surfing Never Solved Anything . . . well, not true. Even though it’s only 65 degrees F (18 C) there are surfers out today, though far away from the pier. There are surf shops just a block away, with people going in and out all day, laden with shopping totes. This image was taken on March 10th, 2021, at quarter after eleven in the morning. The temperatures would finally reach the low 70’s at week's end, with surfers in full body wetsuits riding the waves. 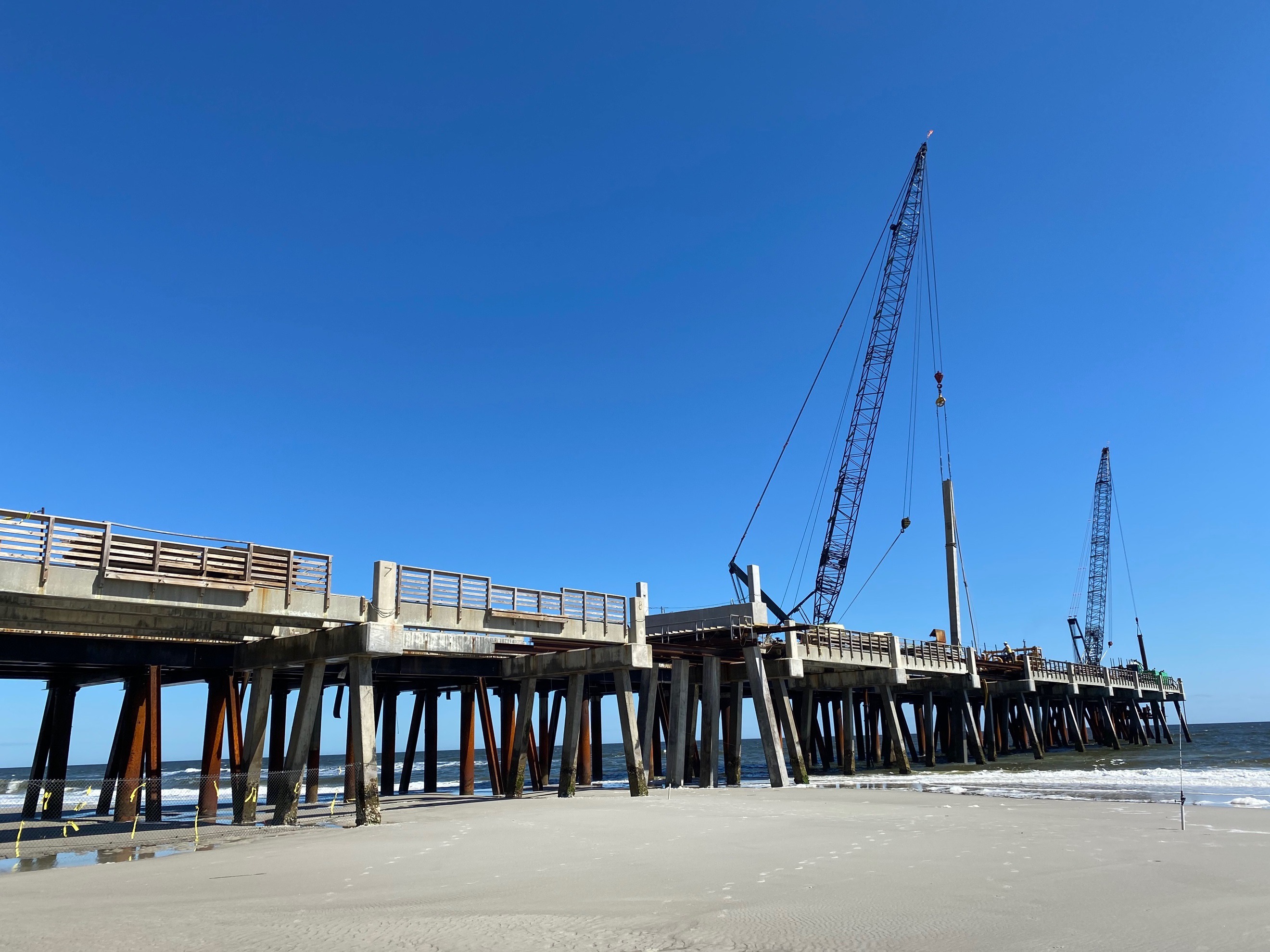 These cranes reach so far into the sky that they have lightning rods, and of course, an American flag at the top. The largest crane at 200 tons was bought by the contractor just for this project. Looking closely at the pier, close observers can see a second steel pier behind the pier proper, which is still being built out so that the equipment can move east to west and back again to rebuild this attraction. 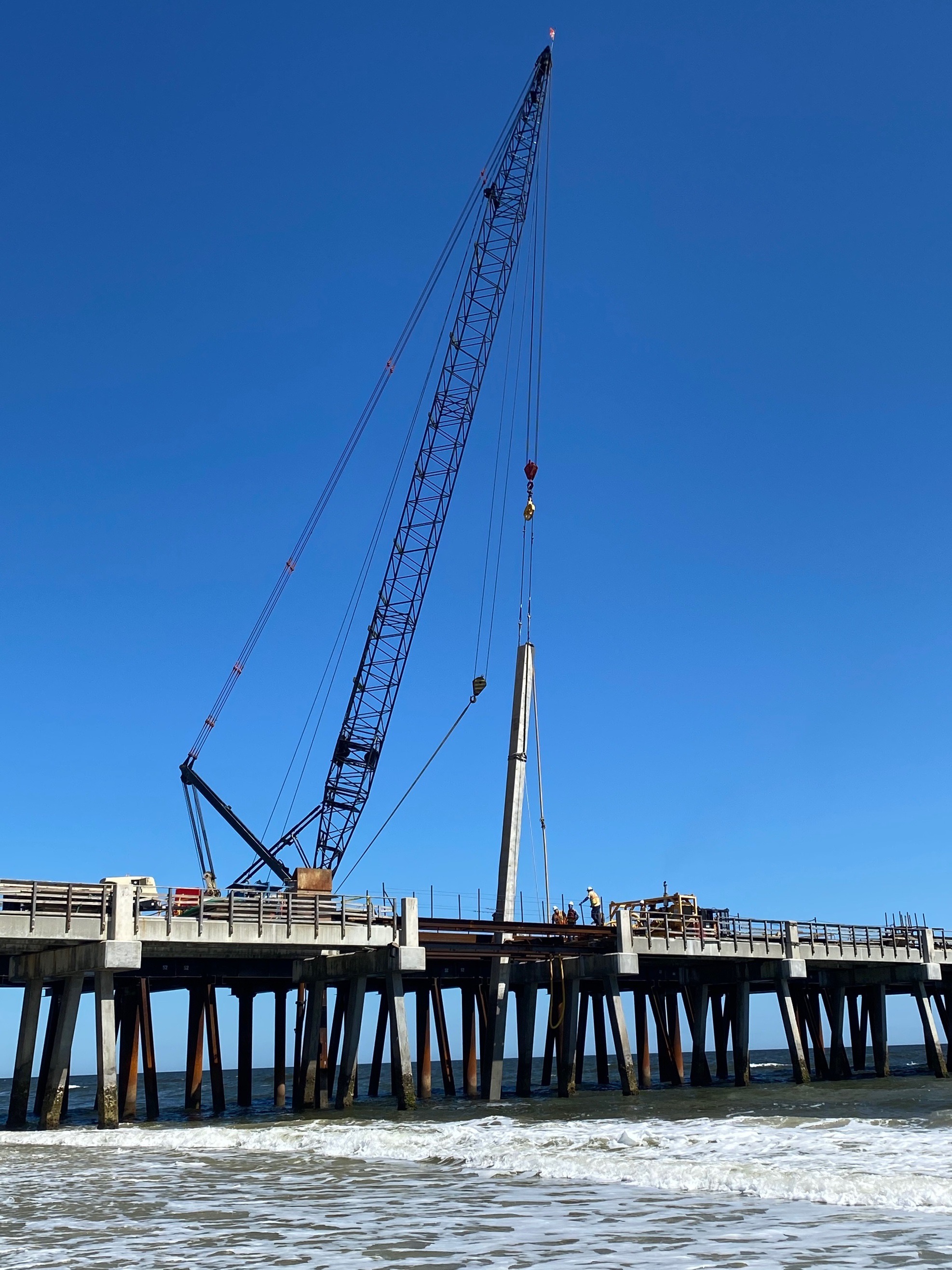 Is this piling going in or coming out? Regardless  of the answer, the new piling for the Jax Beach Pier will be driven in sixty to eighty feet. Only 320 feet of the original pier, built in 1999, will remain and the next 520 feet will be taken out. Some 400 feet of the pier is currently under water and will be removed by using the cranes. The spans of the pier will have more reinforcement than is currently there. 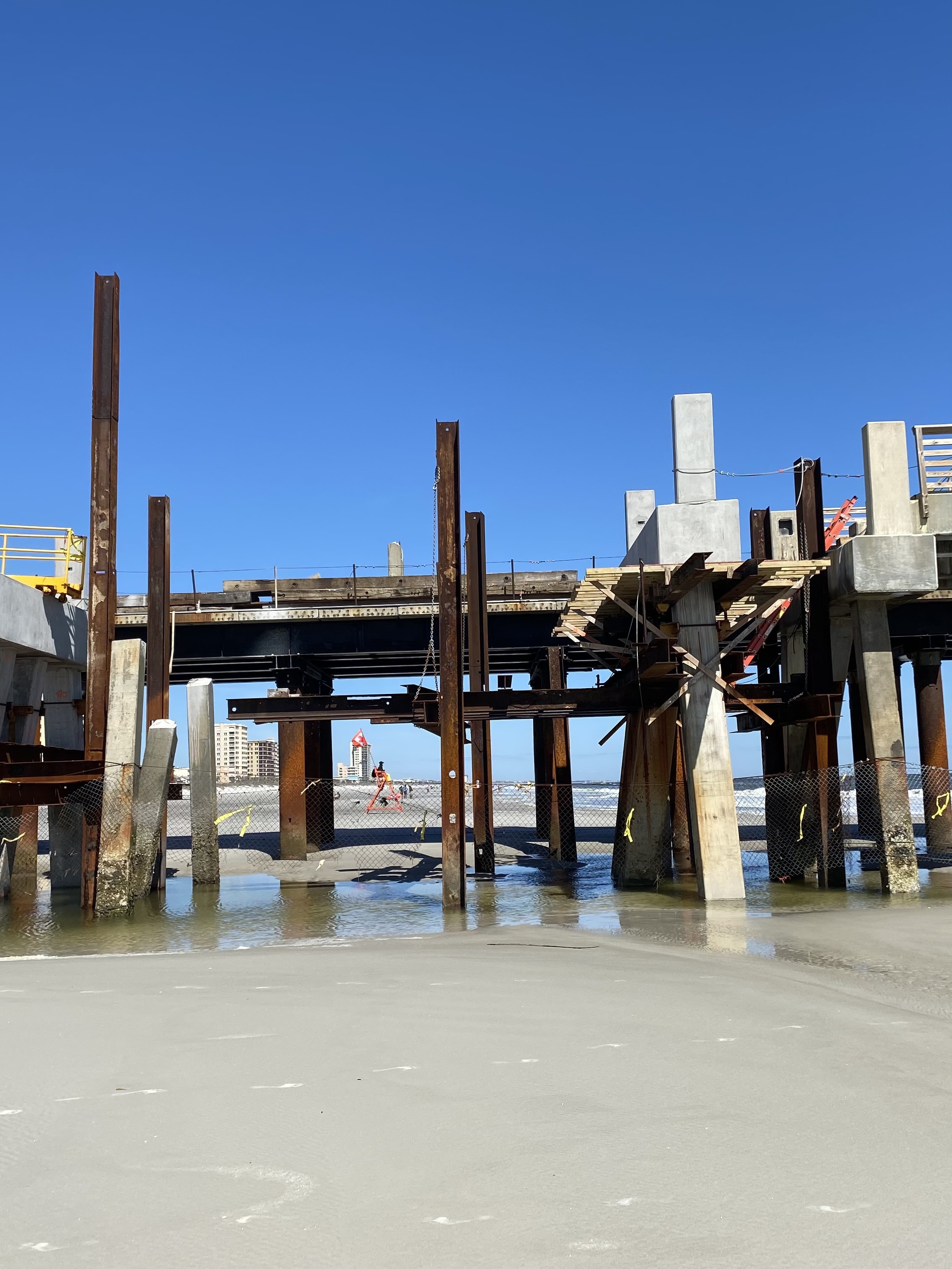 Part of the Jax Beach Pier was washed away during Hurricane Matthew in 2016, with the Category 2 hurricane reaching Jacksonville on October 7th. The pier was built to weather a 20-year storm, but Matthew was said to be a 25-year storm, and project engineers believe that had the pier been eight feet higher, the pier would have survived the surge. The pier will have additional, thicker pilings for reinforcement. 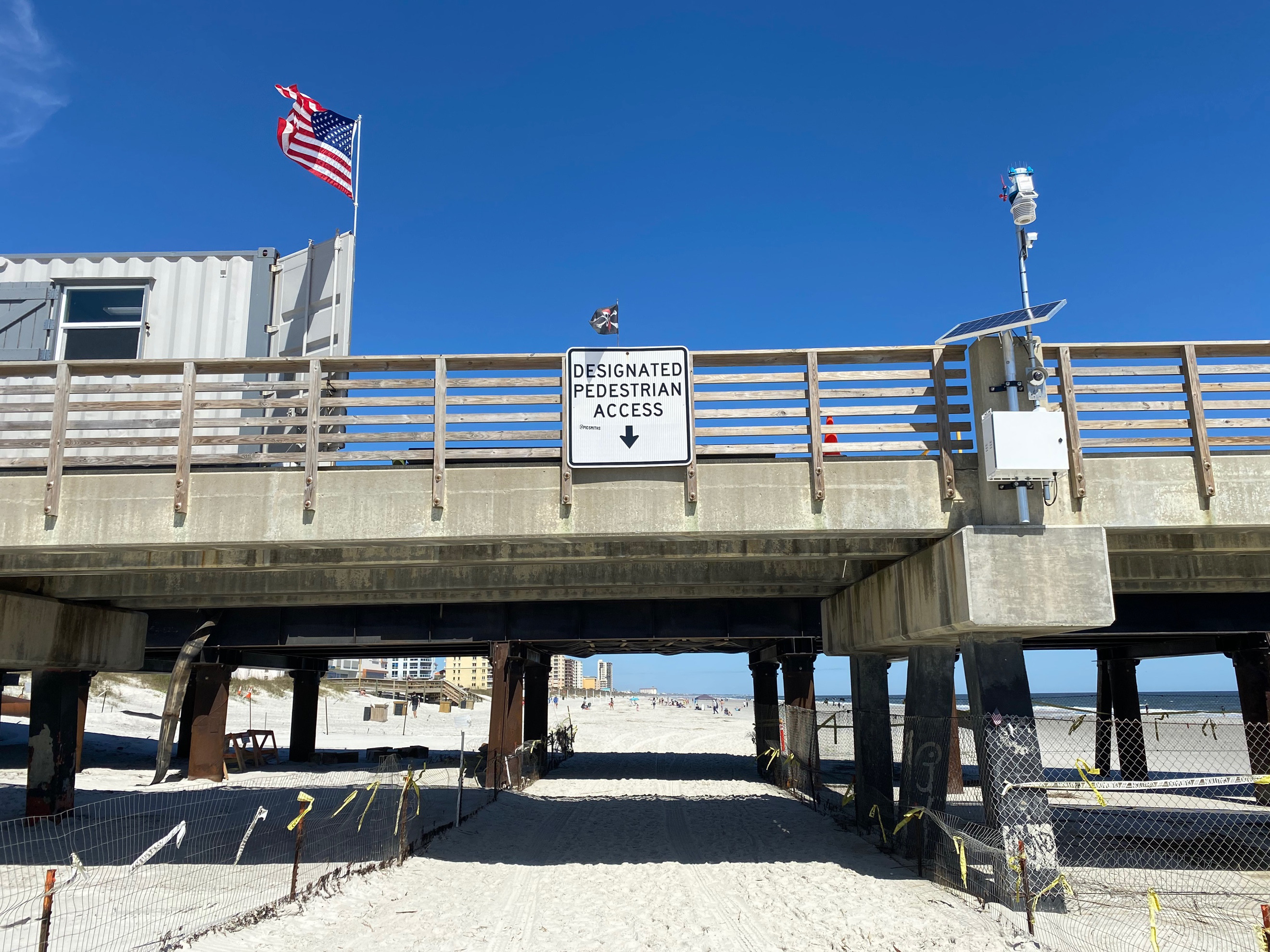 Though beach-goers are cautioned to stay away from the pier, beach-patrol traffic as well as foot traffic is allowed to go through the tunnel just past the boardwalk access point. (Note the Pirate Flag atop the wooden railing. Arrrgh.) Though pedestrians should most definitely not linger beneath the pier, it is an interesting stroll under the construction work. There is graffiti here from seasons past, though most of it is beyond the construction fence. Beach-goers need to remember this is a hard-hat area. 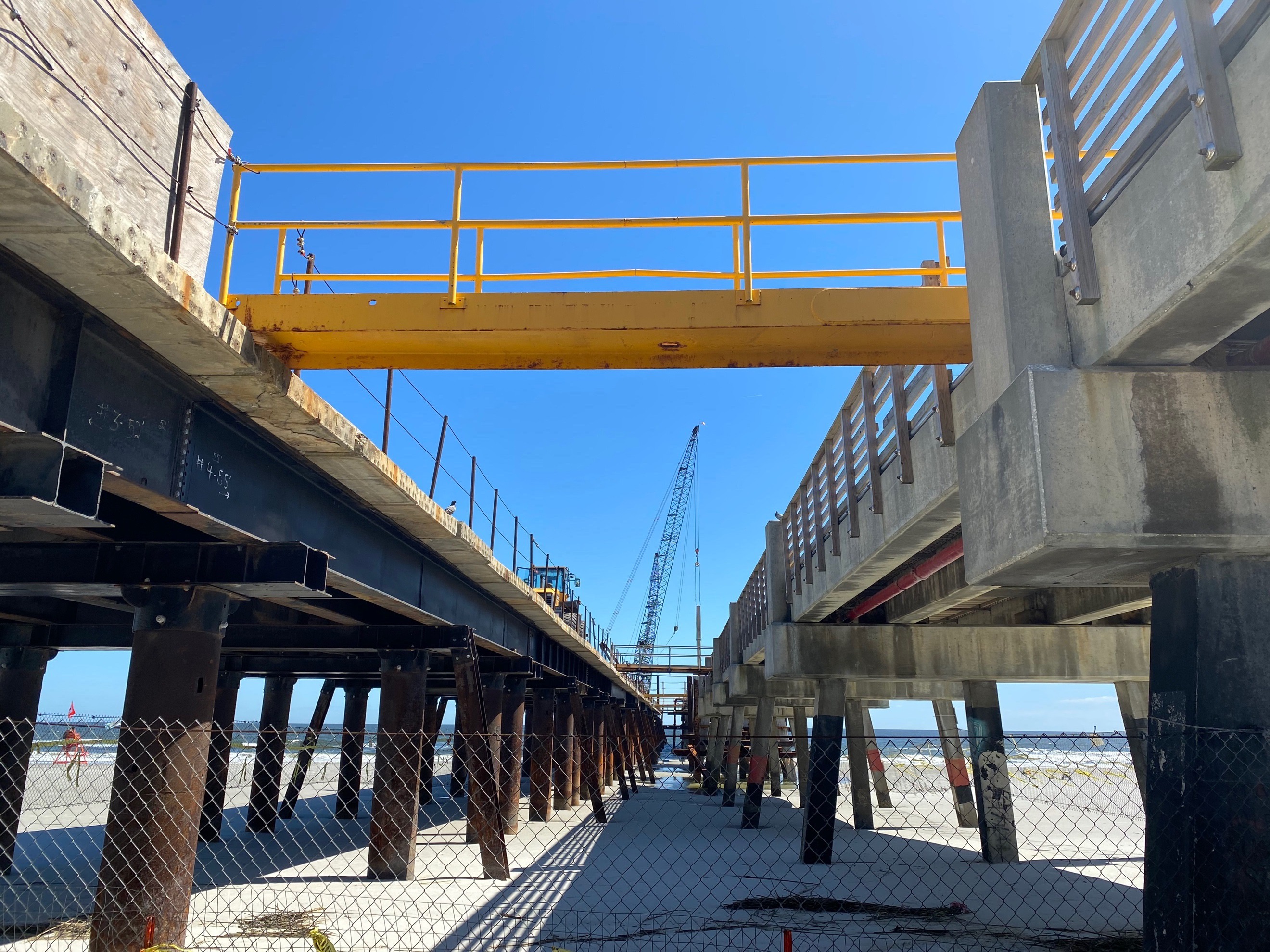 The steel pier to the left, also known as the north pier, is currently being purpose-built to hold the equipment to rebuild the Jax Beach Pier. Construction workers move across these elevated walkways as they position and re-position their supplies. This day was a busy day as both cranes were moving pilings, either driving them in or shaking them loose to be recycled into road fill. 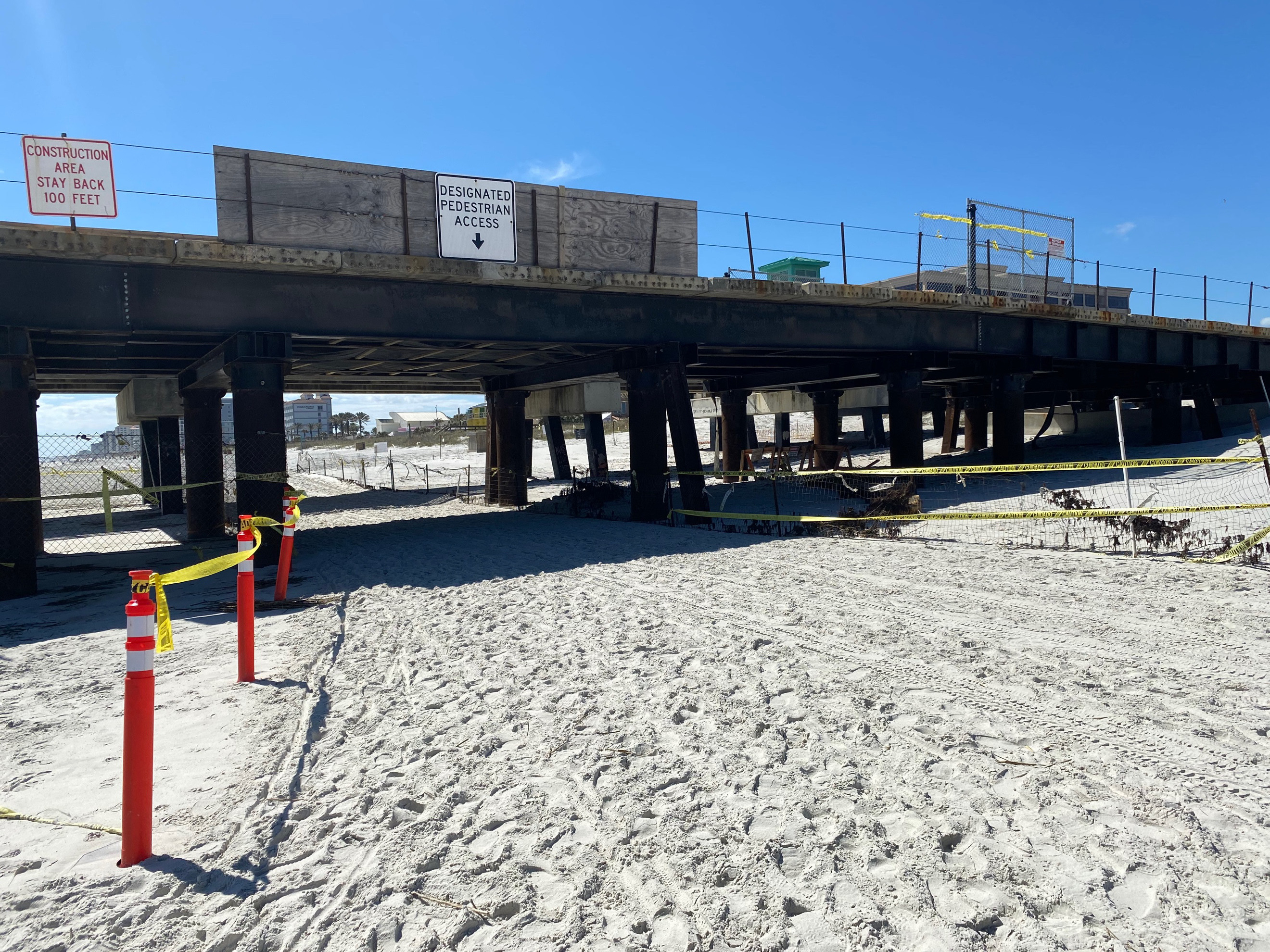 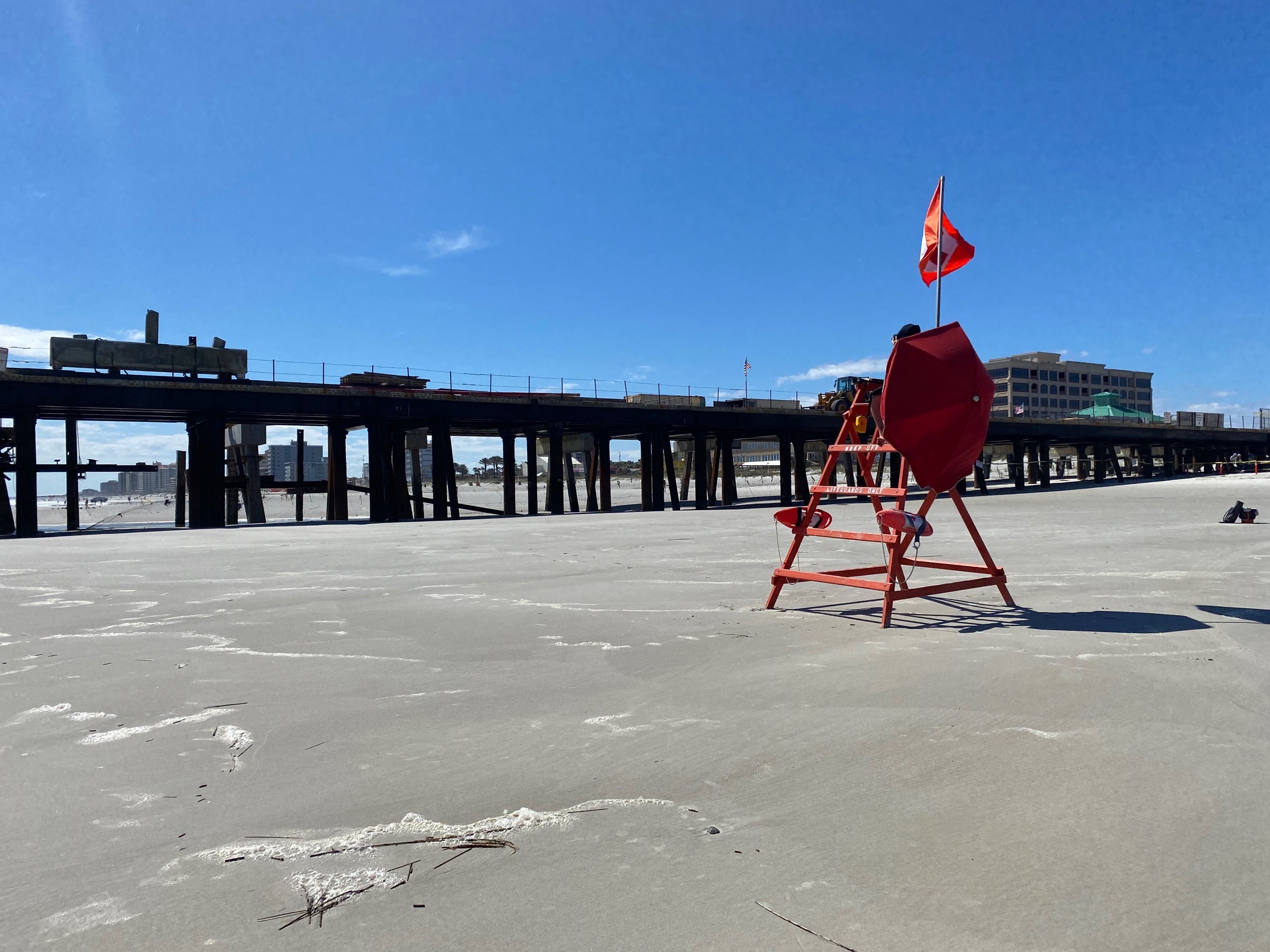 Although there were no lifeguards present on the south side of the pier, there was lifeguard presence on the construction side. The tide was really low at this point, 11:30 am, and the wind was gusty. Beach Patrol pickup trucks were active on both sides of the Pier. Law enforcement officers rode around in little Polaris vehicles, likewise on both sides of the Pier. Beach Patrol has posted red flags near the pier to warn swimmers away from the rough surf. 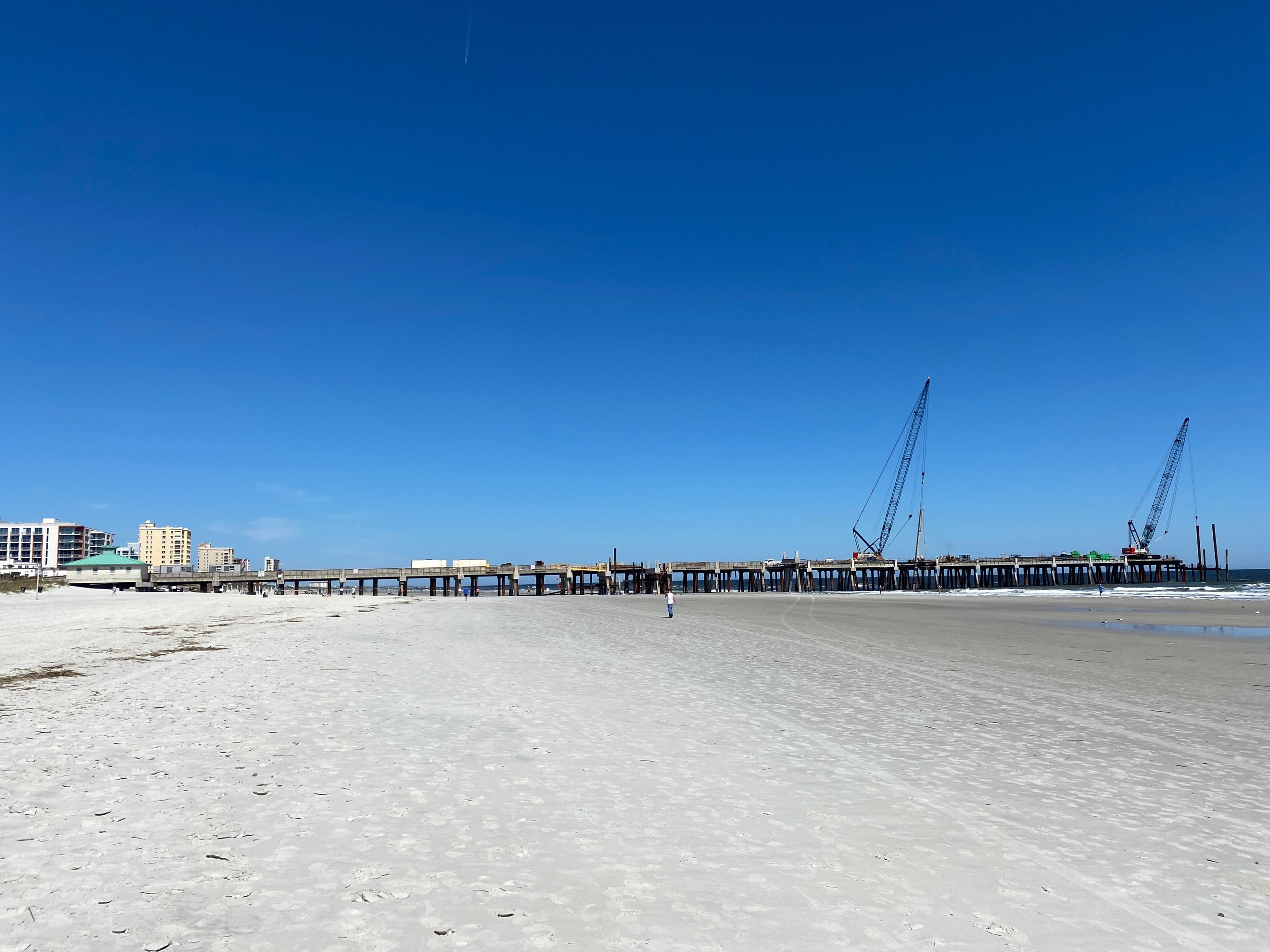 This is the view back on the south side of the pier, non-construction side, looking north. On the far left of the image is where the bait shop was, and may be again, plus the washrooms. On the far right of the Pier, a crane is installing temporary pilings for the construction of the new far end. The newly-reconstructed Pier will be the same length as it was previously at 1300 feet. 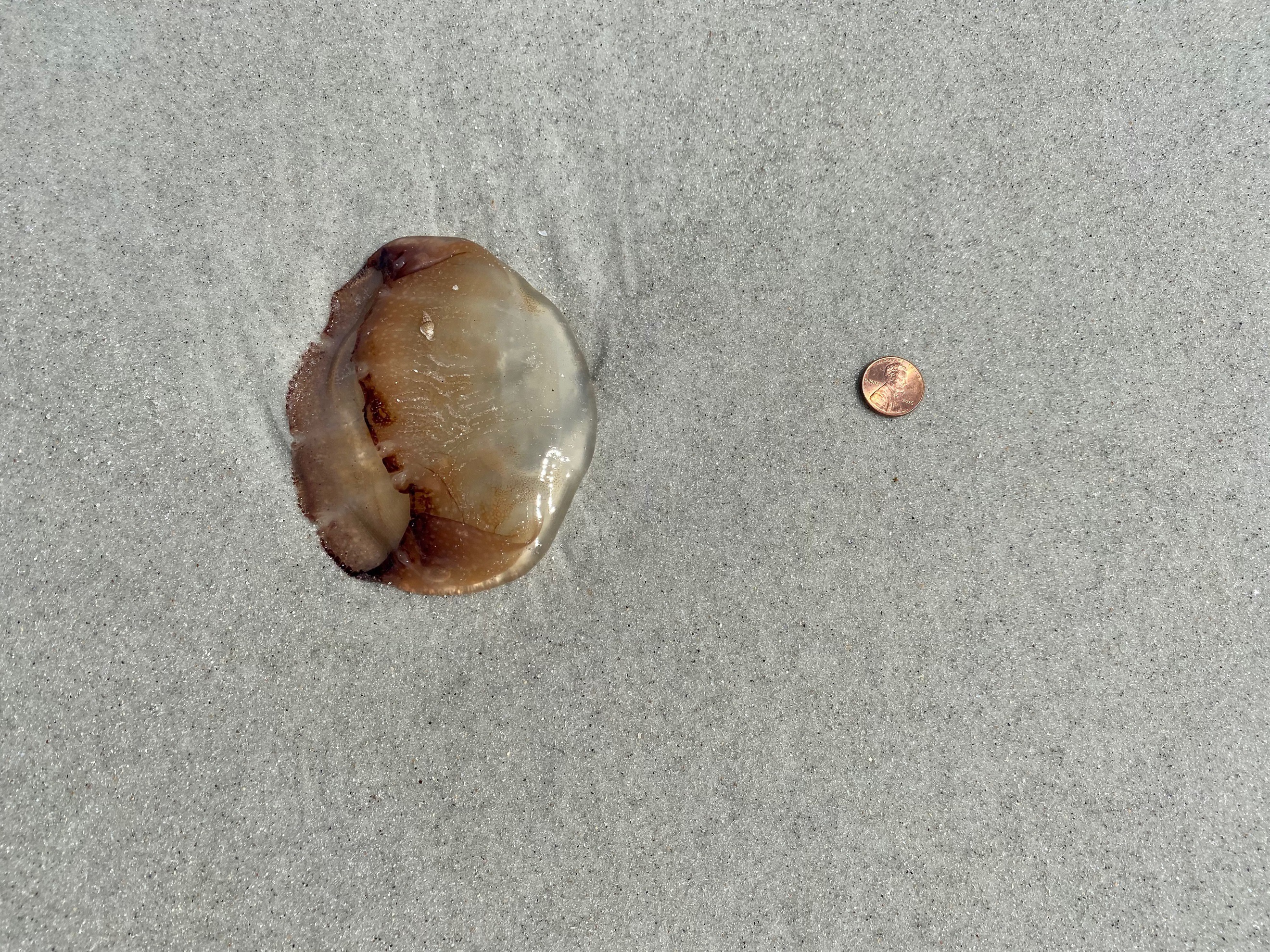 Today is March 10th, and jellyfish might start washing ashore this time of year. They come ashore in the huge waves, and as they are made of mostly water, quickly die if stranded in the sand. Even if dead, the jellyfish may still sting. These creatures have venom in their tentacles, but will not seek out humans. If stung, according to the Mayo Clinic, remove the slender tentacles with tweezers, and immerse the affected area in hot but not scalding water. 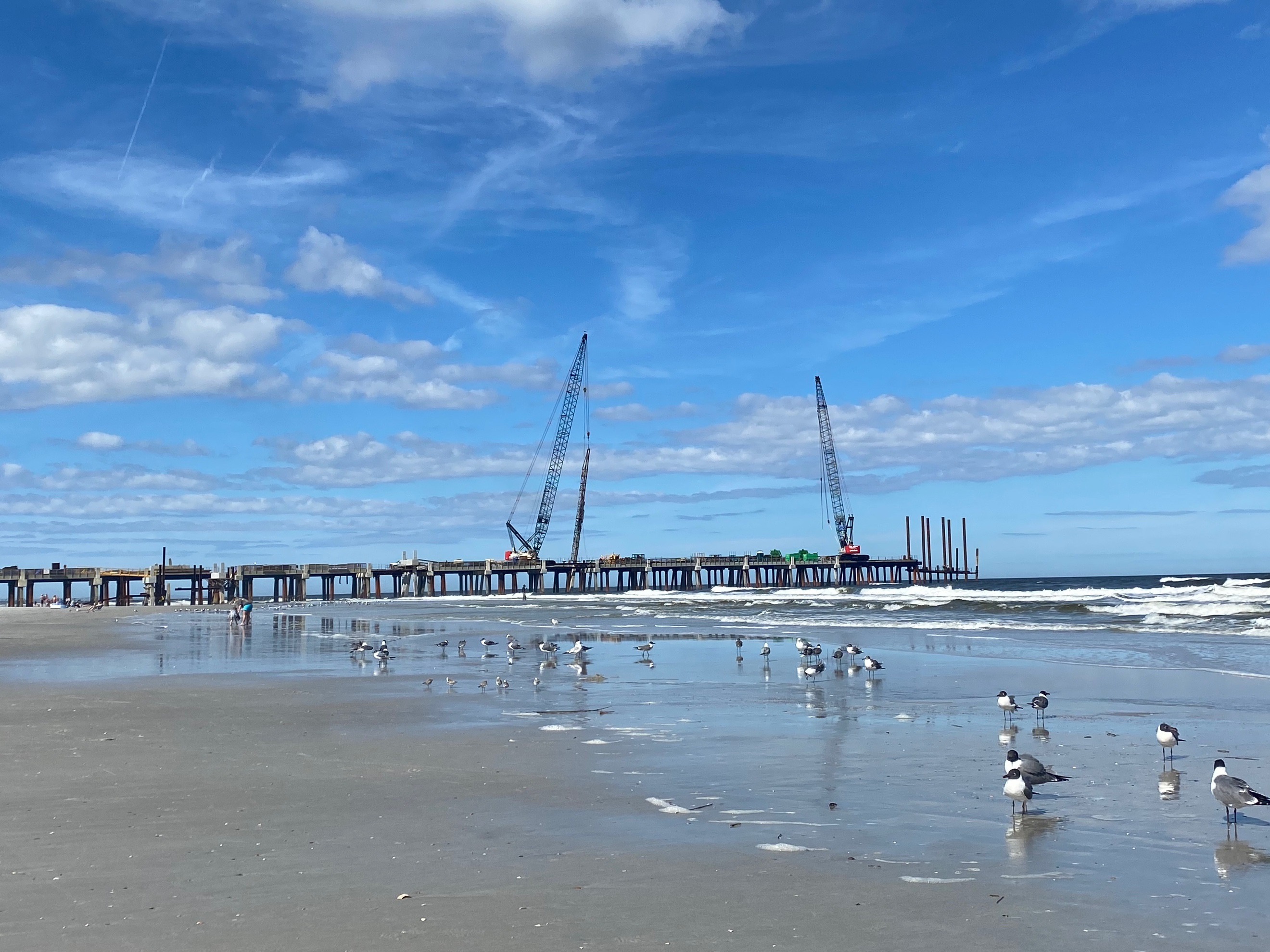 The tide is coming back in, and it’s time to move the beach chairs farther back toward the dunes. It’s 3 pm in this image, and the tide will keep coming farther and farther in. More shore birds are arriving, of a handful of varieties. In years past, the bait shop on the Pier would post tidal charts at the entrance. High tide, both in the morning and in the evening, would come right around six o’clock. Low tide would be at 12:18 pm, just after lunch. 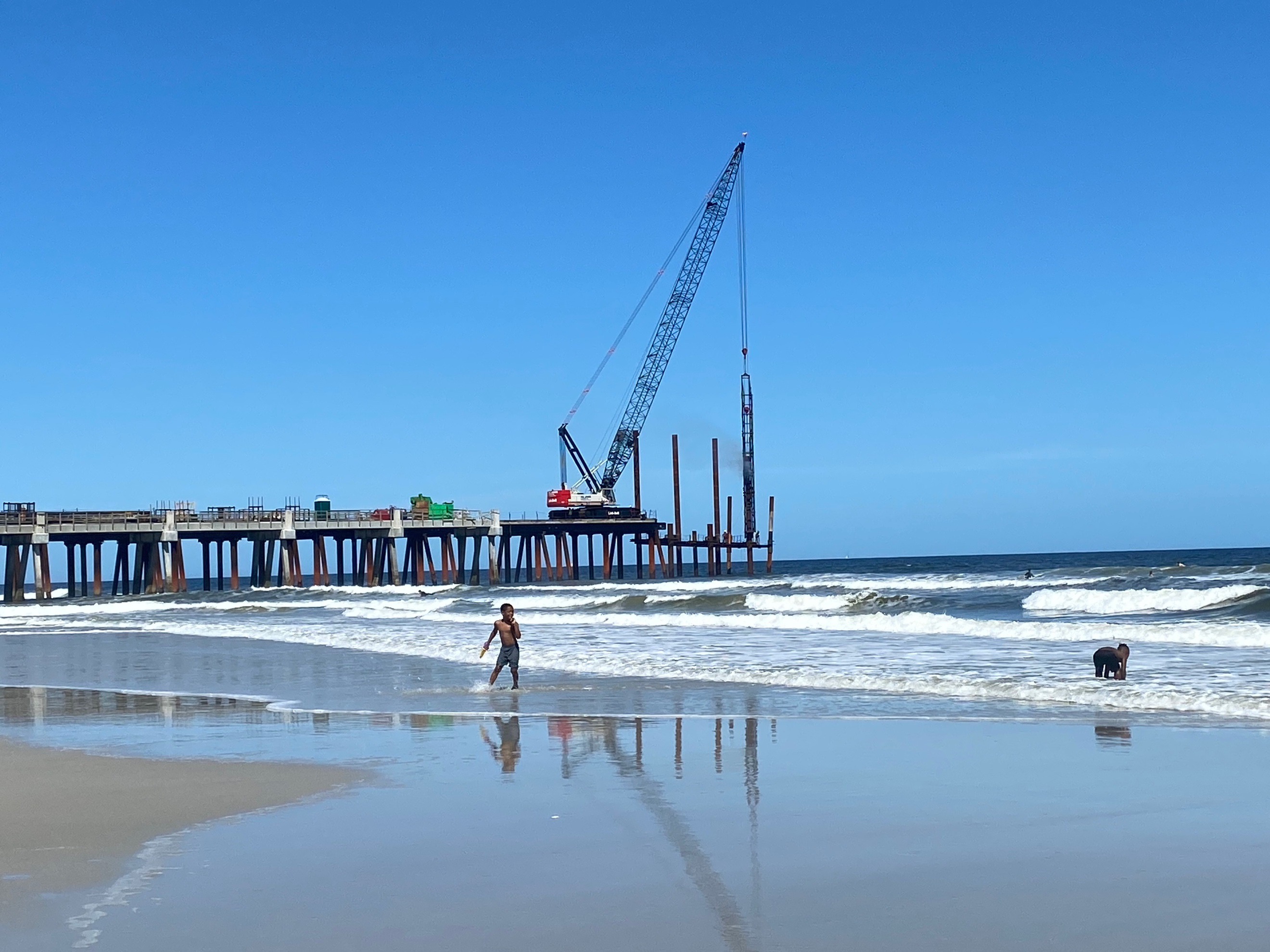 Perhaps when the Pier is finished, these two young boys will come back with rod and reel and a Coleman tote. The younger one is looking for, and finding, shells that he’s put in his pockets. It’s no secret that the Jax Beach Pier is the best place to fish without a boat. In the past, there has been a small charge to enter the Pier, but no Florida saltwater license is required here. The fall migration of mullet is prime Pier time for anglers, while black drum, weakfish, speckled trout and redfish are particularly plentiful. In the meantime, they could fish at that very spot if they wished to. 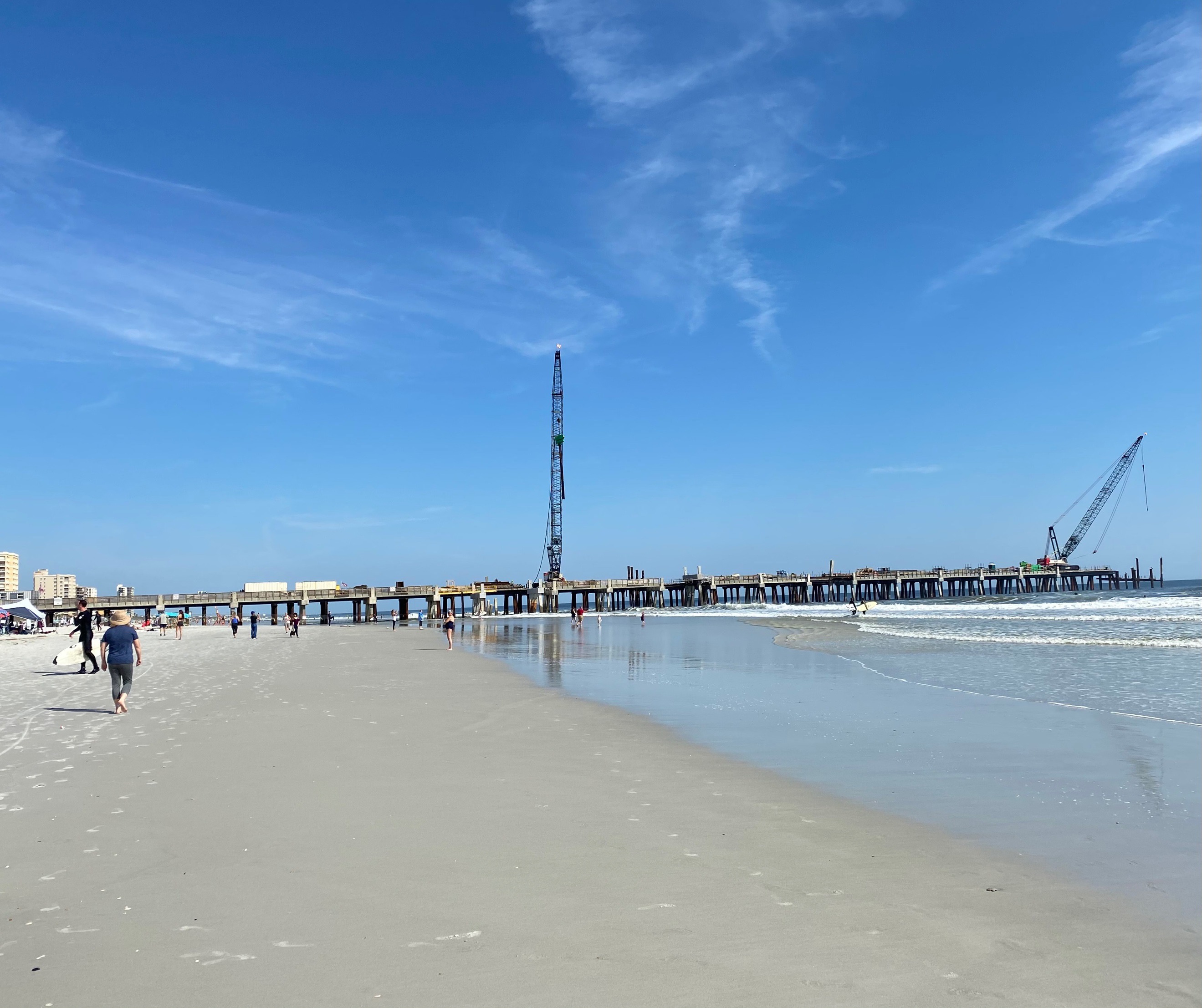 It’s the morning of Saturday, March 13 and the cranes on the Jax Beach Pier are still busy. The weather and the water are a little warmer today and more young people, with their wet suits, are surfing. Earlier this week, many people were strolling along the beach in puffer coats and swimsuit bottoms, but not today. All the puffer coats are gone and more people are in the water, and not just shelling or shuffling along. Yesterday afternoon there appeared a few volleyball nets along with a few players. 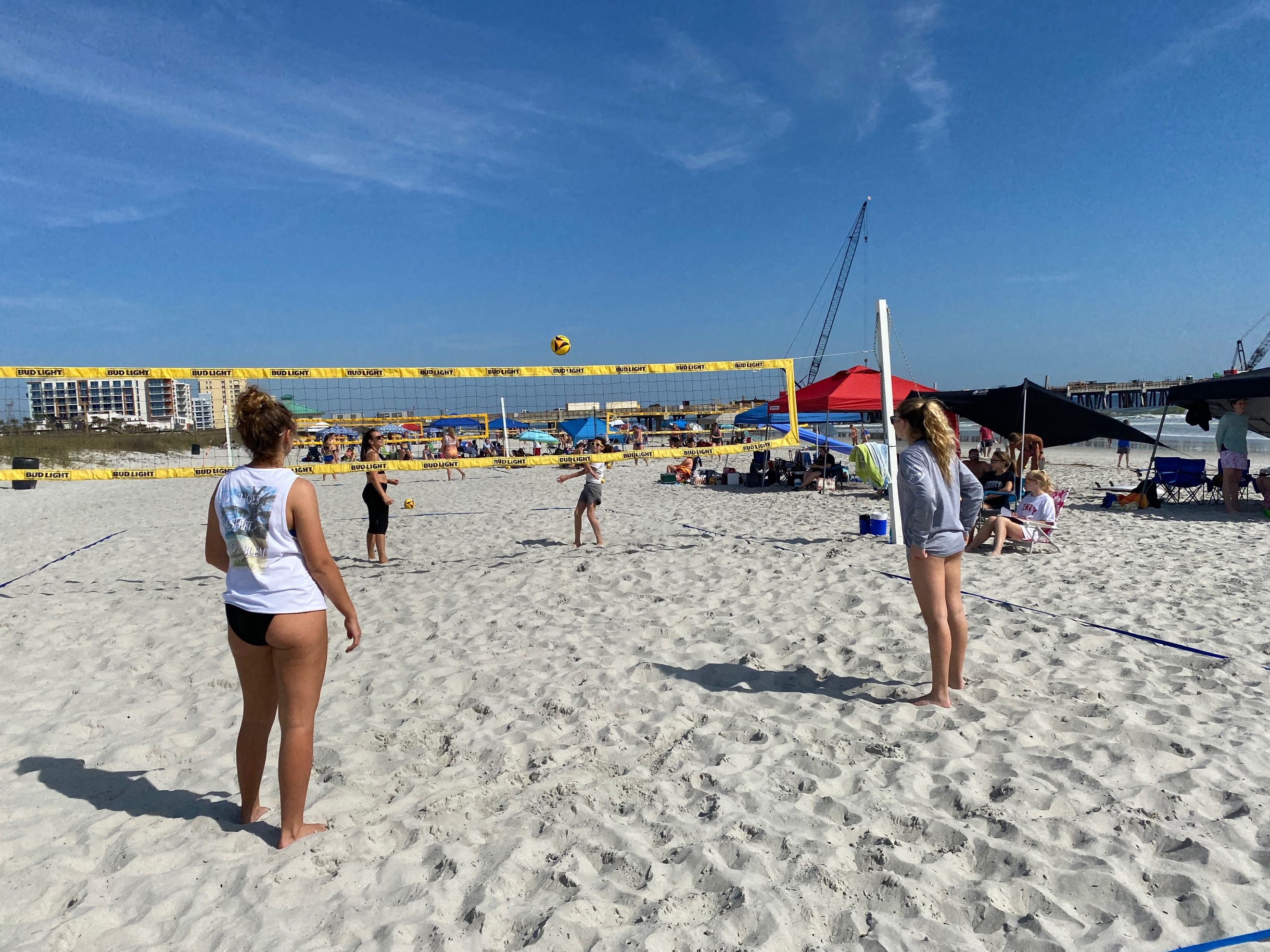 The Second Avenue N access point is busy, as there is ample parking plus all the amenities. The many volleyball courts set up the previous afternoon around this area are also busy. Most of the nets are right here. The temperature has already reached 73 degrees F (23 C) at quarter after ten in the morning, which brought everyone out this weekend. There is still construction going on at the Pier, but the weekend and the warmer weather allows everyone to get back to what’s most important: fun in the sun.