Mickler's Landing Beach rests inconspicuously between several larger, more famous beaches. Jacksonville Beach is just ten miles to the north, and the Guana Tolomato Matanzas Reserve is just to the south. Mickler's Landing is actually part of Ponte Vedra Beach, on the southern end of this beautiful stretch of oceanfront. This is a small beach but it has wonderful amenities for an attraction of its size. There are no shirt shacks, shuck shacks or snack shacks, so bring a picnic lunch and plenty of sunscreen. 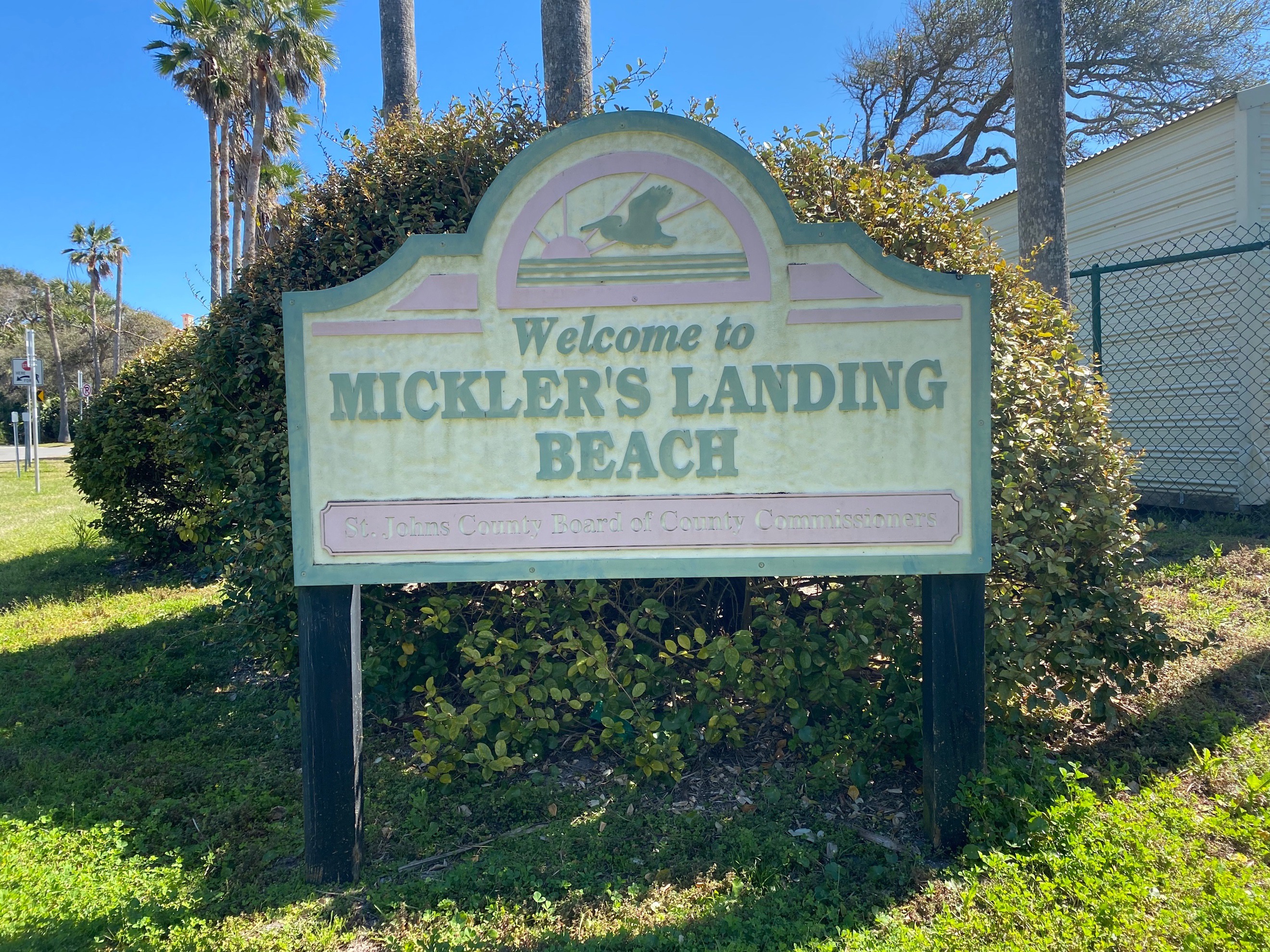 Mickler's Landing Beachfront Park is a great place to spend a quiet day. This beach is located at 1109 Ponte Vedra Boulevard, Ponte Vedra Beach, Florida, 32082. Ponte Vedra Boulevard is the eastern portion of Mickler Road, and is right off the A1A Highway. In fact, the two are split by the A1A, right at the confluence of the scenic Guana River and Lake Ponte Vedra. There's only one real item to note about this beach: Mickler is pronounced not like "Mick," but like "Mike," as the locals are heard to do. 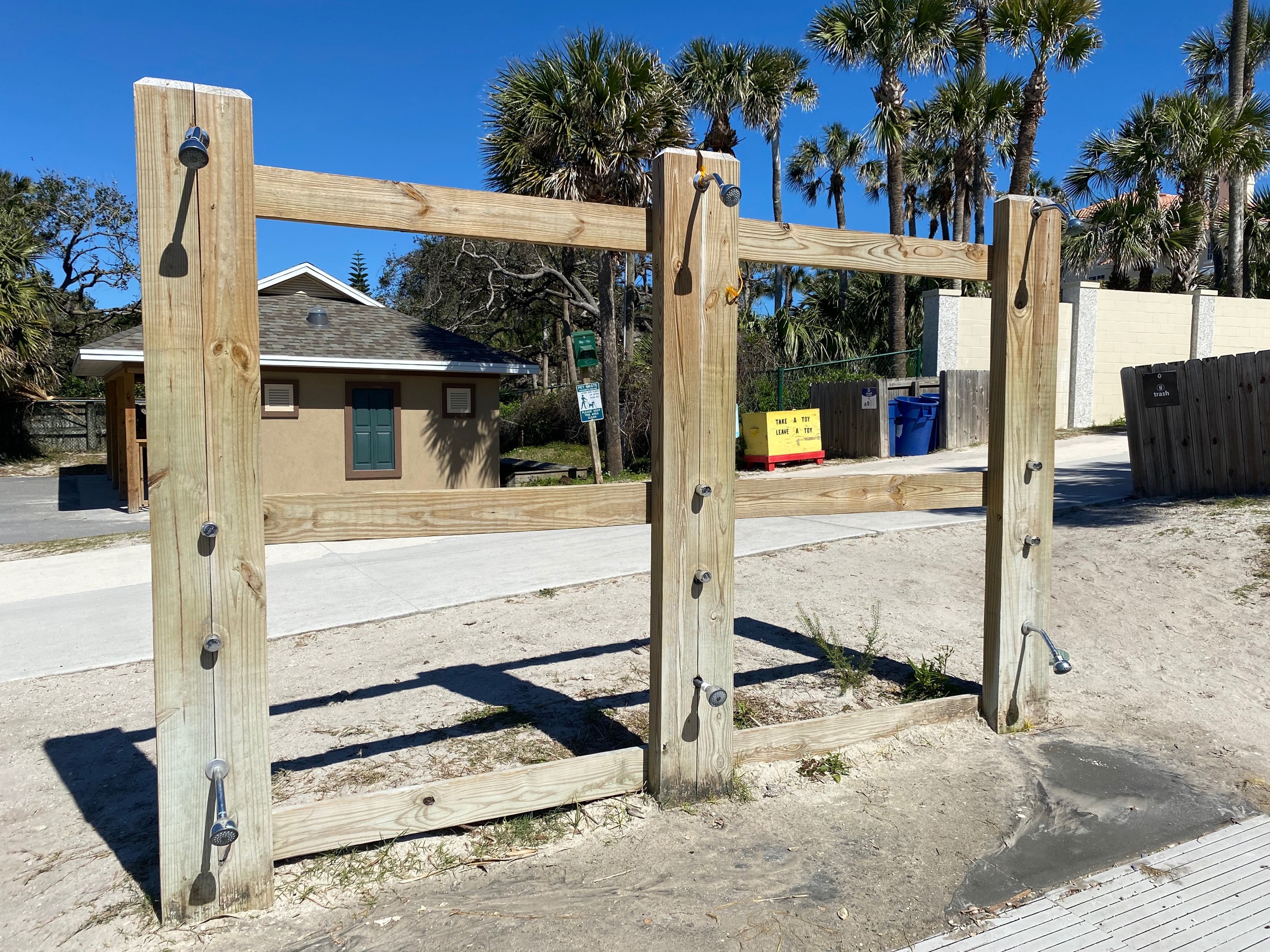 Mickler's Beach has an oceanfront full of amenities, and right here in front of the entrance is a great place to unpack them. In the background is the washroom, with clean and modern facilities for both men and women. There are "mutt mitts" for the owners of four-legged beach-goers. There is also a "take one, leave one" bin for beach toys. Next to that are several recycling bins for those water bottles and cardboard snack boxes. In the foreground here are the country showers, with shower heads both high and low. Not seen in the image, but off to the right, are receptacles for trash and non-recyclables. 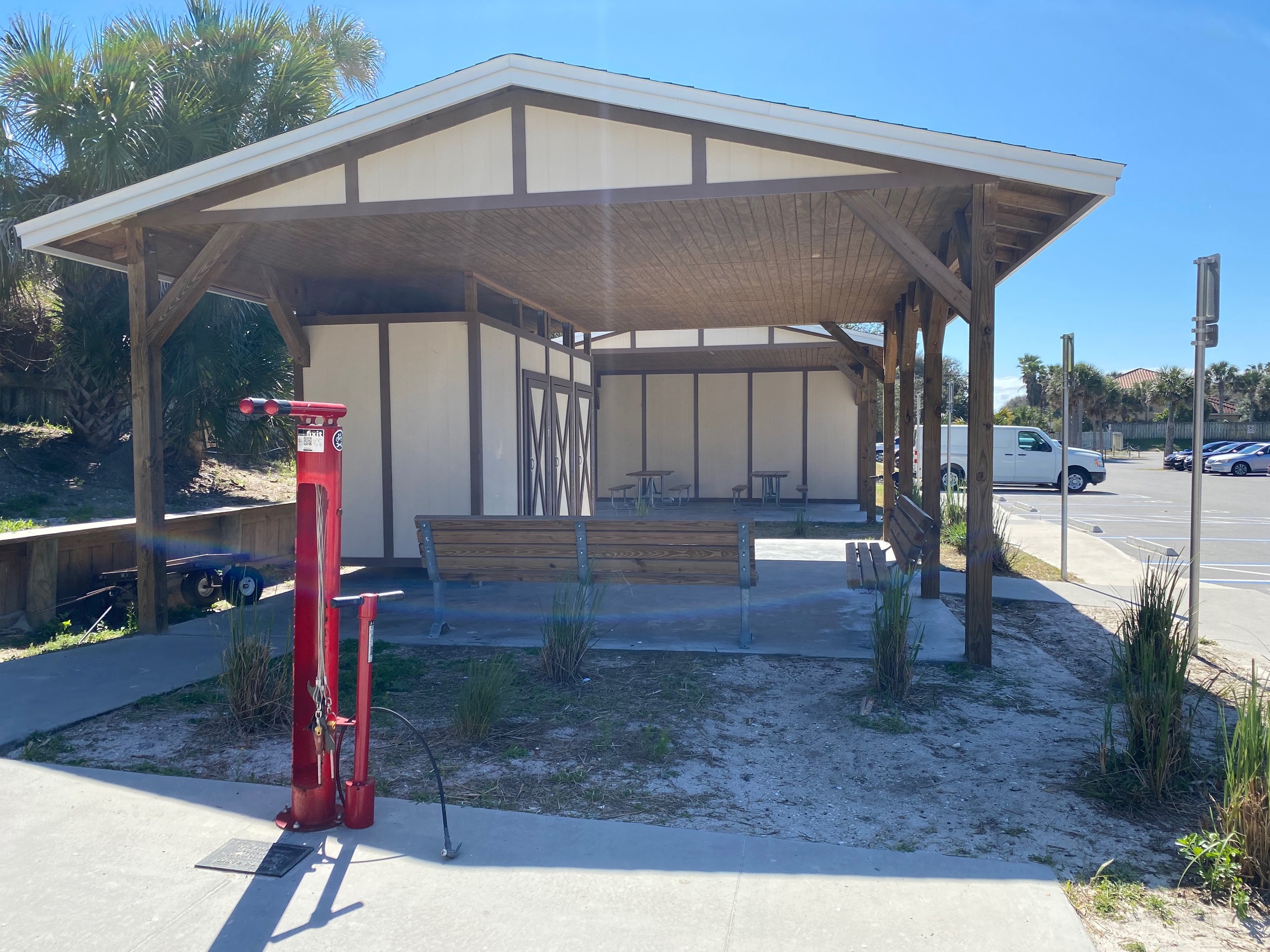 These covered pavilion areas are located right next to the country showers, by the boardwalk. The red air pump is for bicyclists to use, and riders can park their bikes at racks located in the parking lot. There are benches, and covered picnic tables in the background. Note also the many convenient Accessible parking spaces on the right; and spots for vans too. One amenity not shown here is horseback riding. There are a few parking spots for vehicles with trailers just out of frame, for riders with a permit. 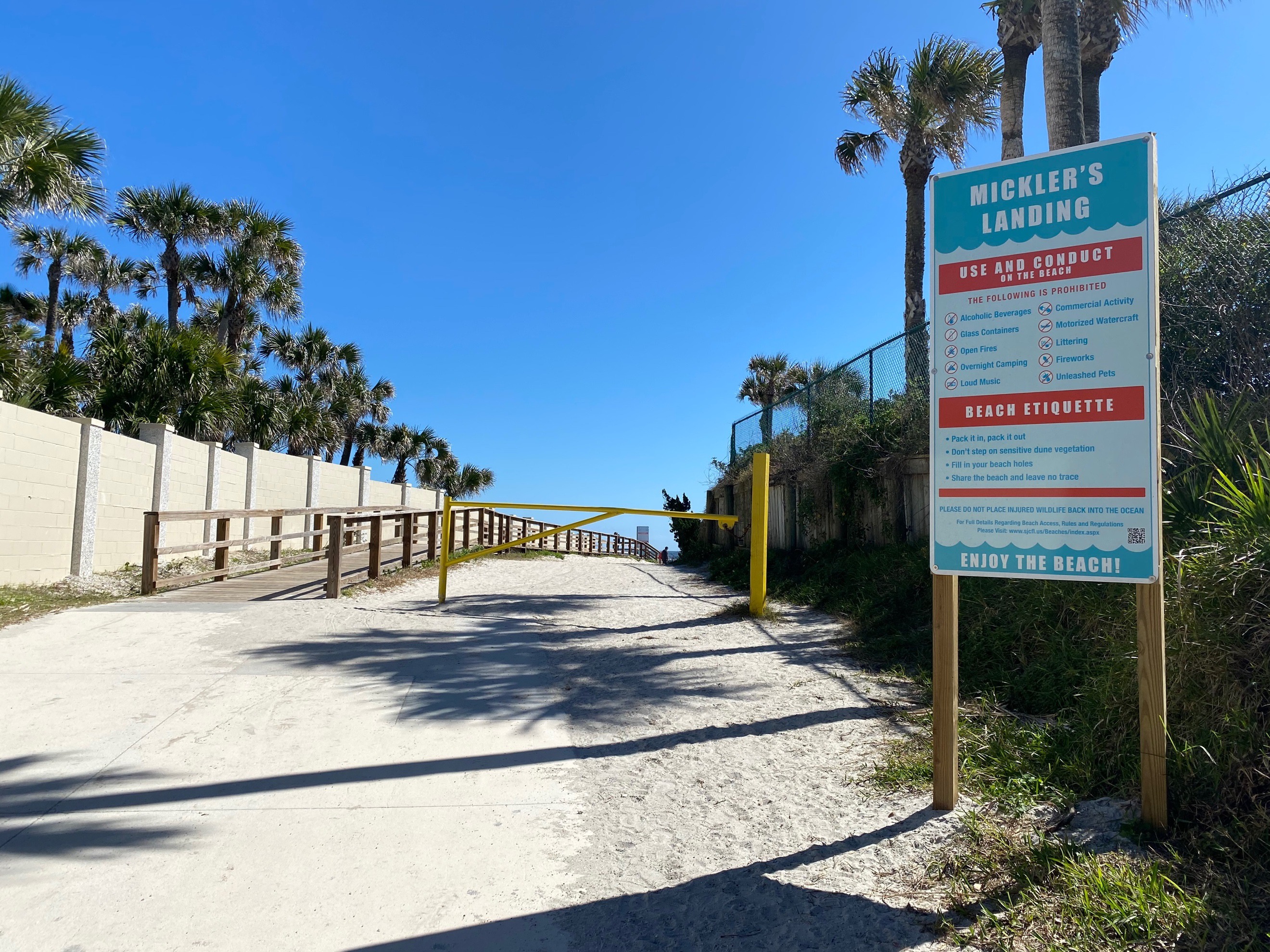 This is where the beach begins. There are no unusual advisories today and it's a yellow-flag day. Beware of rip currents; if caught in one, don't fight it and "swim out of it, and then to shore." Another sign not shown here asks boaters to steer clear, slowly, of the endangered North Atlantic Right Whale, if spotted. Folks who spot an injured, dead, or entangled right whale are asked to call the Coast Guard. 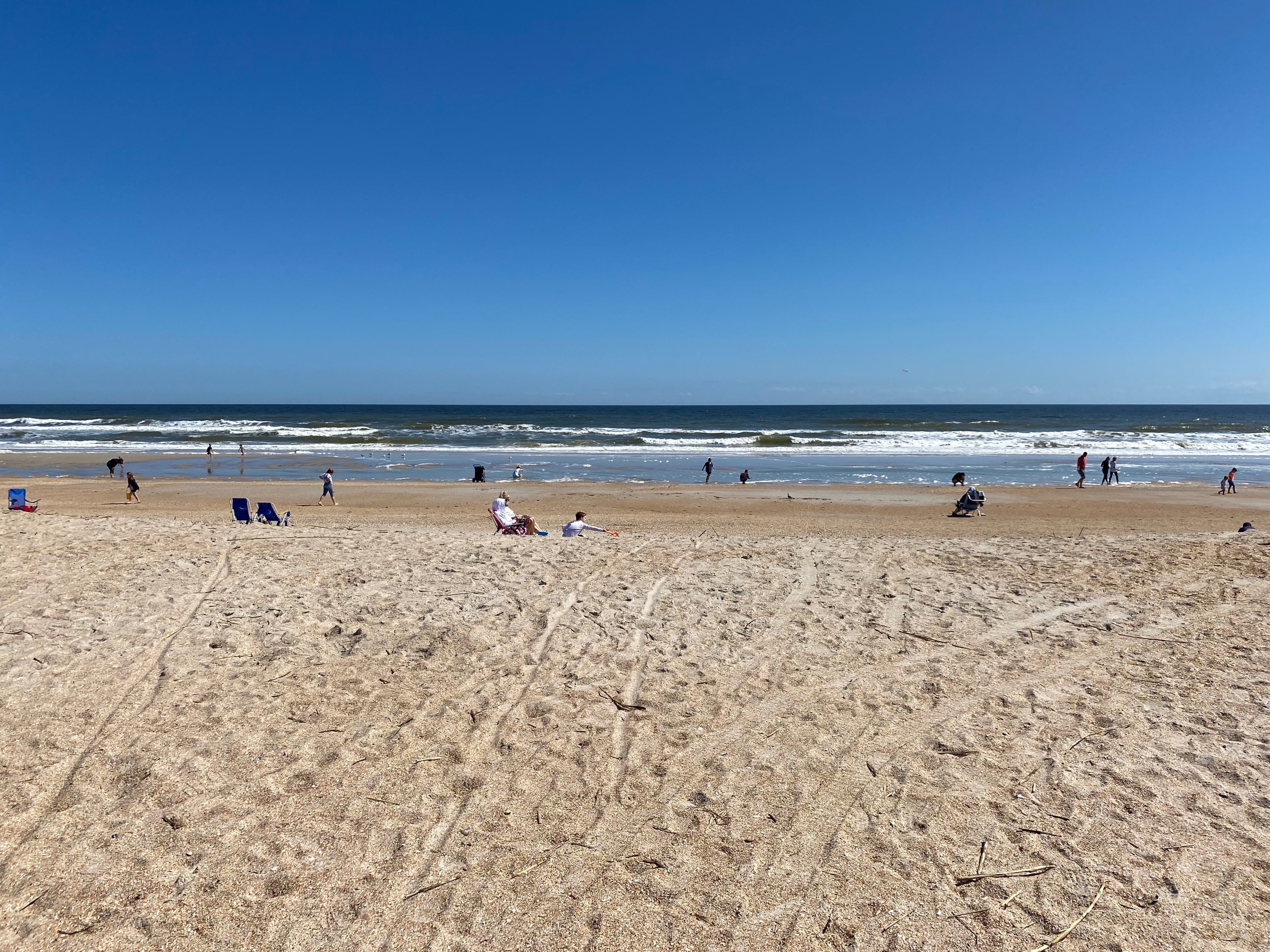 What a beautiful day at Mickler's Landing Beachfront Park. The high today, Tuesday, March 9th, 2021, will be 64 degrees F (18 C) until mid afternoon. It's 11:30 am. Most beach-goers are wearing windbreakers over their swimsuits and just a few hardy souls are out in the water, which is choppy today. Not a cloud in the sky, which will make the beach seem warmer than it is. Newcomers to the St. Augustine area may want to download an app for their smartphones called Reach the Beach, from St. John's County Beach Services. Parking here is free. 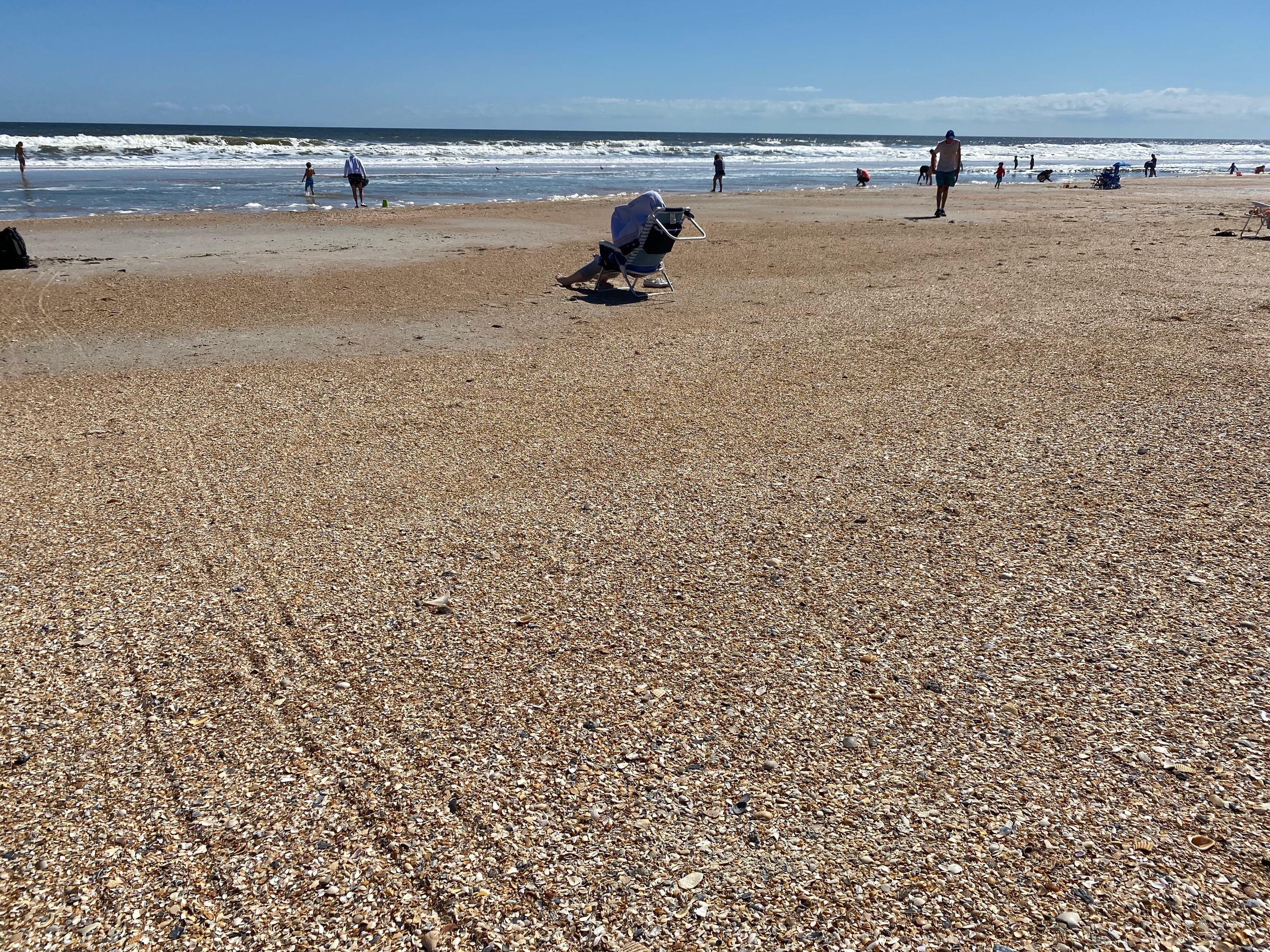 Welcome to the pink coquina sands of Florida's Historic Coast. Not as foot-friendly as the soft white sand of the Gulf Coast, this shoreline is best traversed with beach shoes or water Mocs. But this sand does have its charms. Shells abound here. A coquina shell is a "donax variabilis" clam not much bigger than a fingernail and also abound on the beaches of Southwest Florida. Sea creatures feast on coquinas, which indicate a healthy beach. Coquinas are also known as the butterfly shell clam, which they resemble when open, or the Pompano clam. 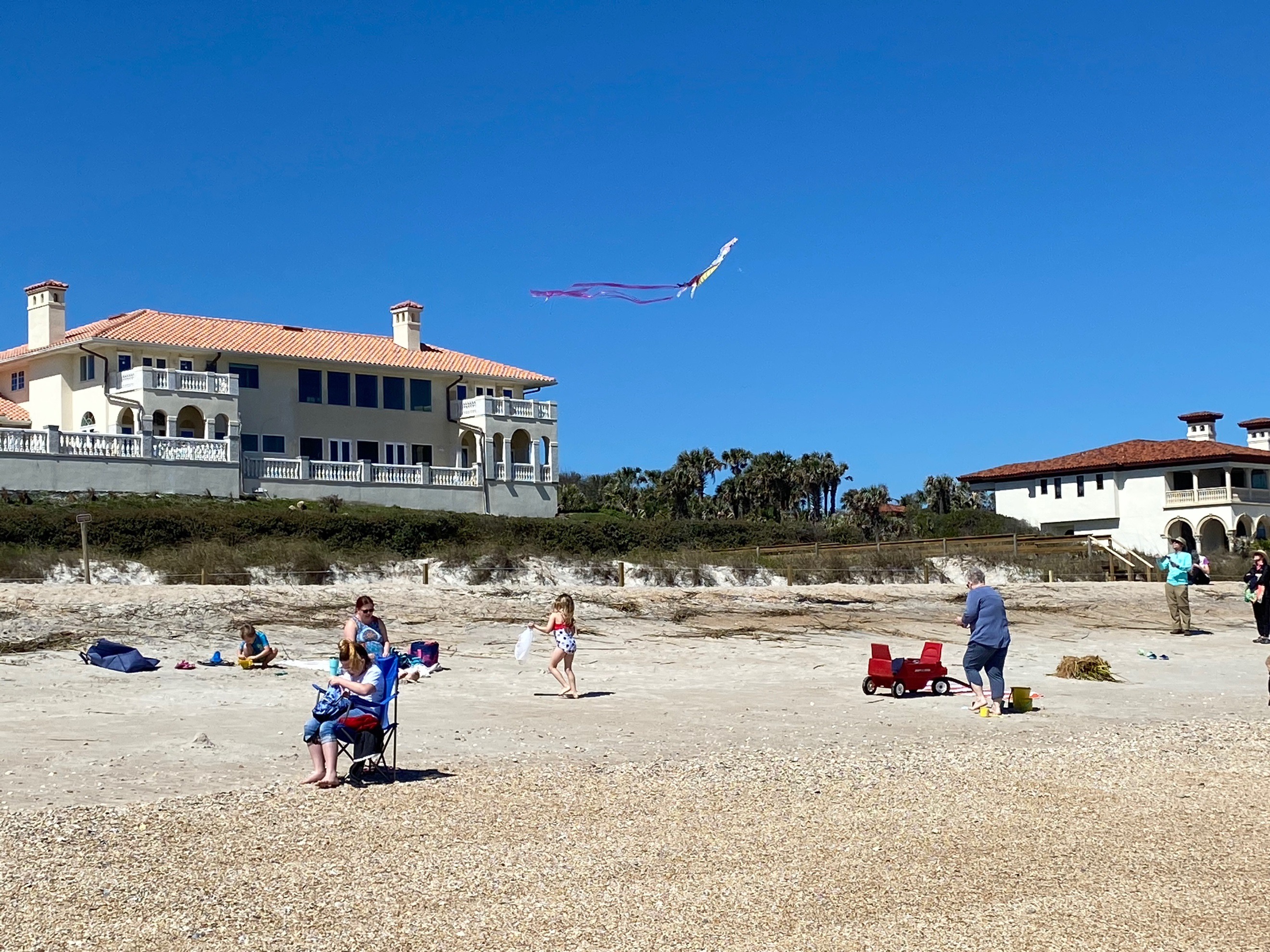 Mickler's Beach has a variety of sands to walk upon, and to gaze out upon, but there's more to look at here than shells. There are magnificent homes along the shoreline high above the dunes. Just back from the waves is a vast beach on which to plant a lounger or an umbrella or perhaps take advantage of the sea breeze to fly a kite. The beach goes in either direction for quite a stretch, and the packed sand is easy to walk on either barefoot or with shoes. 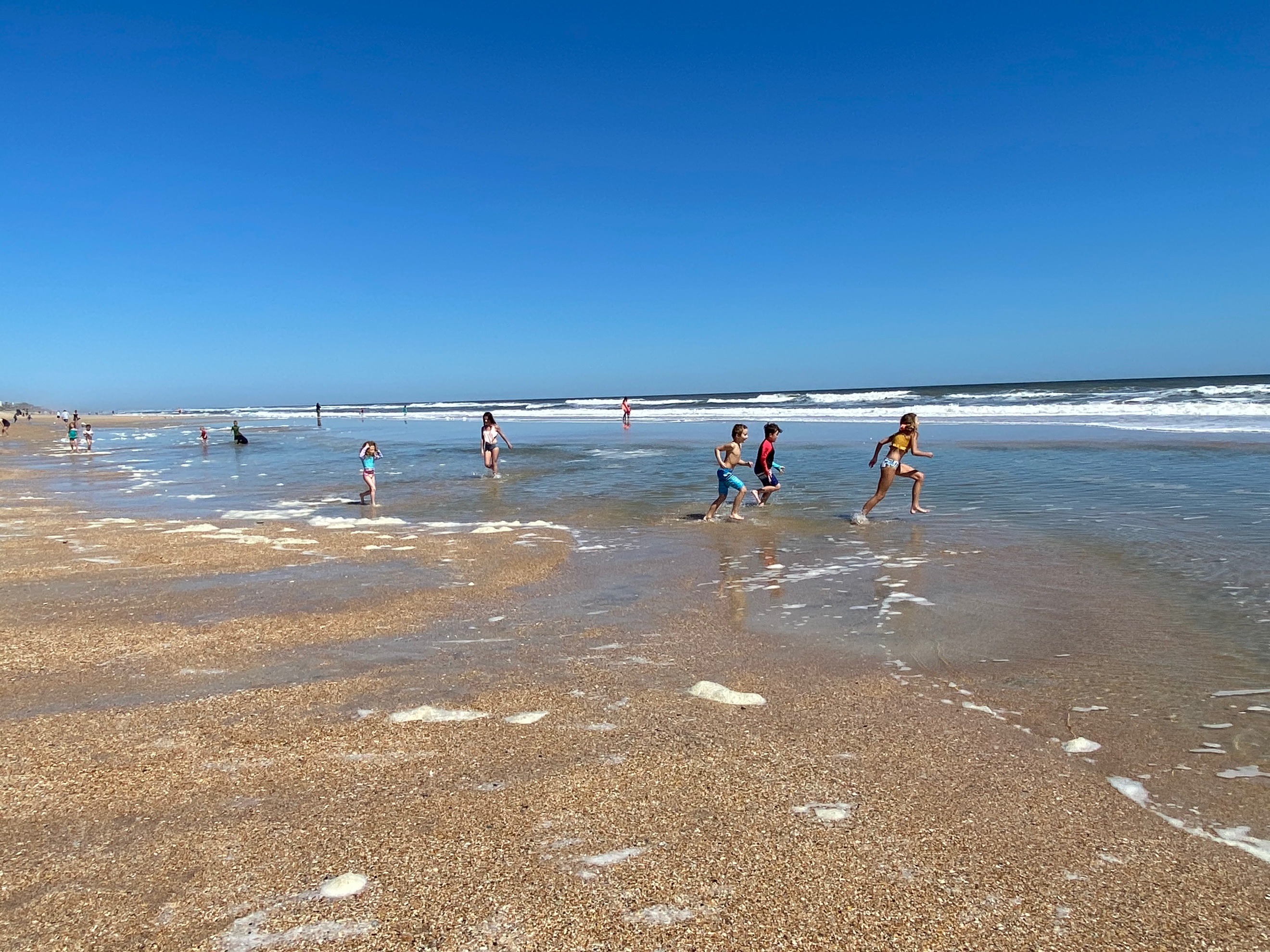 All day long, kids ran back and forth between their beach chairs and the waves. There were a few adults in full-body wetsuits in the water, but most of the grown-ups were in their chairs wearing windbreakers and long pants. A brave few rolled up their pants legs and ventured slowly into the surf, but they didn't stay in the water for long. To be honest, there isn't much for grown-ups to do here unless it involves the water, or watching out for the kids in the water. The water is fairly warm in the shallow end of the ocean, but a little farther out it's quite cold. 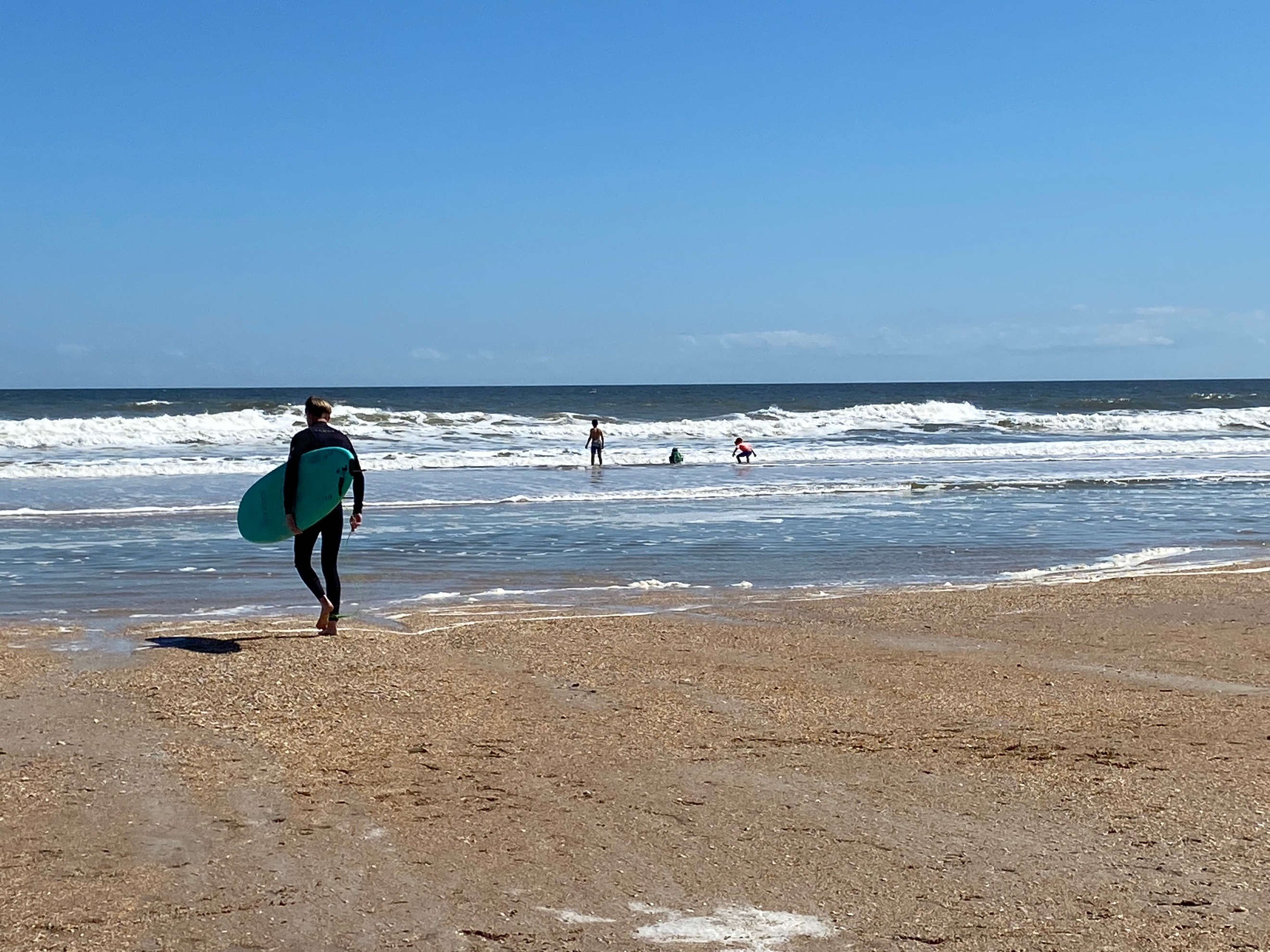 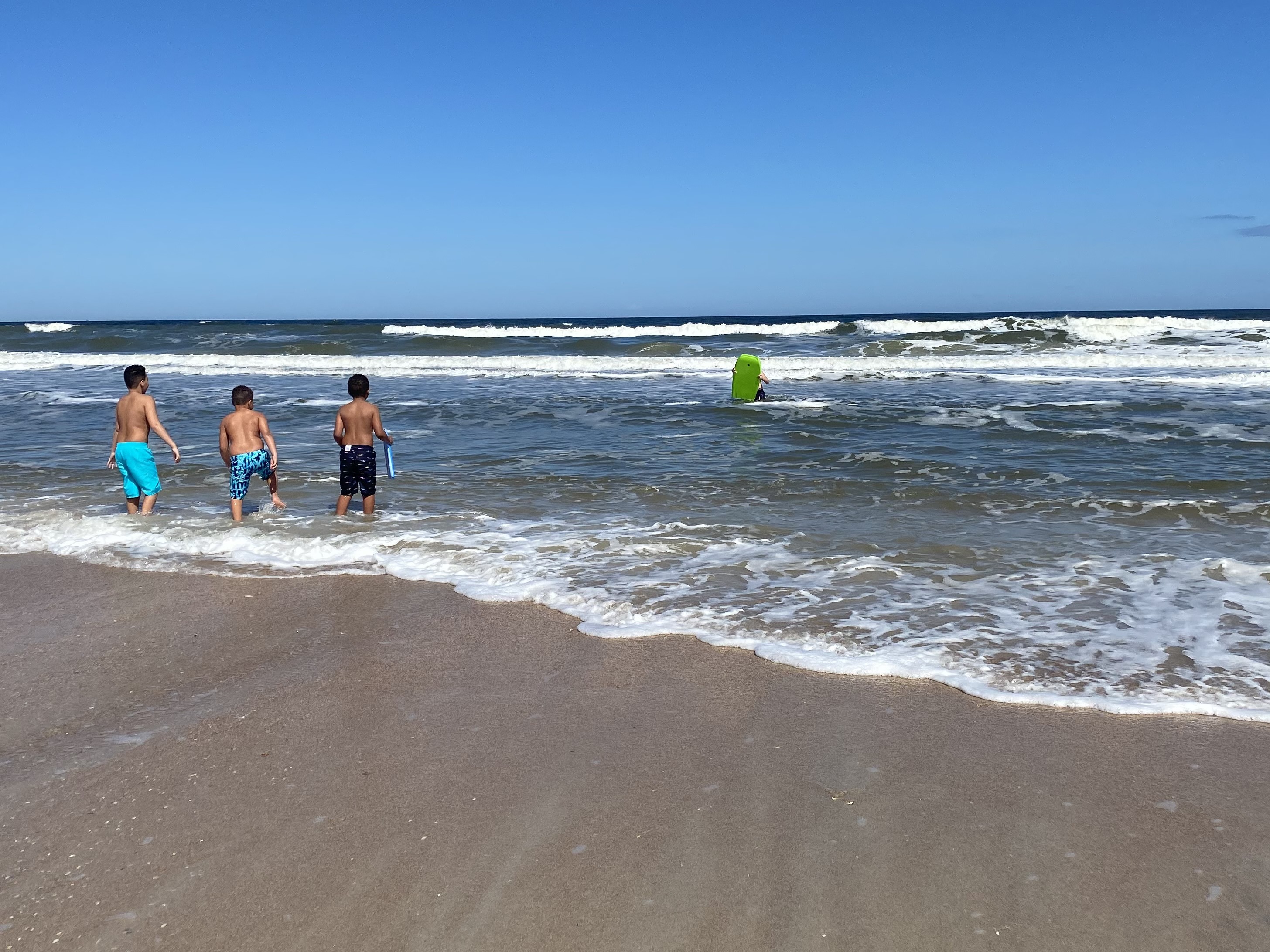 The Atlantic Ocean is saltier than the Pacific Ocean, and the Pacific Ocean is saltier than the Arctic Ocean. The Indian Ocean isn't very salty, either. The saltier the water means the denser it becomes. Right off the east coast of Florida is some of the world's saltiest ocean water, whereas fresh water flow from the Amazon River in Brazil takes some of the bite out of the salinity on their famous beaches. A couple of tumbles in the waves at Mickler's Landing--with mouthfuls of water and sea foam-- and these kids will know for sure where they are. 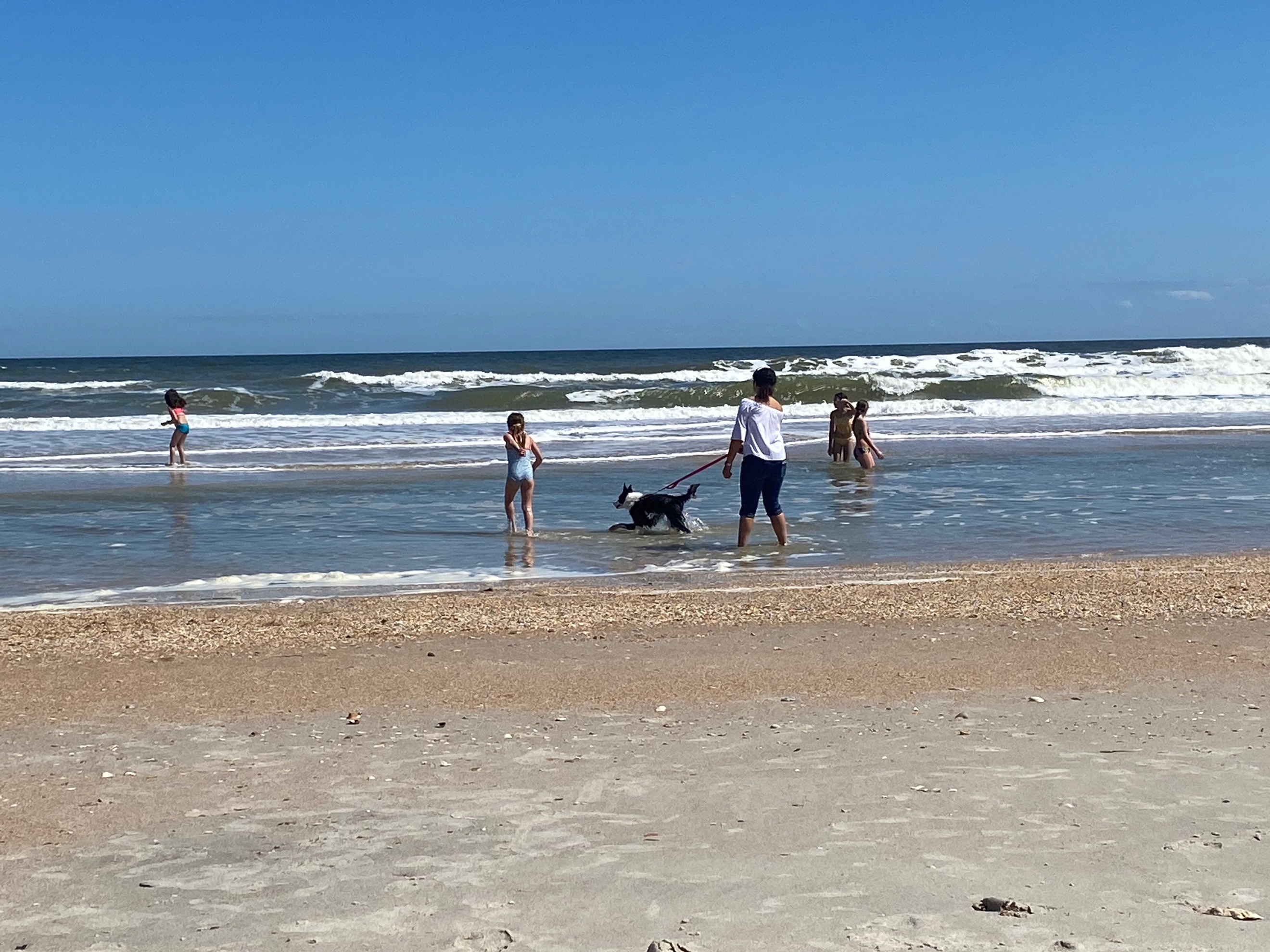 High tide at Mickler's Beach came at just before five a.m., on the morning of March 9, 2021, and would come again at nearly 5:30 in the evening. Low tide, on the other hand, would come right around 11:30, both late in the morning and late at night. This image was taken at 12:30 pm, when the tide was fairly low, at -0.2 feet. The dog in this image was obviously taking advantage of the low tide, running and careening around her family as they bounced in the waves. Leashed dogs are always welcome here, high tide or low tide. 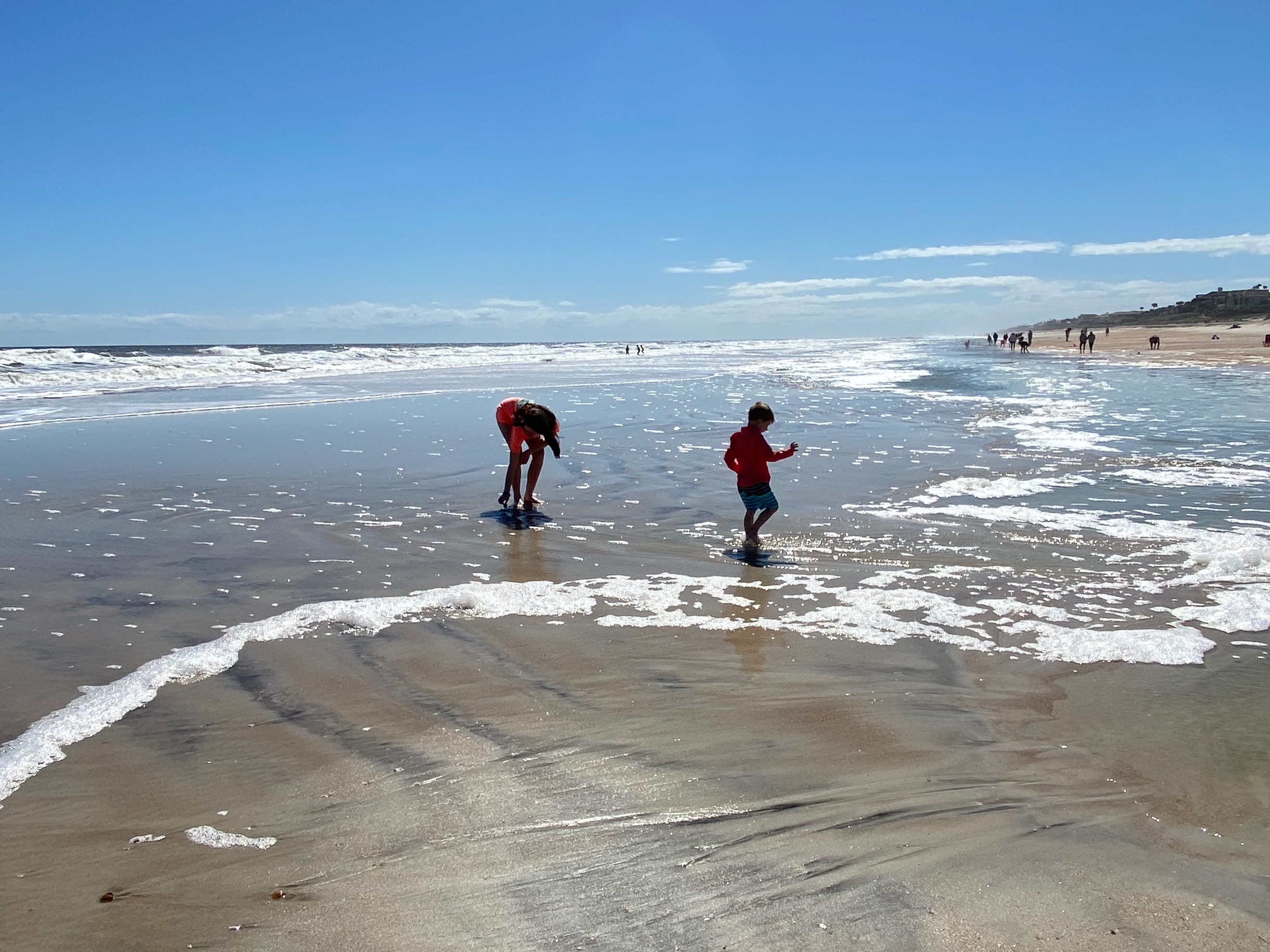 The tide is starting to come back in, but it's still low enough to find shark teeth among the shells along the shoreline. How to find them? The first thing is to be at Mickler's Landing, according to the University of North Florida's resident shark-tooth finder, Dr. Jim Gelschleichter. Shellers will have the best luck searching the shell beds. Some shark-tooth hunters simply sit next to a shell bed and start looking. Also, walk along the waterline, where it will be easier to spot the small, shiny black triangles as the water moves the sand in and out. Look for a shine and a sharpened edge. Good luck! 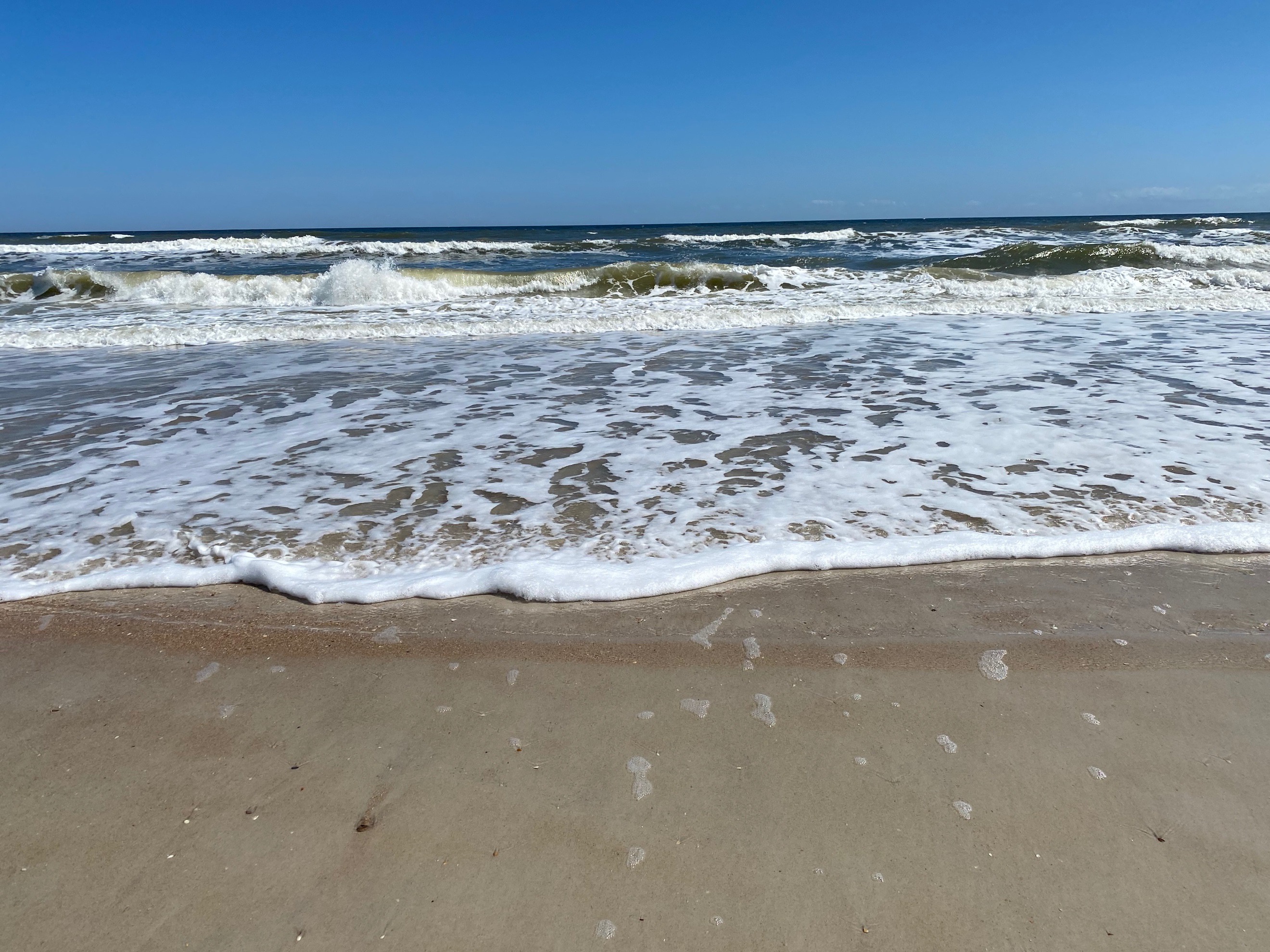 A sheller could go all day without finding a shark tooth, but more information about this beautiful beach is easy to find. Ponte Vedra, where Mickler's Landing is located, used to be known as Mineral City due to the mining operations once located here. A developer soon decided that a new name was needed, and since the area was once claimed by Spain, a Spanish name was chosen. Mineral City was of the approximate latitude as the Spanish coastal city of Pontevedra (which means "old bridge" and was named for a Roman bridge erected in the town) and so Ponte Vedra came to be. 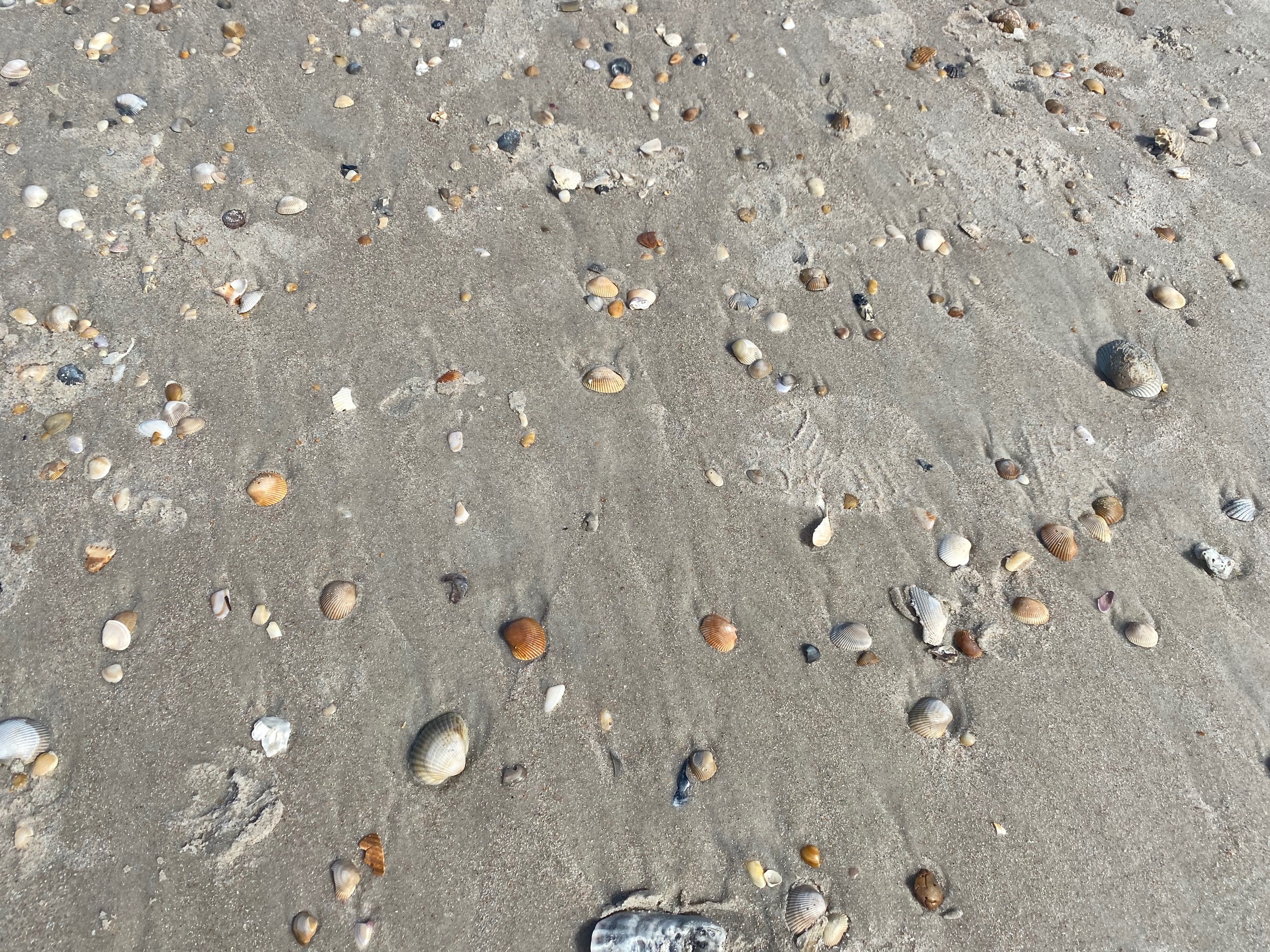 This is typical of the kinds of shells at Mickler's Landing. Scallop shells seem to be the most plentiful. Scallop shells are a symbol of the camaraderie of pilgrims on tour, and are associated with both James the Apostle and the Greek goddess Aphrodite. There are many species of these saltwater clams or marine bivalve mollusks. Most of these creatures live in the sand, and can swim to safety if a predator like a starfish comes too close. The name of the Shell of St. James comes from the scientific family known as Pectinidae of the genus Pecten. The Latin word "pecten" means "comb." 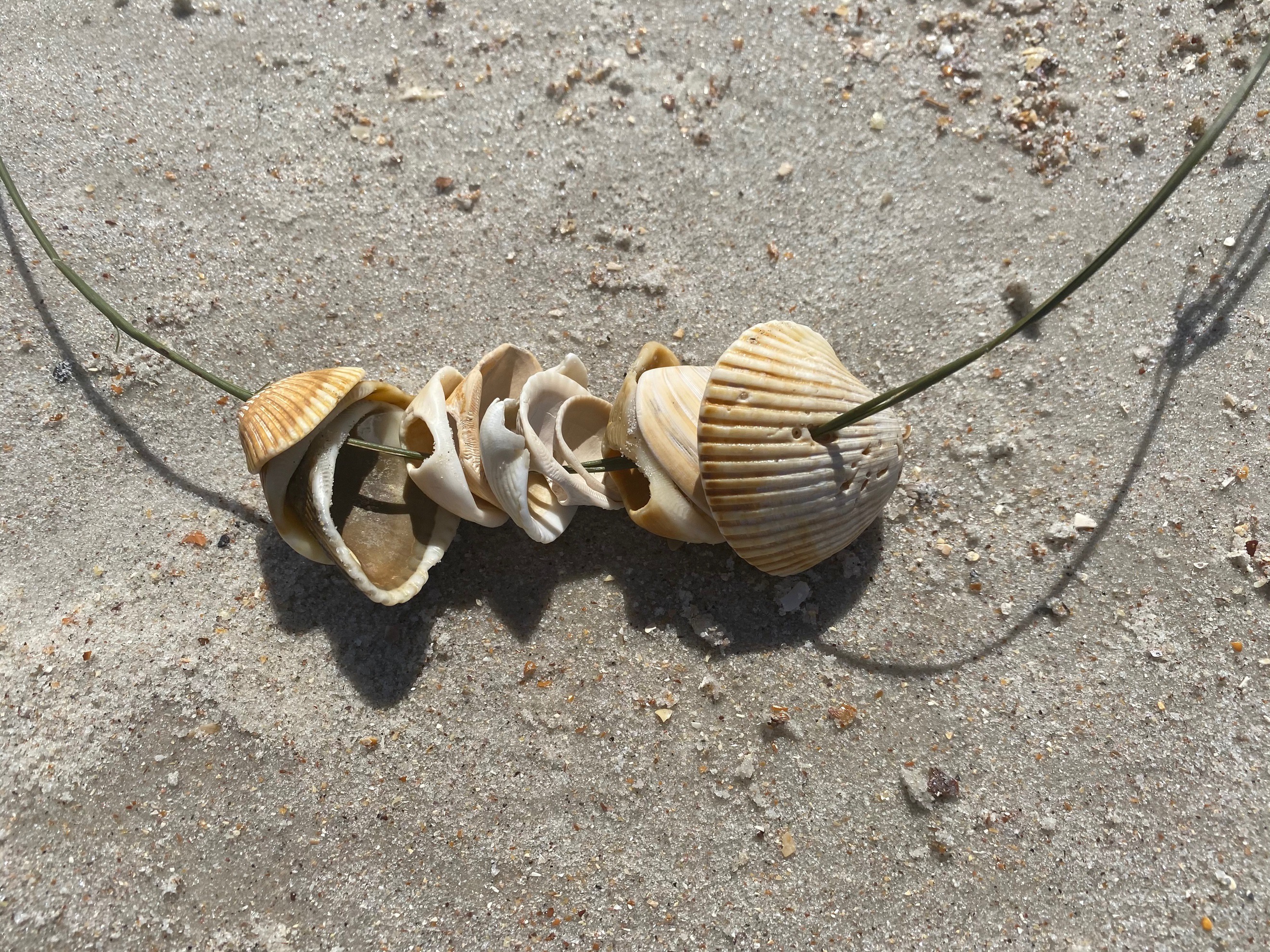 If you didn't bring a shelling bag, or a tote from the Publix grocery store, how would you be able to transport your sea treasures home with you? Perhaps a strand of sea grass would help. This grass is plentiful on the dunes, but also blows outward toward beachgoers during the day. Many of the scallop shells have holes in them already due to predation by slightly larger sea creatures like snails. The tongue of the snail, the tough and toothy radula, drills a hole in the scallop shell and scoops out the fleshy animal inside. In addition to the scallop shells, you'll find many snail shells on Mickler's Beach. 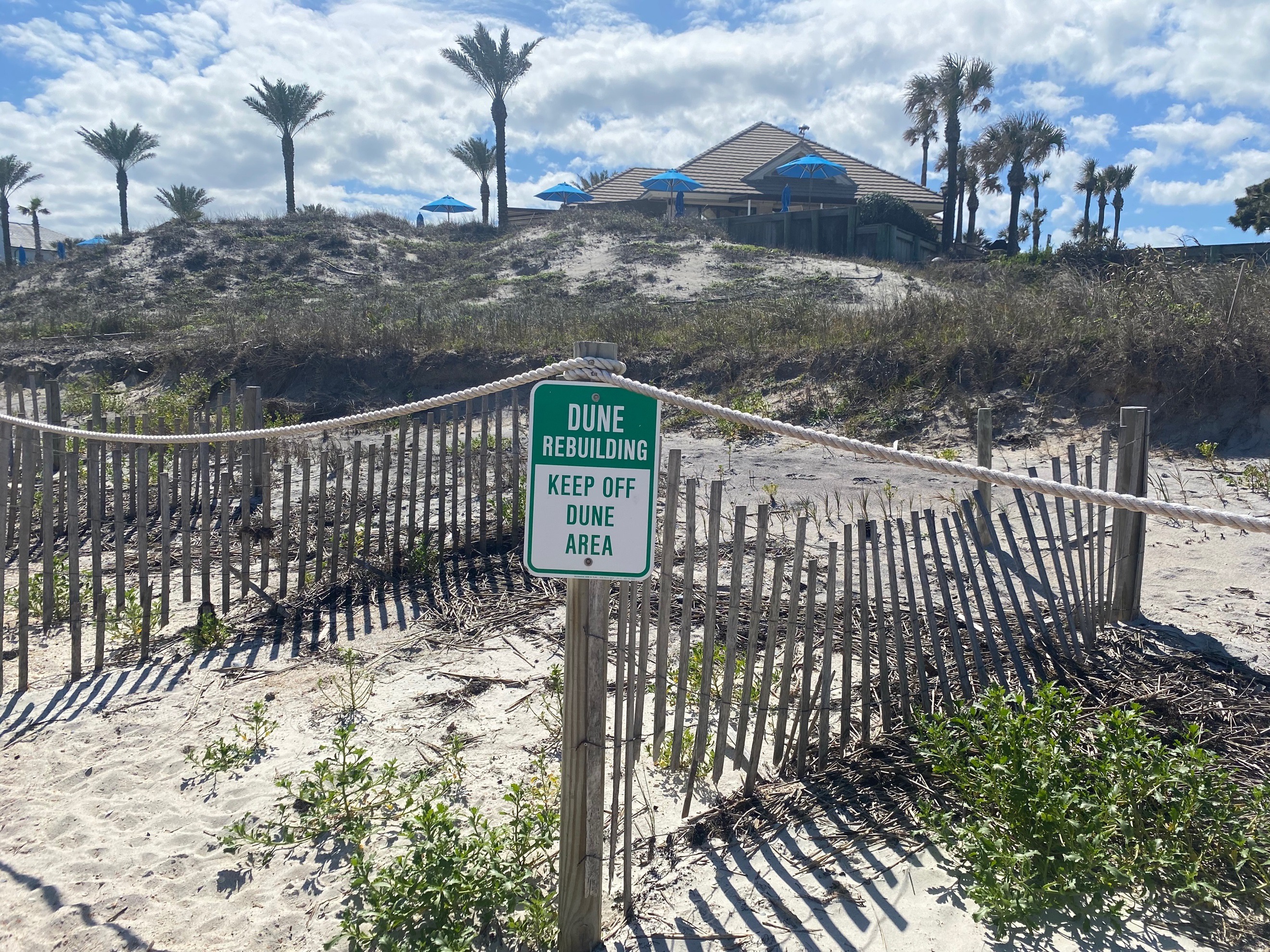 Beach dunes are under constant threat of erosion; hence the rebuilding effort with dune grasses. The gopher tortoise, which is a Florida-protected animal, makes its burrow homes in these dunes. Other animals live in these dune-burrows as well. These dunes may not look like much, but they also protect land farther out from the shoreline, like the homes and clubs along the beach. The Plantation Beach House, a private club, is shown in this image. 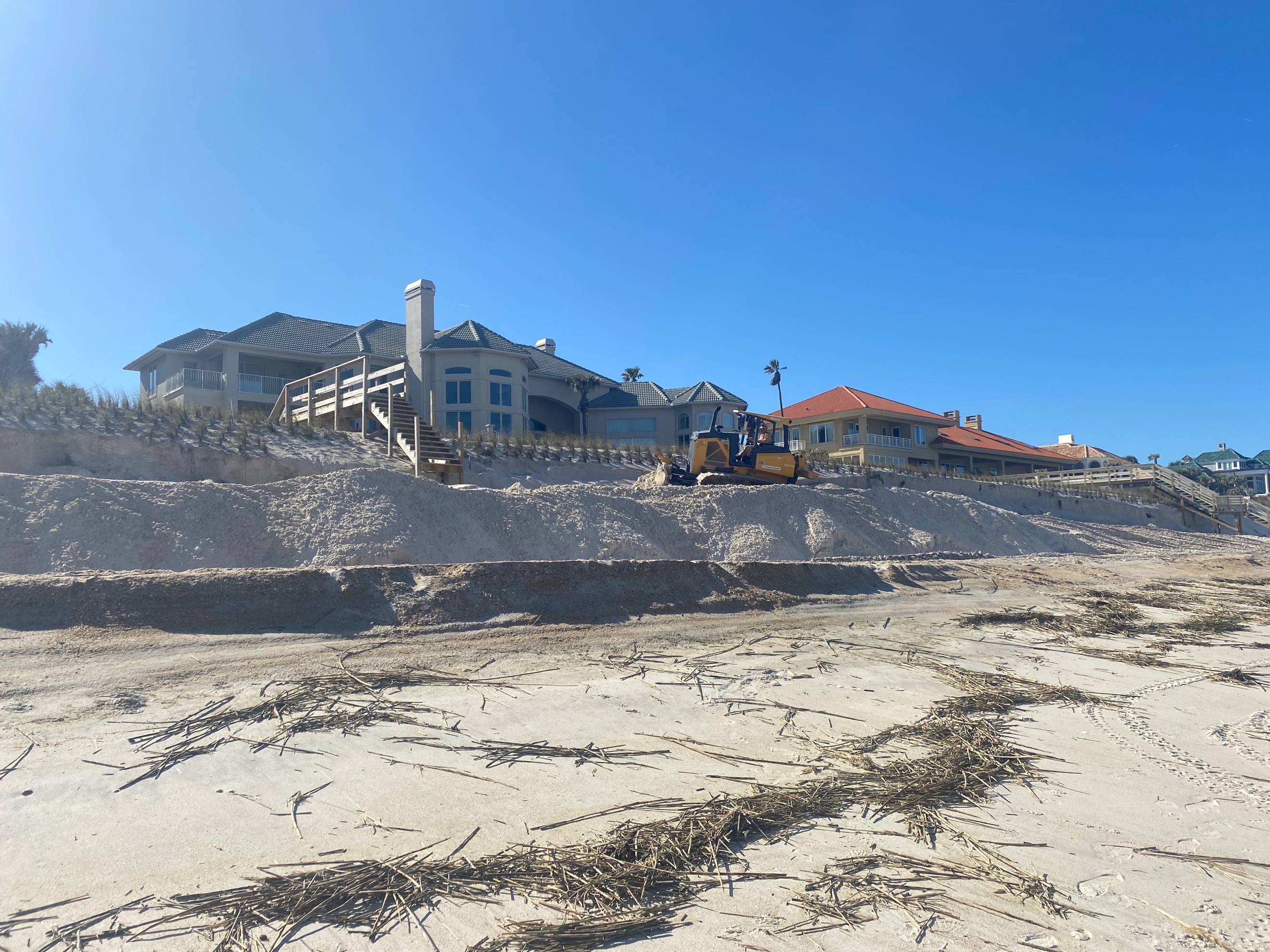 All along the shoreline of Myklers, as the locals call it, are magnificent homes that add to the beautiful view of the beach. Ponte Vedra Beach is actually part of Jacksonville Beaches, and is between downtown Jacksonville to the north and St. Augustine to the south on the Atlantic Coast. The average home price is almost three-quarters of a million dollars. There are many famous people who are past or present residents of Ponte Vedra, including Florida Governor Ron DeSantis, football player Tim Tebow and the late TV personality Fred Rogers. 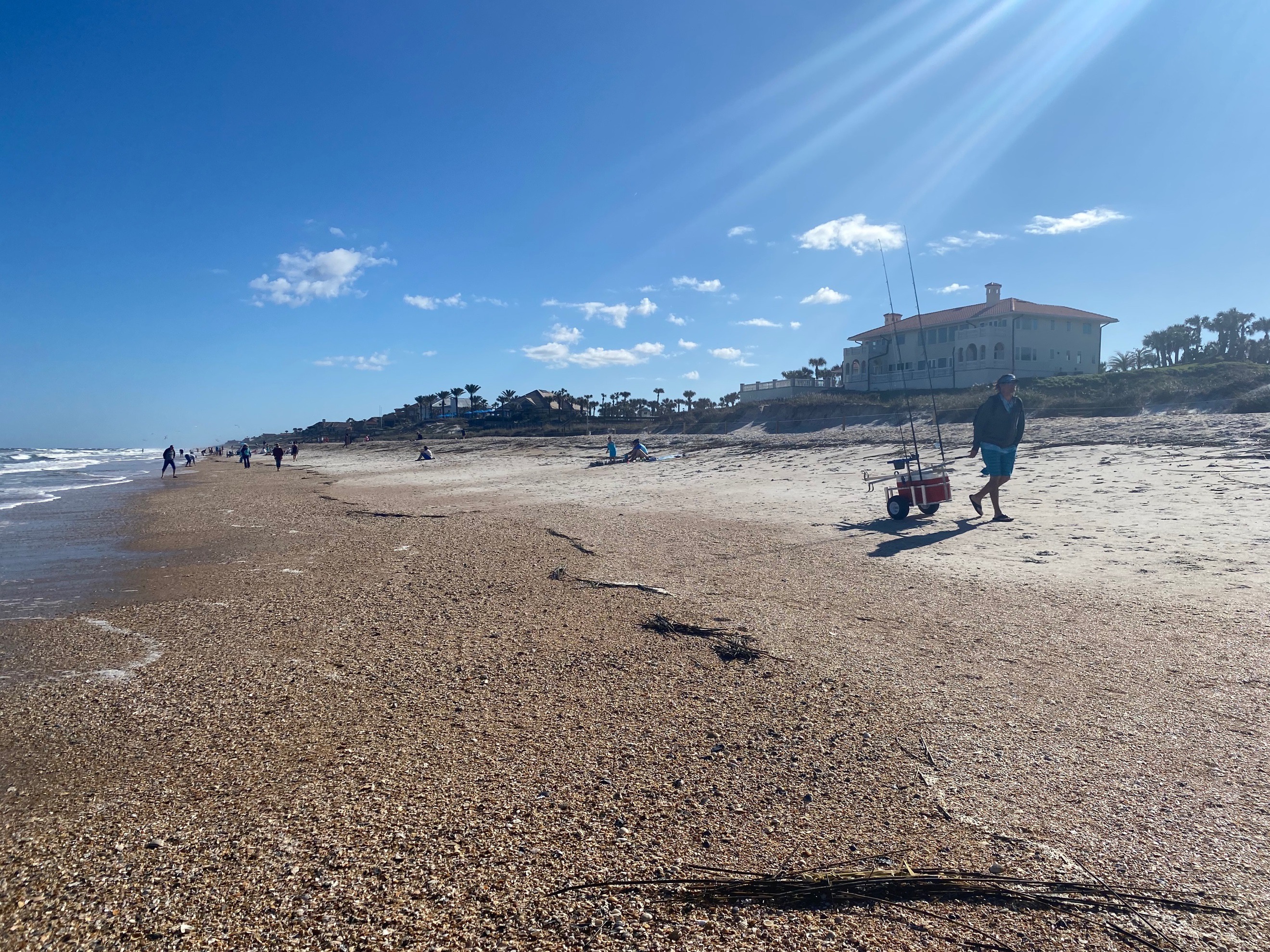 After struggling to reach a high of only 64 degrees F (18 C), the temperature at Mickler's Landing is now slowly starting to drop, degree by degree. Anglers with carts are now replacing surfers and shellers, and a lot of folks are packing up for hotel or home to wash off the sand before heading out for dinner. There are almost fourteen hundred restaurants within fifteen miles of this beach. Golf is big here too, as it has been home since 1982 to the PGA's The Players Championship. 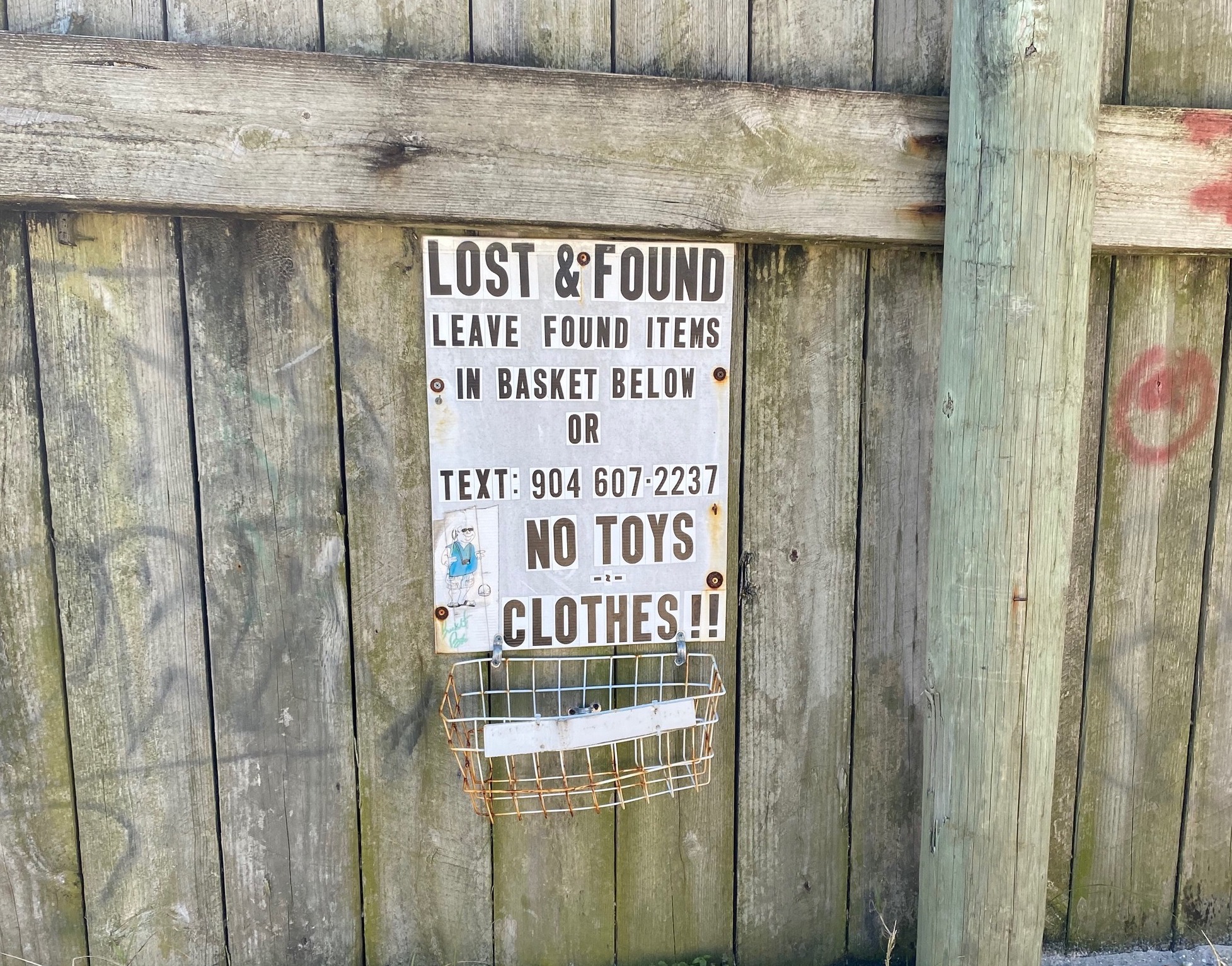 This is just one of the many thoughtful amenities at Mickler's Landing that will be missed until returning next season. Beach-goers pick up after themselves, with no litter in sight. If something like a cell phone or set of car keys is found half-buried in the sand, there is a place for it right here. All amenities were in good working order. Parking is free, but will be filling up early in the morning once the weather starts heating up in the early summer. There is a lifeguard and beach patrol during the summer as well. Red-flag conditions are to be avoided, and even yellow-flag days can be a little rough. 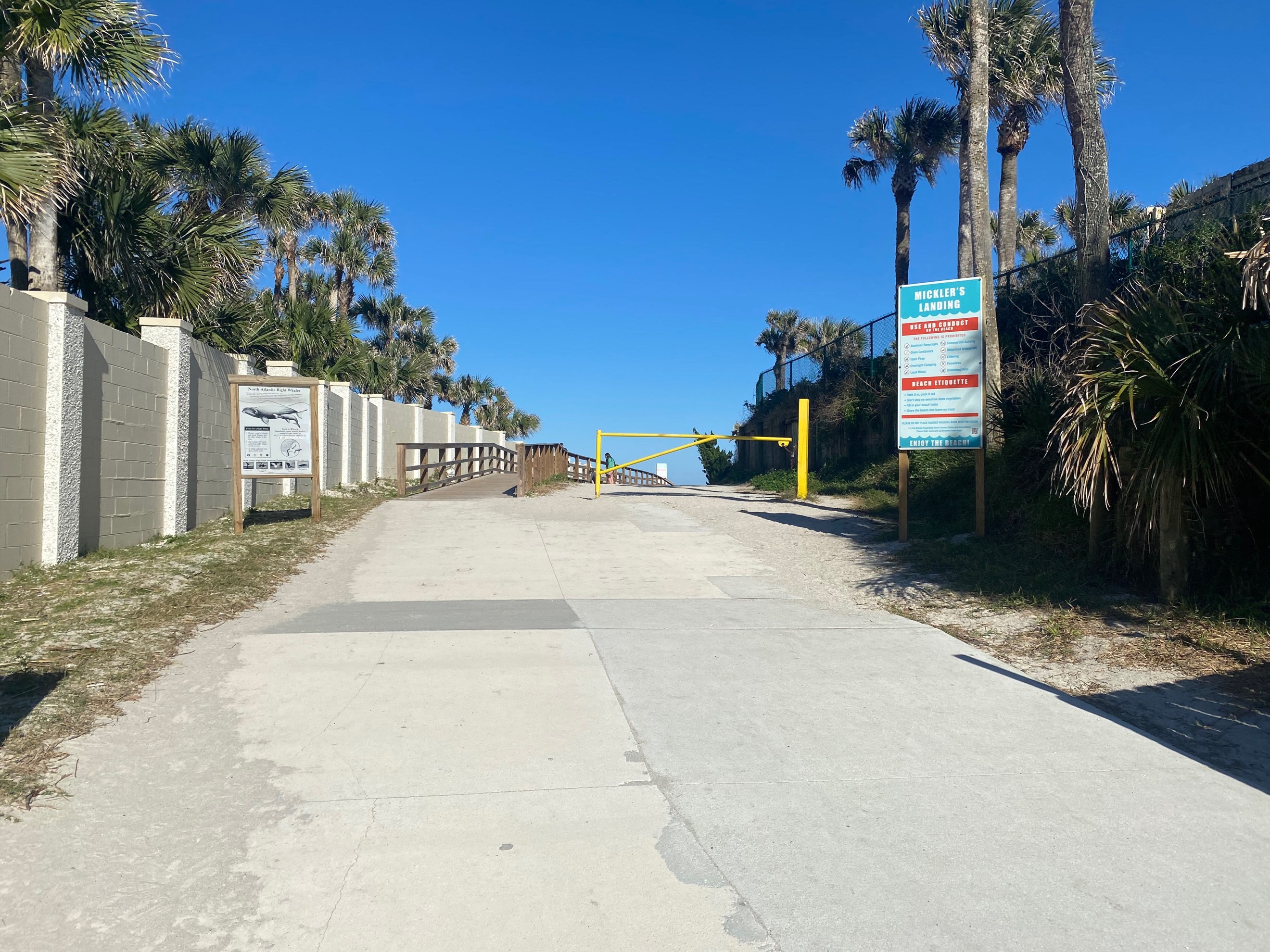 Mickler's Landing is a very, very quiet beach and is a good place to unwind. There are a few helicopters that occasionally fly by, but nothing like the Navy's F-22 formations that roar overhead at Jacksonville Beach. There are no shops nearby to get shirts or taffy or cheese fries. Bring a shelling bag, a shell scooper, a camera, a bottle of water, and a chair. Anglers might catch some pompanos. Cell phone reception here is good, so take a few minutes to pick out a new restaurant to have dinner, like Hoptinger's just a few miles north of here in Jax Beach when the day is done.